Almost a hundred years after Auda Abu Tayi, Al Sherif Naser, and British soldier T.E. Lawrence (also known as Lawrence of Arabia) led Arab troops on camels and horseback through the unforgiving Arabian desert to orchestrate a surprise attack on the Ottoman forces (allies of Germany) in Aqaba, and set into motion important events that would eventually lead to victory during WWI, a convoy of a different kind undertook the same course through the moonscape of Wadi Rum in Jordan. They passed olive groves and barren valleys and rugged mountains. The occasional patch of green. Low-roofed homes, some ramshackle, and busy villages where curious faces looked up with curious eyes. And the mighty desert of Arabia.

Before you struggle to picture a very not-athletic me trudging along the magnificent desert on camelback, I’ll reveal that my journey was far more comfortable thanks to Ford Middle East who took me across Jordan, from the magical Dead Sea to the awe-inspiring ancient Nabatean city of Petra through the desert landscape of Wadi Rum and the Red Sea town of Aqaba, in their impressive current line-up of SUVs and trucks- the new Ford Edge, Expedition, F-150 and Ranger. 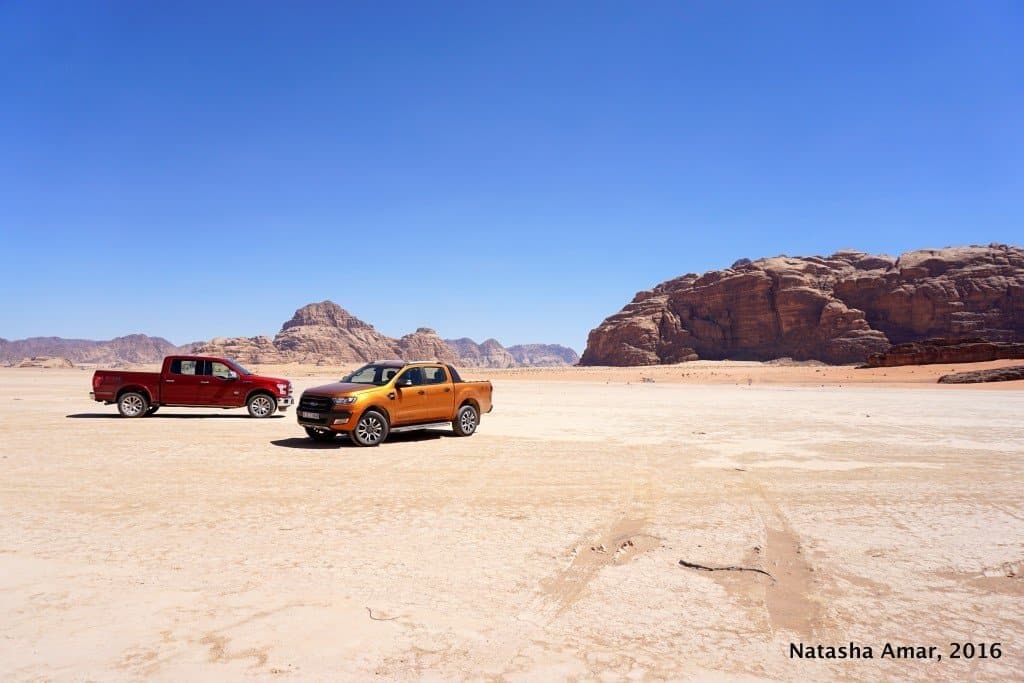 Floating in the Dead Sea

You can’t come to Jordan and not go to the Dead Sea or so I’d been told. Considering that my hotel on the first night was the Kempinski Ishtar Dead Sea with its own private beach, it would have been silly not to go. So I woke up early on my first full day in Jordan and stole a precious fifteen minutes to experience the magical feeling of floating in its buoyant waters without even trying. I was lucky to have the beach all to myself. It was pure bliss! 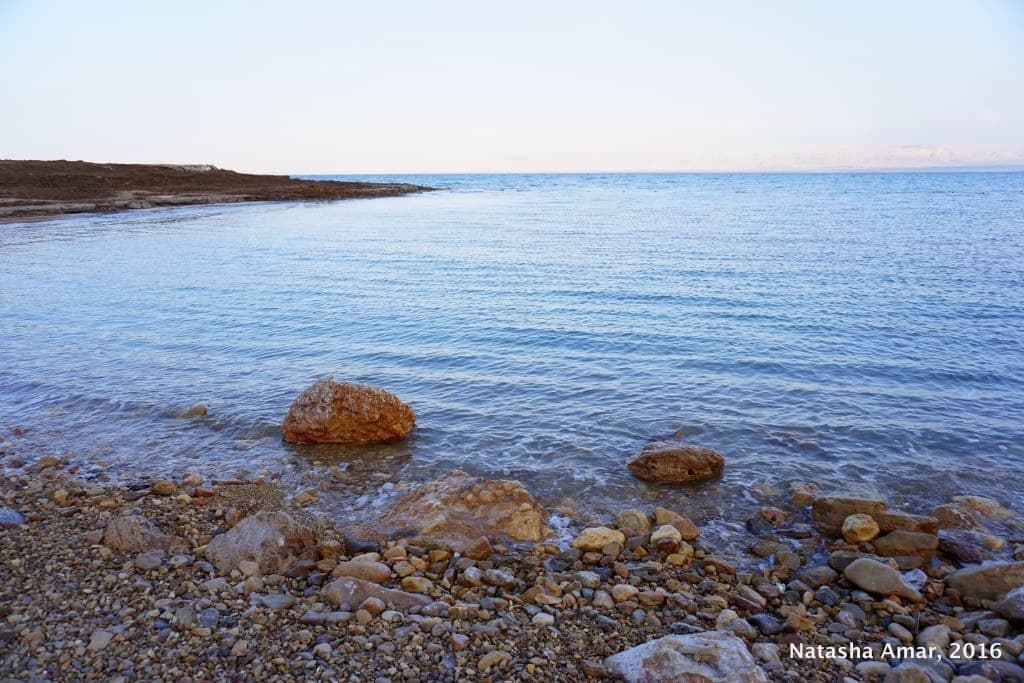 The Dead Sea, at 400m below sea level, is the lowest point on earth. The sea receives many incoming rivers, including the Jordan River, all of which become landlocked here and eventually evaporate leading to a high concentration of salts and minerals with qualities beneficial to the skin and other health aspects.

(Tip: Do not shave just before a visit to the Dead Sea. The high salinity means it will burn more than you think and obviously, don’t put your face in unless you like the feeling of salt in your eyes.)

A Road Trip: Better than a History Lesson

Over three days, I got to explore Jordan on a fascinating road trip that was better than any history lesson and follow in the camel tracks of the legendary Lawrence of Arabia. The trip to the ancient city of Petra, a UNESCO World Heritage Site was an amazing bonus organized by Ford.

Watch the video of the road trip here:

The 1917 march to Aqaba was important in the greater landscape of the war. The Red Sea port of Aqaba was being used by the Ottoman Empire to plant mines in the Red Sea and the Allies feared that it would fall into German hands that would use it as a submarine base. Securing the port could provide safe passage for supplies for the Arab Revolt and put pressure on the Ottomans and their German allies. The Ottomans, in control of the port, were prepared to face any troops approaching through the sea but they didn’t expect to be attacked on land, the only access point being a desert that was thought of as impossible to cross.

British officer T.E. Lawrence, who was already familiar with the Bedouin tribes of the Arab world having lived and worked in the region earlier, developed strong ties with Emir ­­­Faisal I and joined the Hashemite forces in 1916. Along with Auda Abu Tayi and Al Sherif Naser, representing Emir Faisal I to whom he was advisor, he led the troops to Aqaba over a journey that lasted two months.

He wasn’t fully supported by his country in this seemingly overambitious endeavor; they had sent him into the region only as an advisor. The 22,000 British gold sovereigns he was carrying helped to recruit fighters from the tribes and increase the size of the Arab forces to 5000 men before they reached Aqaba. The decisive battle was fought at Abu al Lasan between Ma’an and Aqaba on July 6, 1917 and the victory of the Arab forces over a mere 450 Ottoman soldiers, all of whom were either killed or captured, was a major turning point in the war.

During the Arab Revolt, Lawrence lived in Wadi Rum, also known as ‘Valley of the Moon’, a desert landscape of reddish gold under the ruthless scorching sun. As our Ford Expedition navigated the terrain with ease, my eyes scanned over the expanse of sand, rock formations, and thorn bush that stretched on endlessly for miles; the same terrain where Lawrence drove a Ford Model T, a hundred years ago. With all the romanticism that flavors the depiction of Bedouin life in the desert in books and movies, the harshness of the desert is something that hits you only when you’re there for yourself.

If you’d rather stay overnight in Wadi Rum, there are luxury desert camps in Wadi Rum that you can stay at. 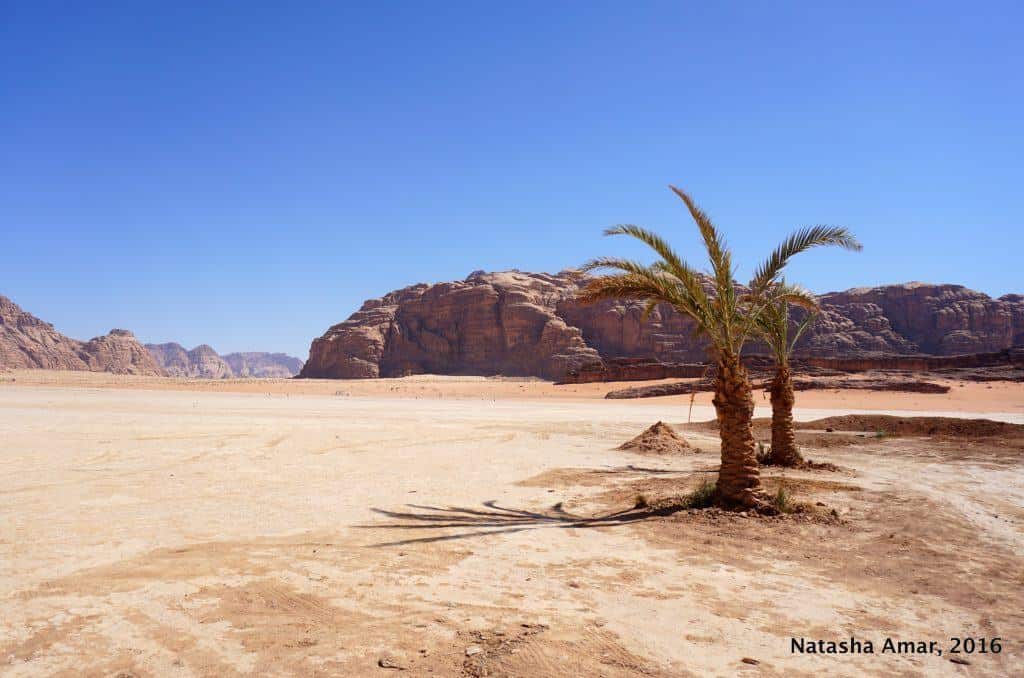 After a lunch stop at a traditional desert camp, we stopped for photos at Jabal Al Mamzar, a massive rock formation of seven folds, that inspired the name of Lawrence’s book ‘Seven Pillars of Wisdom’. Here in the barren backdrop of the desert under the open sky, Ford’s SUVs looked even more remarkable. 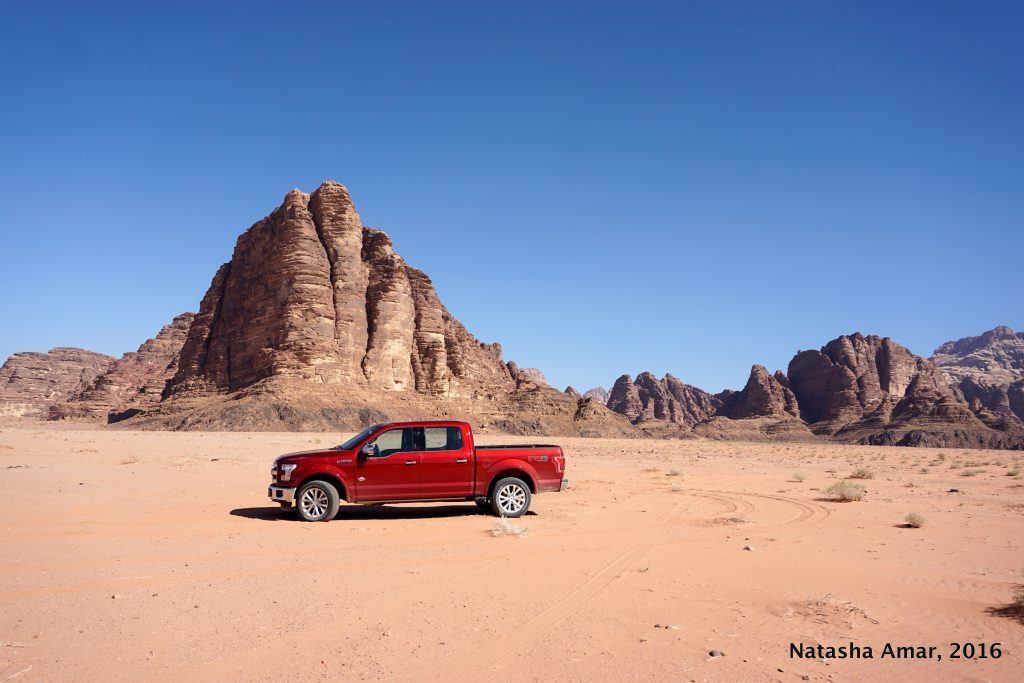 But the heat of the desert wasn’t to be taken lightly, after a few minutes outside the comfort of the vehicles, I had to put away my camera and rush back inside.

In better weather, a unique way to experience the desert might be to experience a luxury overnight camp in Wadi Rum, something that is on my bucket list for my next trip to Jordan.

Travel back in Time on a Railway Carriage

“You’re in for a surprise,” Rasha, one of the coordinators of the trip, told us and then almost spilled something about a “train ride” as we are drove through Wadi Rum. Thirty minutes later, like a group of wide-eyed children, we were looking excitedly at a train that seemed right out of a period film chugging along slowly in our direction.

The Hejaz Railway that ran from Damascus all the way to Medina was built by the Ottoman Empire with German support between 1900 and 1908 and used by them to transport soldiers and supplies to their stronghold in Medina and to further establish their control over the region. Together with the tribes and Arab forces trained in the use of explosives, T.E. Lawrence led and coordinated several attacks on the Hejaz Railway using guerilla warfare methods.

As we rode the train a short distance through Wadi Rum, the mood was far less sinister. We stuck our heads out of the window and welcomed the breeze on the hot summer day. Then, we heard gunshots and explosions. Smoke billowed out of the rocks and bushes and the train came to a halt. Tribesmen on horses and camels, wielding swords and rifles, and accompanied by a bunch of modern Bedouins in Ford SUVs, approached the train and took a few passengers hostage. Those passengers, in turn, brandished their cameras and posed for photographs with the camels, fighters, SUVs and the replica Rolls Royce armored car that was rightly the subject of much attention. 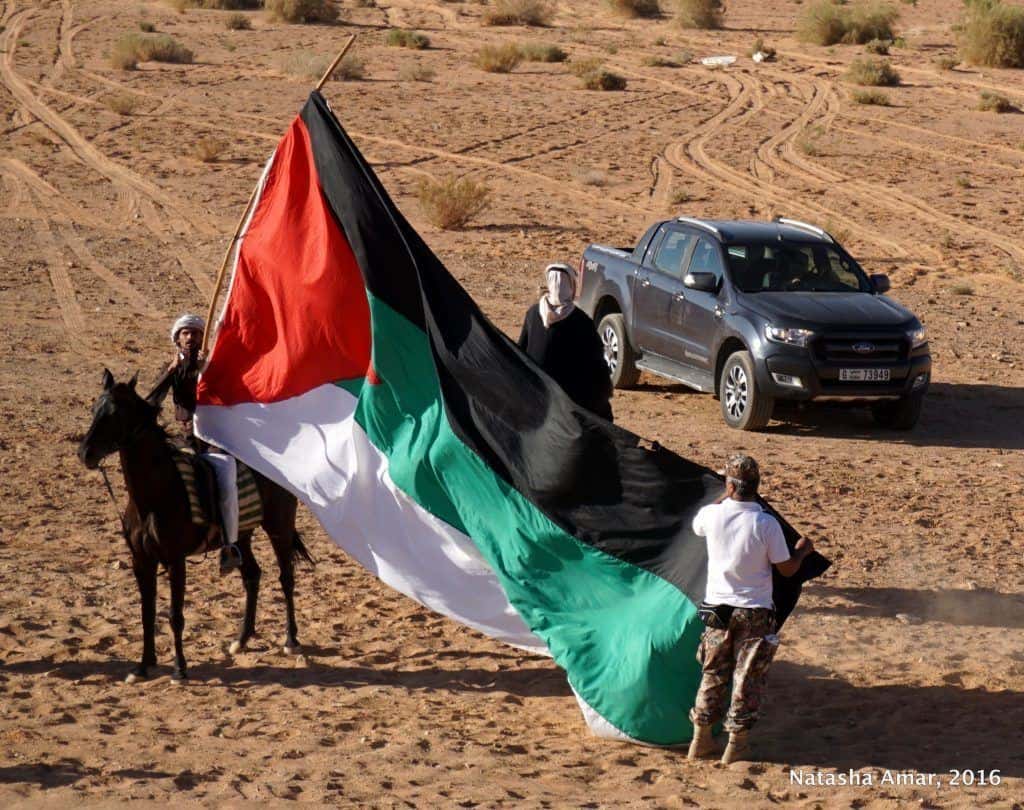 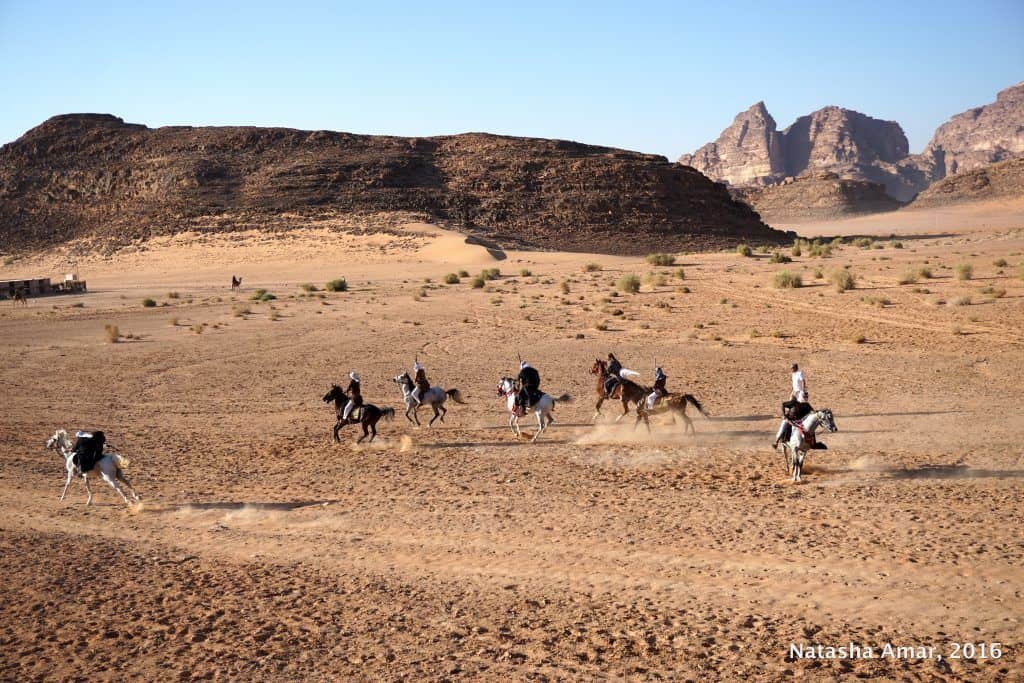 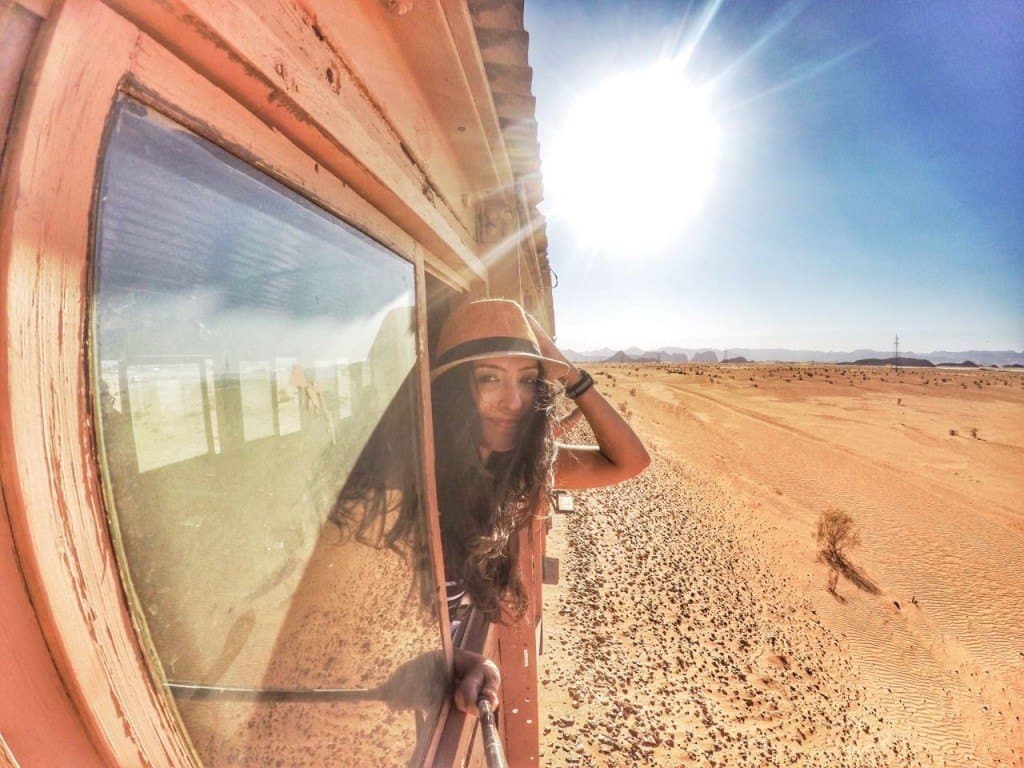 To experience Wadi Rum in this unique way, check the tours offered by the Jordan Heritage Revival Co., a company that organizes re-enactment tours in Wadi Rum on the old Hejaz Railway.

To Aqaba: Sailing on the Red Sea

Barely had we arrived at the Kempinski Hotel Aqaba after a long sweaty day in Wadi Rum, that we were whisked off to a lovely boat cruise to enjoy the sunset over glasses of wine. In the distance, Jerusalem glittered with a million lights under the night sky. 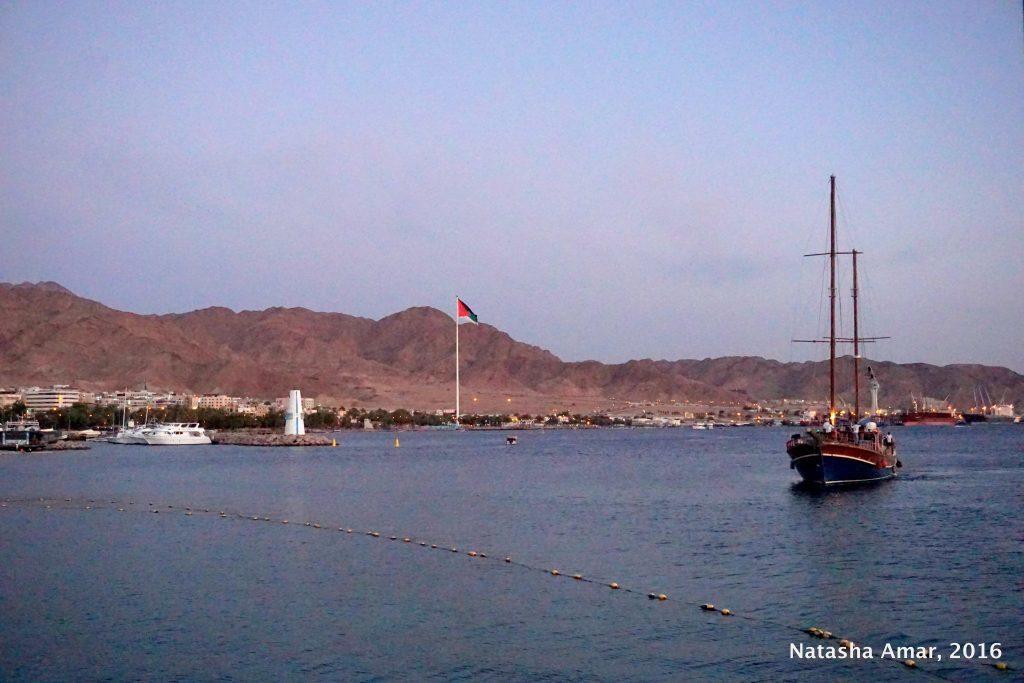 Aqaba is a lively town that makes for a great base to explore Wadi Rum. With a rich marine life, it offers excellent opportunities for snorkeling and diving.

Visiting Jordan? Here’s a packing list for Jordan to help you plan your trip.

The Rose City of Petra

Nothing compares to laying your eyes for the very first time on the rose-colored city of Petra, carved into the sandstone rock, or of walking through the Siq, its swirling 1km long canyon with smooth sandstone walls sculpted by rivers over time, that seems like a portal into another world.

The former capital of the Nabatean Arabs is a UNESCO World Heritage Site and one of the new Seven Wonders of the World. Discovered in 1812, more than 90% of Petra still remains to be explored and there is plenty of scope for archaeological discovery. 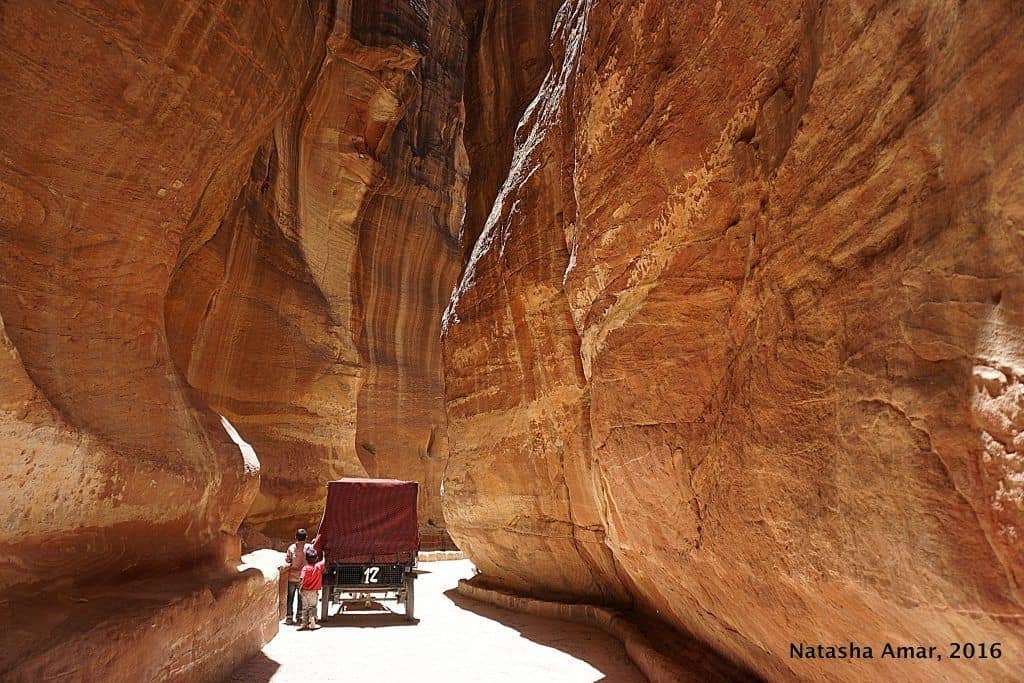 The canyons of Petra

Our short time there only allowed for the 45-minute hike to Al Khazneh, or the Treasury. Dating from the 1st century, the 43m high façade is perhaps one of the most photographed monuments in Petra, and rightly so. The sheer craftsmanship and the intricate details on the façade that was built as the tomb of a Nabatean king make it hard to believe that it was carved in the 1st century. 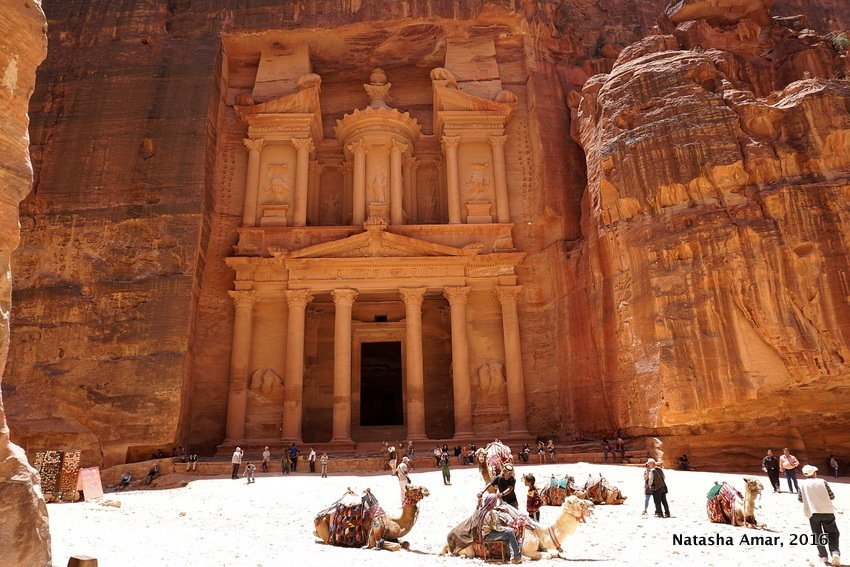 Petra’s appeal doesn’t just lie in the pink sandstone rock that takes on myriad hues as the sun moves across the sky during the day but also in the theatrics that play out in what is Jordan’s busiest tourist attraction. The residents of nearby Wadi Musa and Bedouin settlements pepper its narrow alleys and the Siq selling handicrafts, pottery, and Bedouin jewelry. Dark-eyed, dreadlocked Bedouins offer camel rides to tired tourists who’d like yet another camel photo. Young Jordanian boys follow you around trying to negotiate deals on postcards of Petra. You gingerly step out of the way as you hear the approaching tick-tock of a horse drawn carriage. Together, it all works seamlessly to add to the magic of Petra. 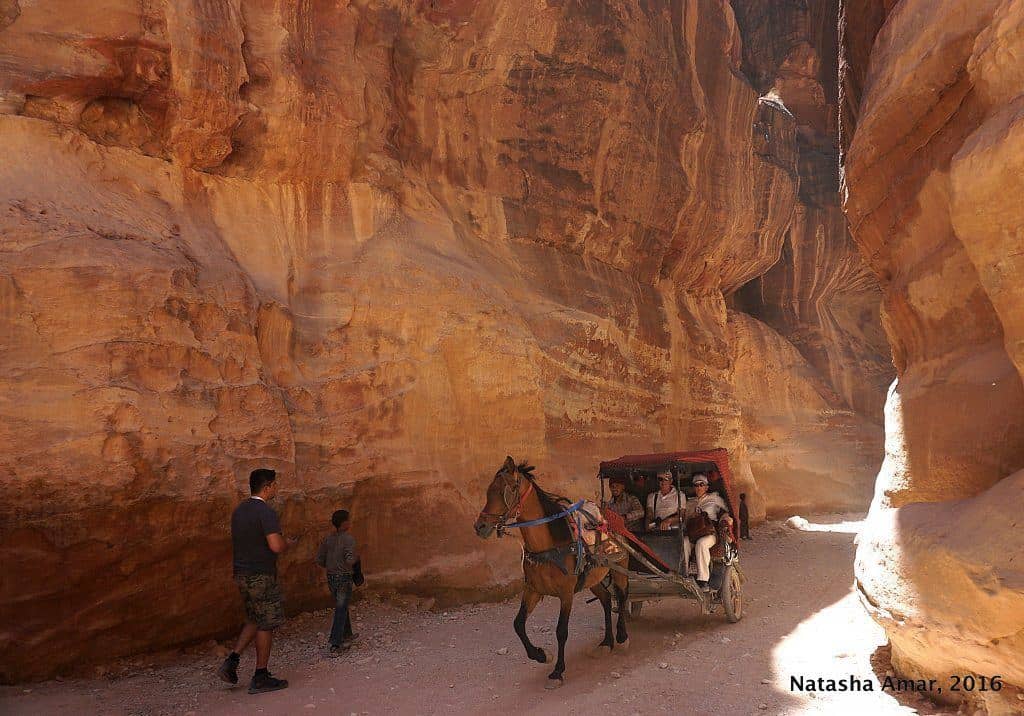 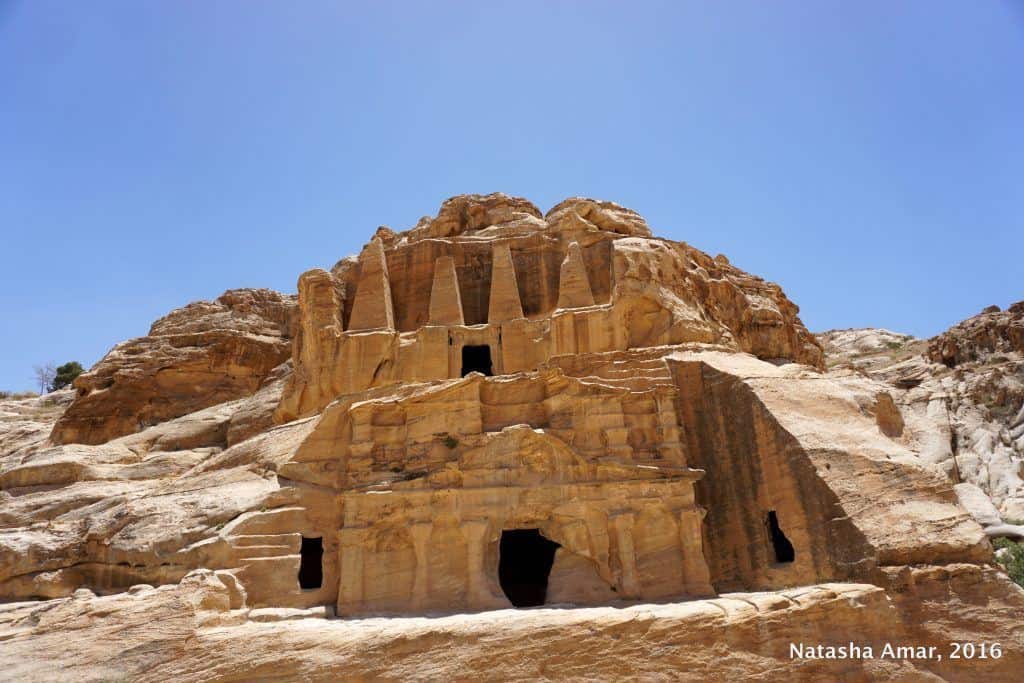 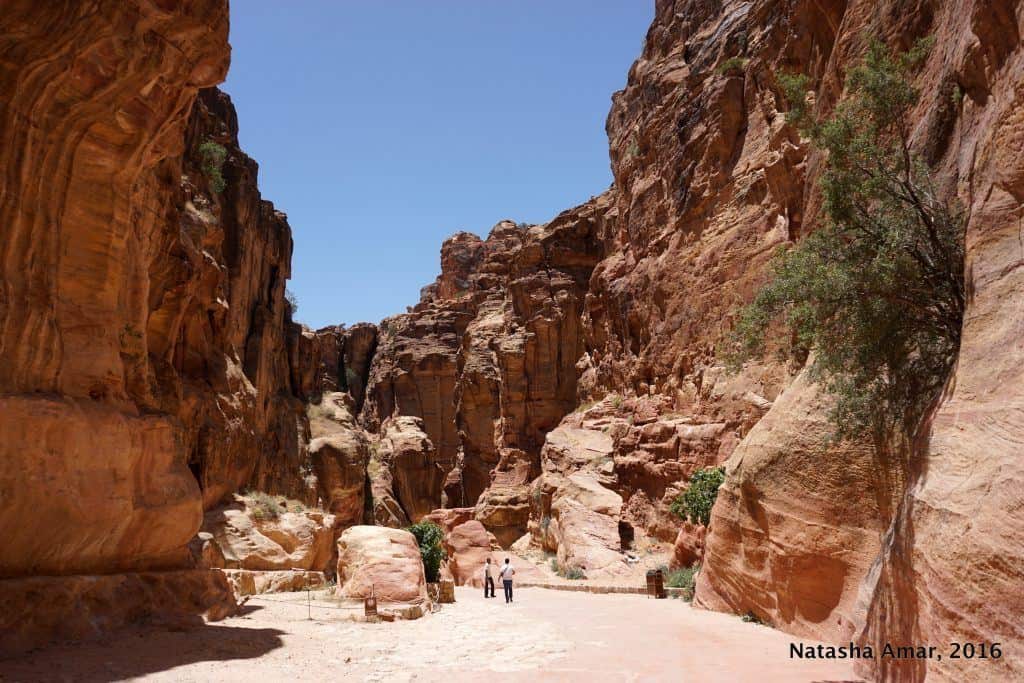 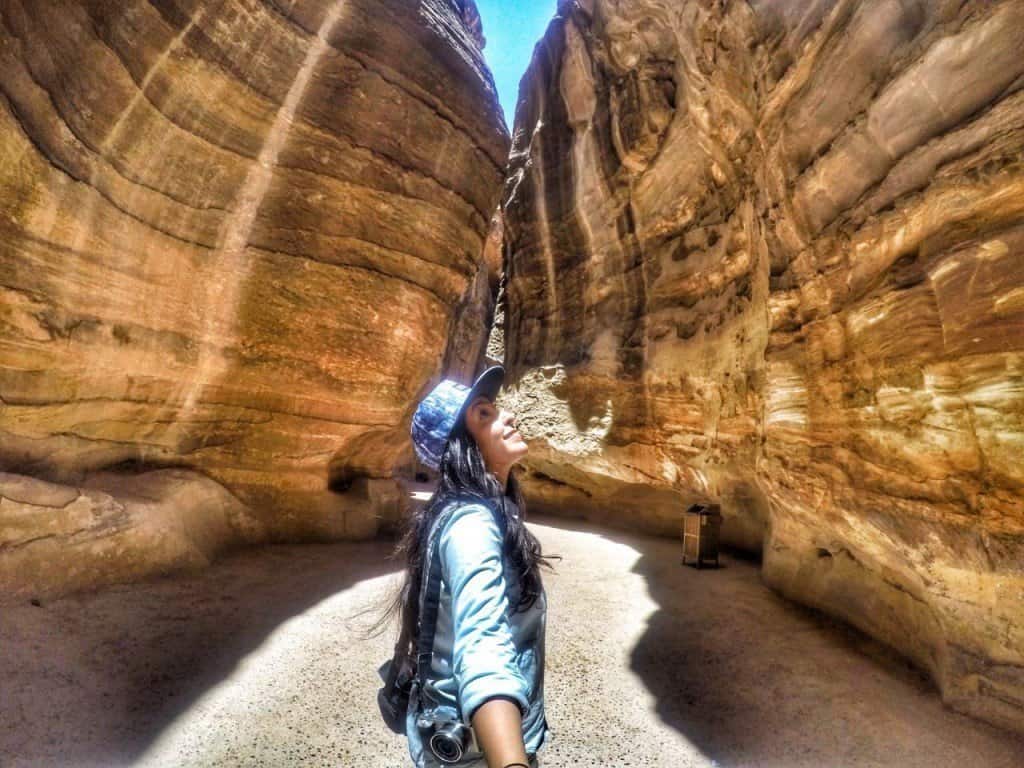 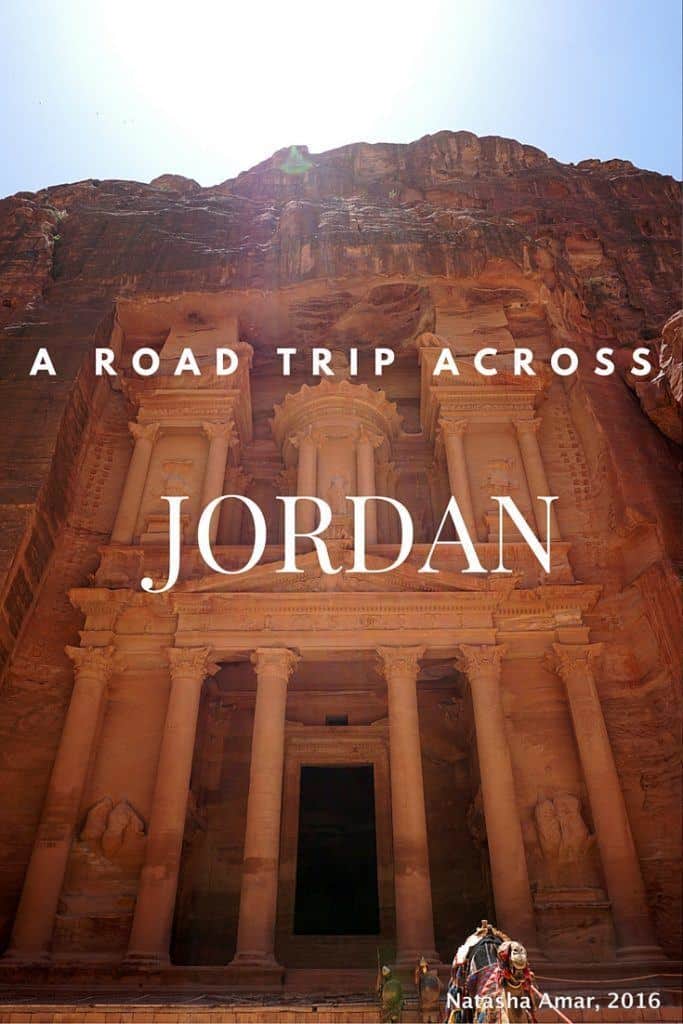 I visited Jordan as a guest of Ford Middle East and Visit Jordan. All opinions, as always, are my own.

What a great way to explore and experience Jordan! Love the posts and seeing Jordan through your eyes.

This sounds like the most amazing adventure! Jordan and Petra have been on my list for so long and your post sounds like exactly what I want to do! Thanks for giving me a push to get it done!

I hope you get to visit soon. Petra is unbelievable!

Your trip sounds amazing Natasha. I was in Jordan just as the Arab Spring began. The people there are so warm and friendly and they couldn't understand why tourism had dropped off when their country was not one that was affected. I adored the food too - so healthy and fresh. And Petra! So moving. Thank you for sharing your journey with us Jane

Thank you Jane! Yes I agree the people are really warm but that is true of most countries in the Middle East, one of the most misunderstood regions in the world.