Imagine you’re a five-year old with your eyes closed and one hand in a bag of treats as you carefully try to pick one. Now imagine you open your eyes and SURPRISE the owner has left you the entire bag.

That was pretty much my life this summer.

Except, that for candy, I got to enjoy the diverse flavors and colors of the many countries I traveled through over three months. The fitting grand finale of my trip was a journey along the TRANSROMANICA Cultural Route of the Council of Europe that took me through Austria and Serbia to discover Romanesque heritage in grand cathedrals, medieval castles, and mystical monasteries.

TRANSROMANICA is one of 32 Cultural Routes of the Council of Europe that take you through the shared heritage of different countries in Europe and beyond and promote human rights, cultural democracy, diversity, and cultural exchange.

TRANSROMANICA promotes Romanesque art and architecture along a route that connects eight countries (details here) and their conservation through sustainable tourism. Other Cultural Routes are focused on themes as diverse as thermal towns, Jewish heritage, ceramics, and personalities such as R. L. Stevenson and Napoleon. 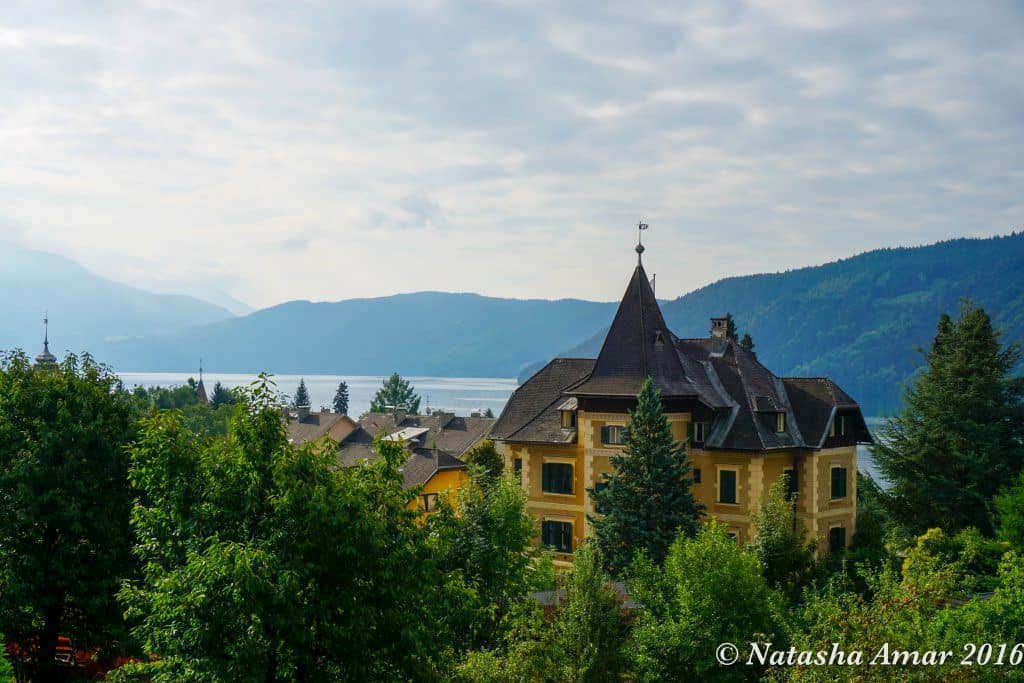 This quaint village on the northern shore of Lake Millstatt, Carinthia’s second-largest lake, was our first stop. There’s an interesting story behind the name that comes from ‘mille statuae’ or the 1000 pagan statues that were thrown into the lake by Emperor Domitian who was among the first to convert to Christianity and is said to have built the first church of Millstatt.

The history of the village is deeply linked to that of Millstatt Abbey, a former Benedictine Monastery founded in 1070 by a Bavarian count and his brother that was owned by different religious groups over its life until it was finally dissolved in 1773. One of the most important Romanesque buildings in Carinthia, it was the seat of culture and religion in medieval times.

The building that stands today dates from the 12th-century and serves as Parish Church of Christ the Savior and All Saints. It houses the monastery museum and the collection also includes a Romanesque shrine from the 1140’s, a historic dungeon from the 16th century, and a Renaissance chest. The most striking features of the Abbey are the red Bavarian style twin domes, the grand frescoed entrance, and the Romanesque cloister with carvings of animals on the columns and arches. 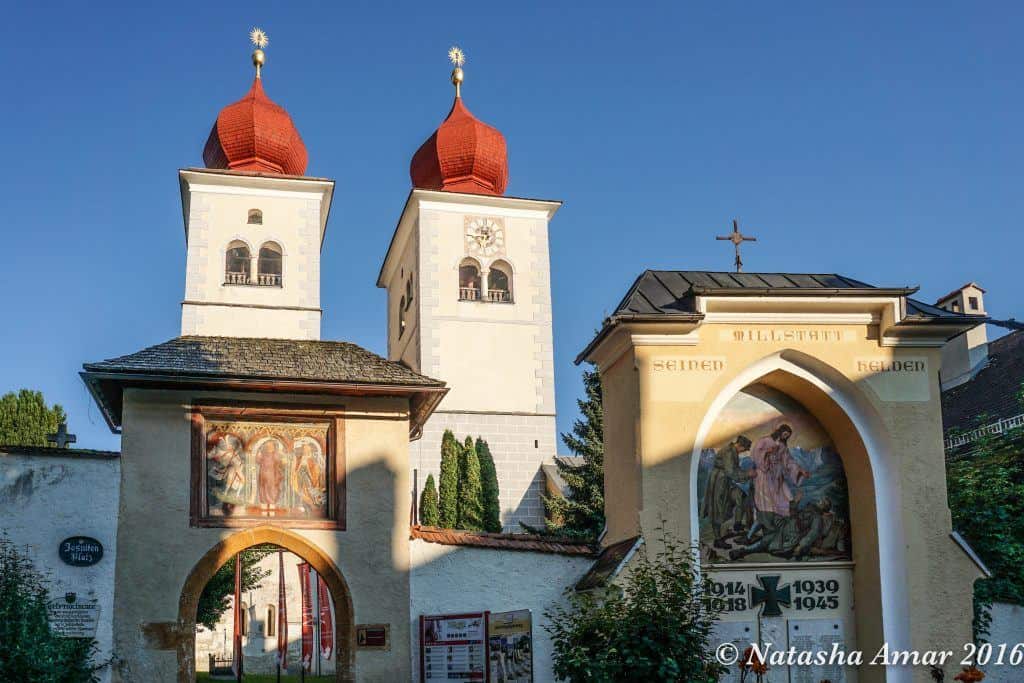 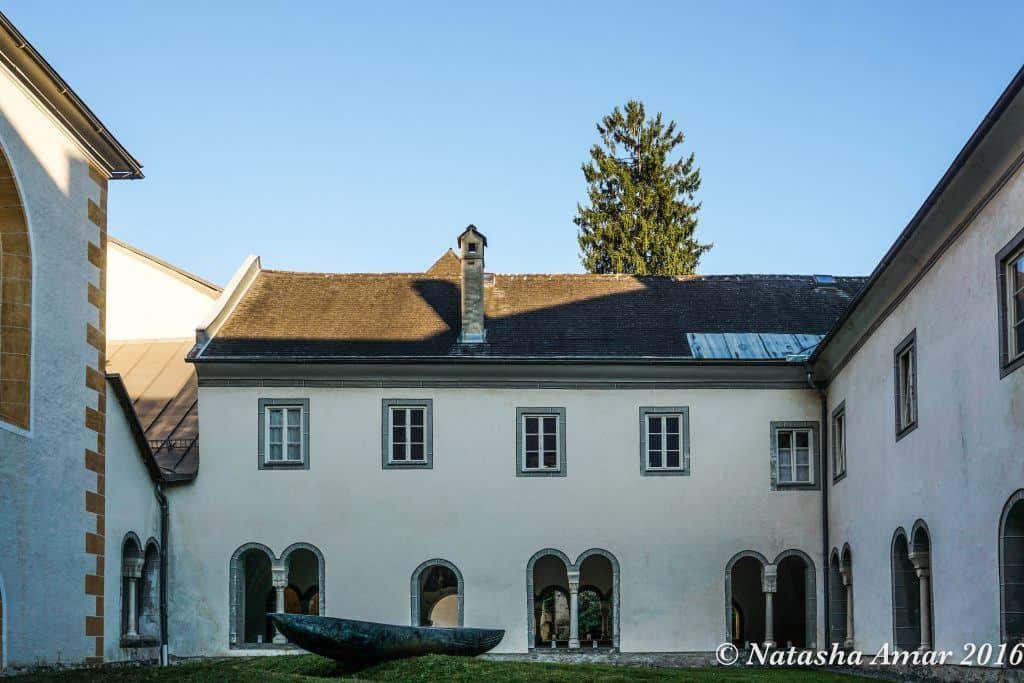 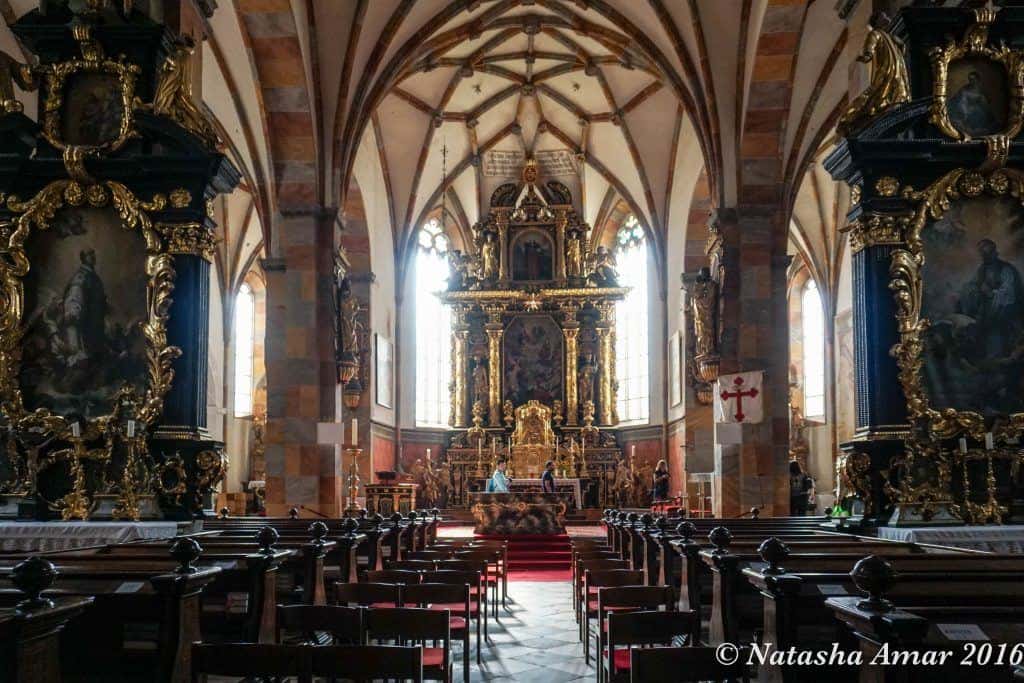 It was here that we had the chance to meet with musicians from the group Harmonia Variabilis, just before their concert of medieval music in the church. I was quite surprised to learn that the instruments used to play this kind of music are medieval and the musicians of the group had to go to great lengths to find and then learn how to play them. Remember this was about 30 years ago before the age of YouTube tutorials and when you couldn’t simply Google things to find them!

The medieval concert, in the setting of the exquisite Baroque altar, was a fascinating experience, the church resounding with songs of love and heartbreak, and the sounds of flutes, string, and rhythm instruments. 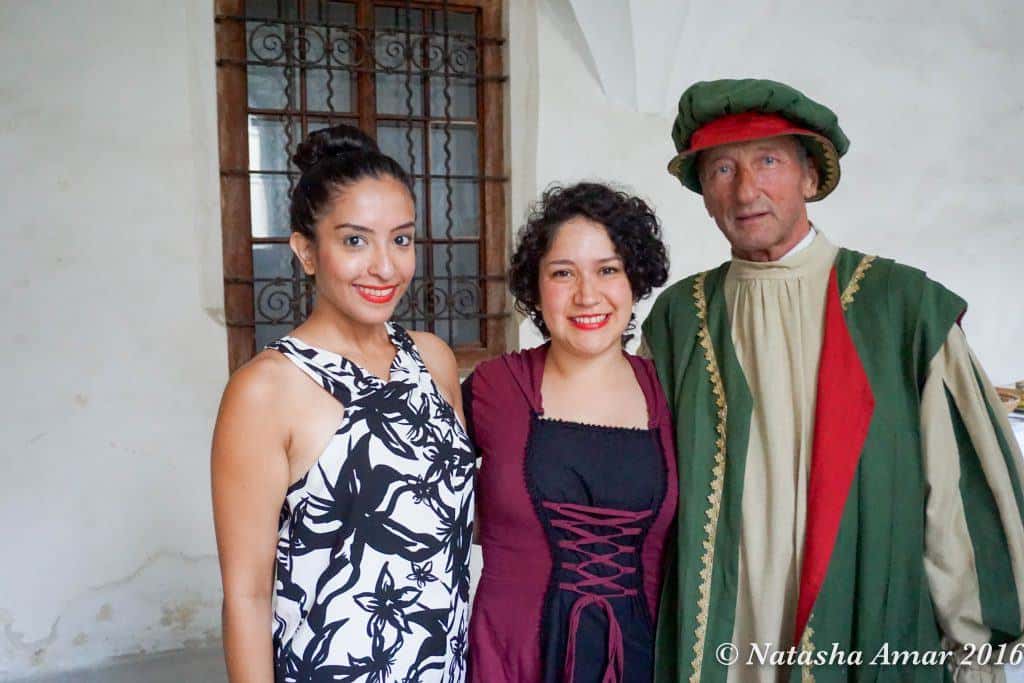 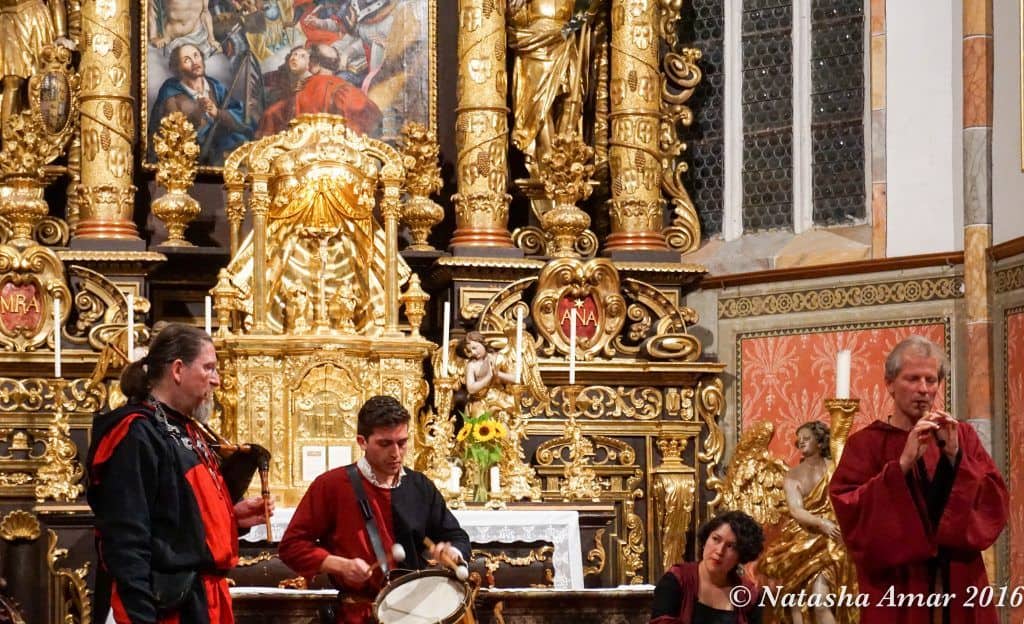 Tip: The concert was one of three as part of the TRANSROMANICA Journey of Sound. If you do plan a visit around August, it’s worth timing it so you can attend a medieval music concert.

We stopped for lunch at this lively resort town by Wörthersee, the largest lake in Carinthia, full of families enjoying the beautiful summer day at terraced cafés and restaurants, in the busy colorful market streets, and by the gorgeous lakeside promenade.

Over lunch, we heard what sounded almost like a procession in the streets. Astrid, our lovely guide in Carinthia, told us it was a wedding-related village custom, it would have been quite a wedding party! 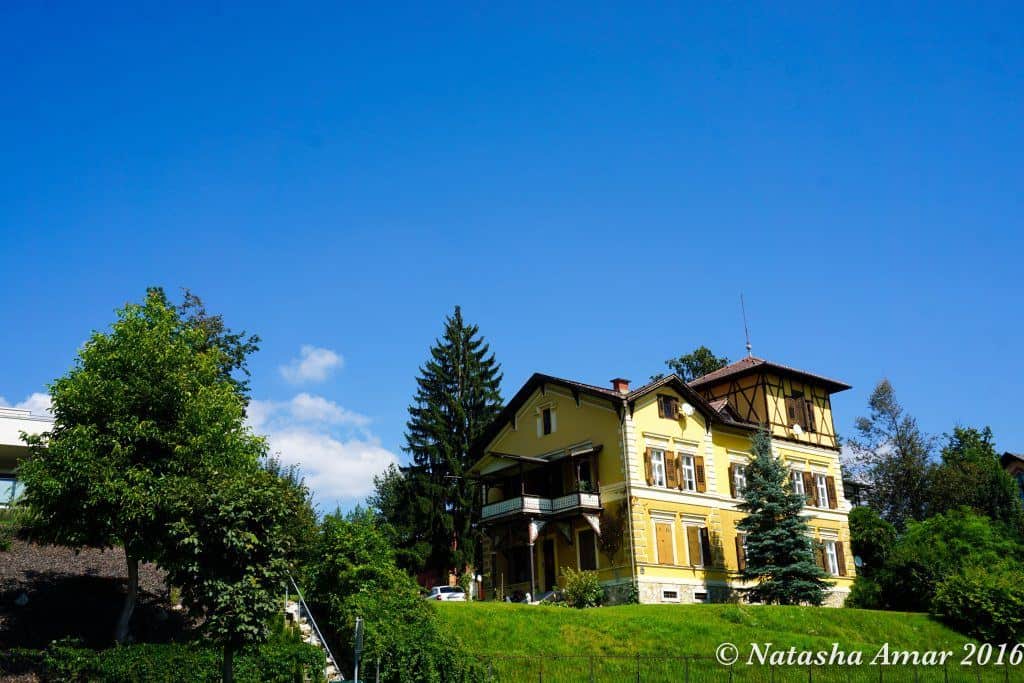 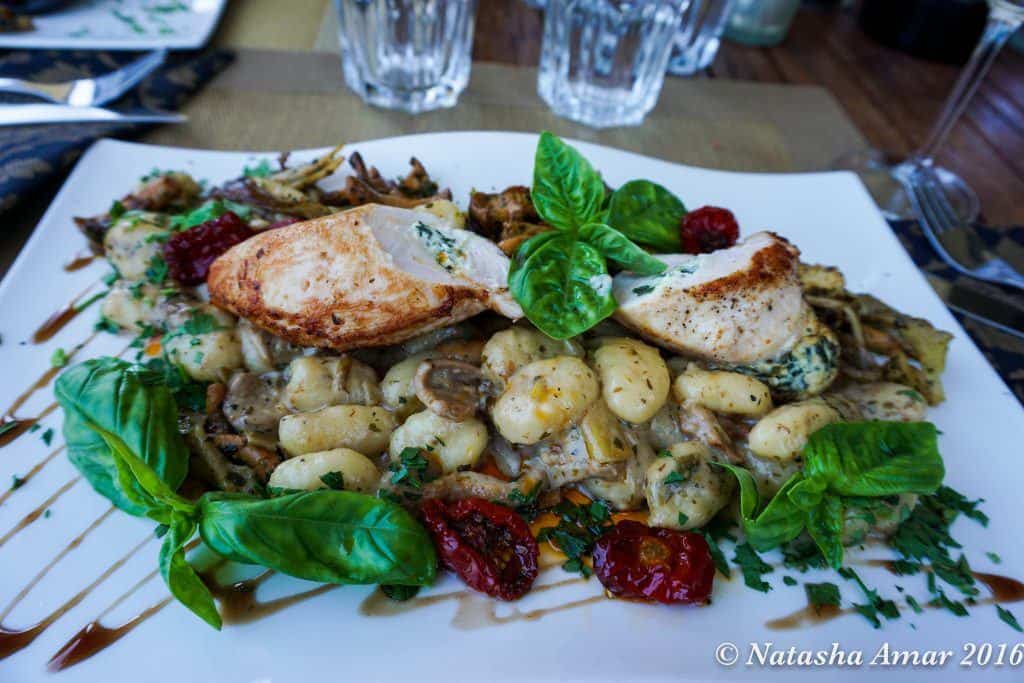 Tastier than it looked- Stuffed Chicken breast served with pasta 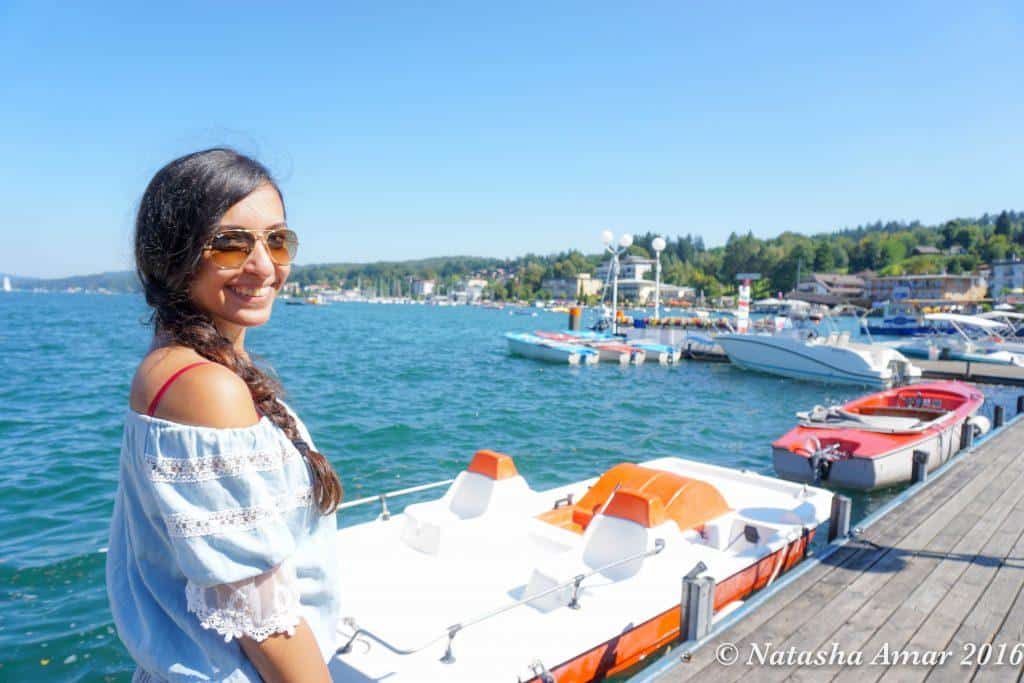 Tip: Velden is perfect for families with hiking trails and parks, lakeside activities, wine festivals, and a golf course. The water of Wörthersee is great for swimming in July and August with temperatures around 25 °C.

Maria Wörth is an idyllic village on a peninsula and one of the oldest settlements (6th and 7th-centuries) in the heart of Lake Wörthersee. Wörthersee translates into ‘Island Lake’ and the village was an island until 1770. Maria Wörth had great economic and religious significance in Carinthia. 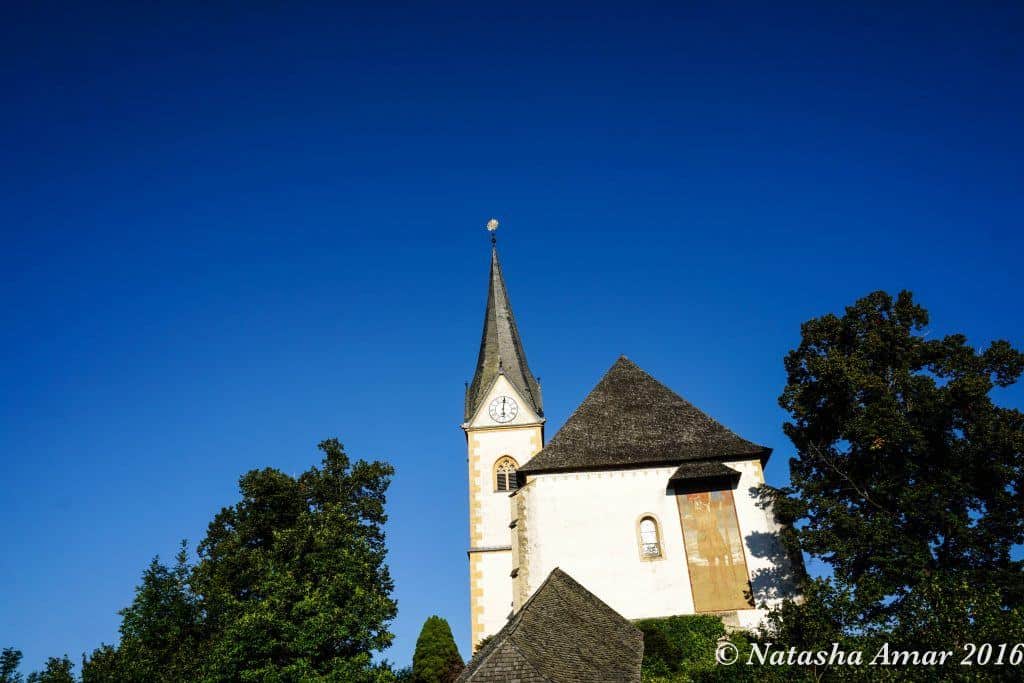 Church in Maria Worth

After Christianization, a church was built in 875 on the highest point of the peninsula. Eventually it was established as the church for the clergy and an important pilgrimage site. In the 12th-century, the smaller Winter Church was built close to it as a parish church for religious services open to the public. Both churches were destroyed by fire in 1399 and were later rebuilt in the Gothic style.

In the provost church, a Romanesque crypt houses the remains of two Roman martyrs and contains art from the 15th-century. The altarpiece of the church and most elements of the interior are in Baroque style. The architecture of the Winter Church is Gothic and you can see frescoes from the 12th and 14th –centuries. The beautiful location makes it a popular choice for weddings. 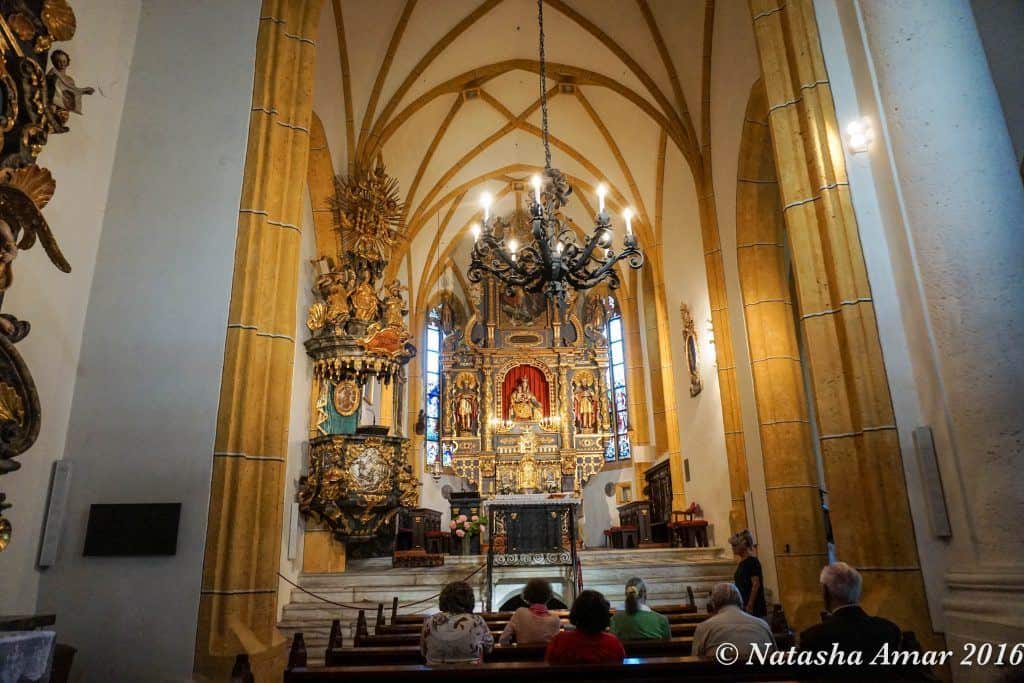 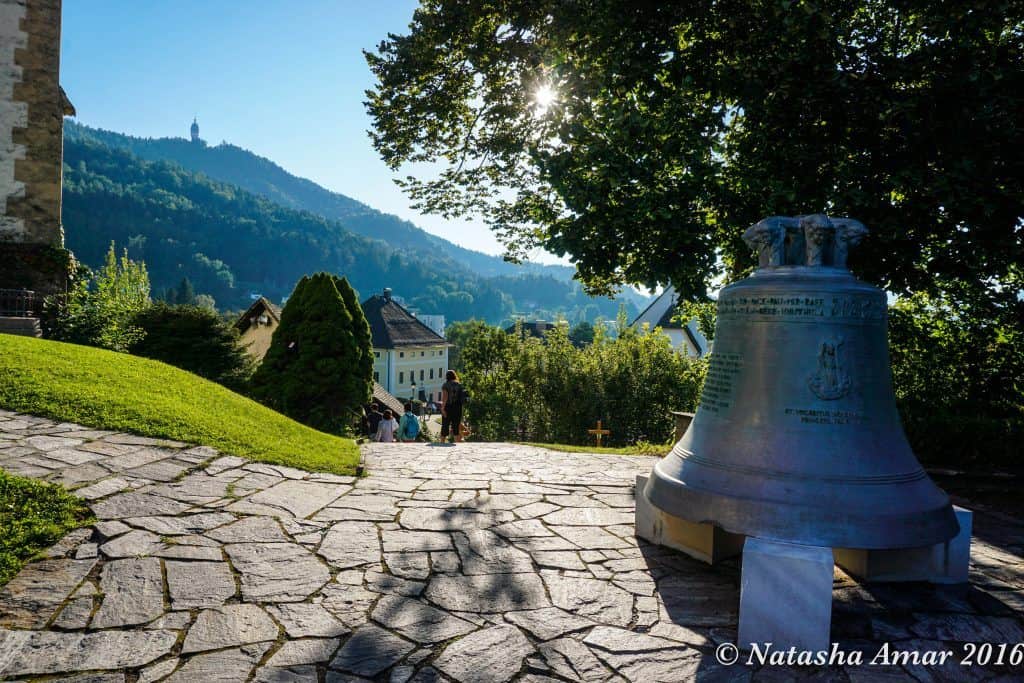 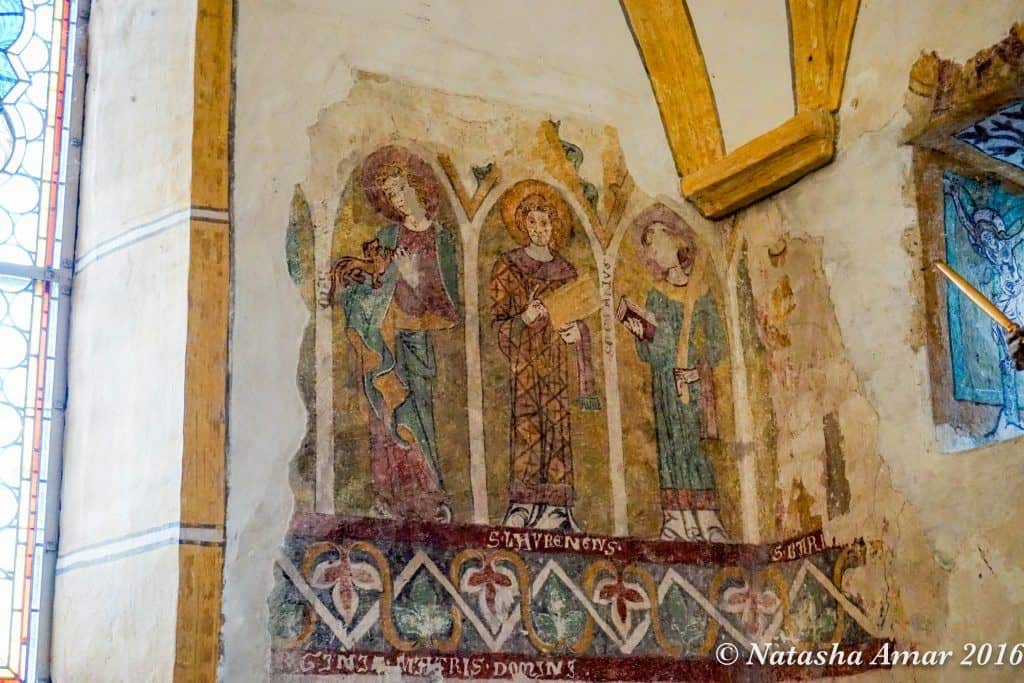 Frescoes in the Winter Church

While I knew I was going to see a lot of Romanesque architecture, I wasn’t expecting to see the modern and almost futuristic-looking structure that was the Pyramidenkogel observation tower on top of the 851m high Pyramidenkogel mountain. The 100m high wood and steel tower is the tallest wooden observation tower in the world. The view from the top over pristine lakes, dense forests, rolling meadows, and as far as the Alps and neighboring Slovenia, was spectacular. From up here, I got a real sense of the landscape of Carinthia.

While you can climb the tower either by stairs or a lift, there’s a more fun way to come back down. You can slide down at 25kmph in Europe’s longest covered slide (120m) that coils around the core of the tower! 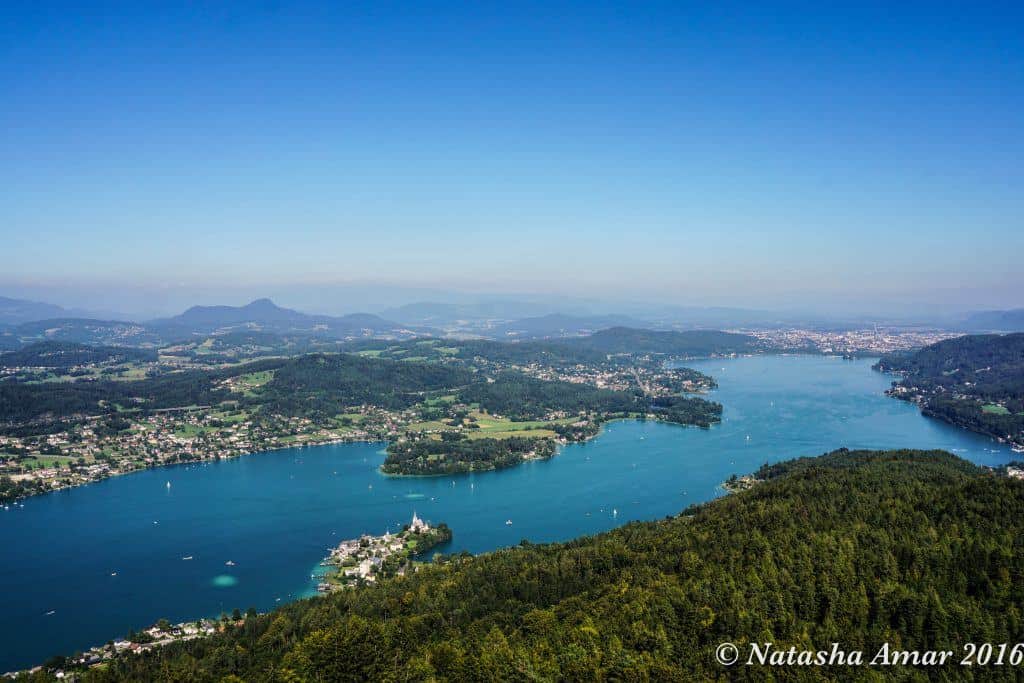 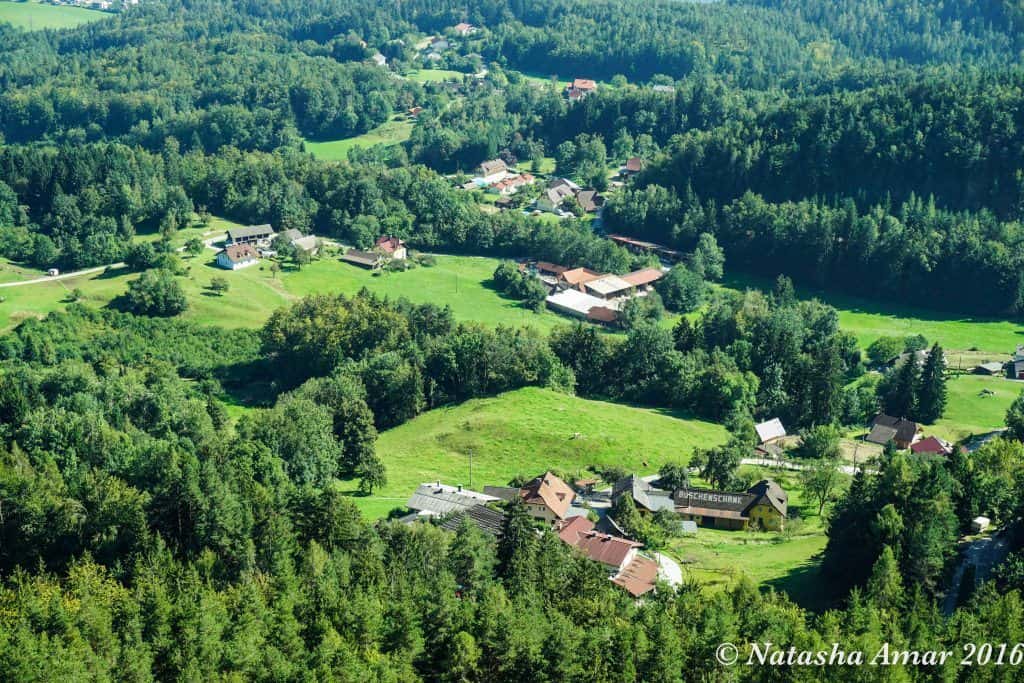 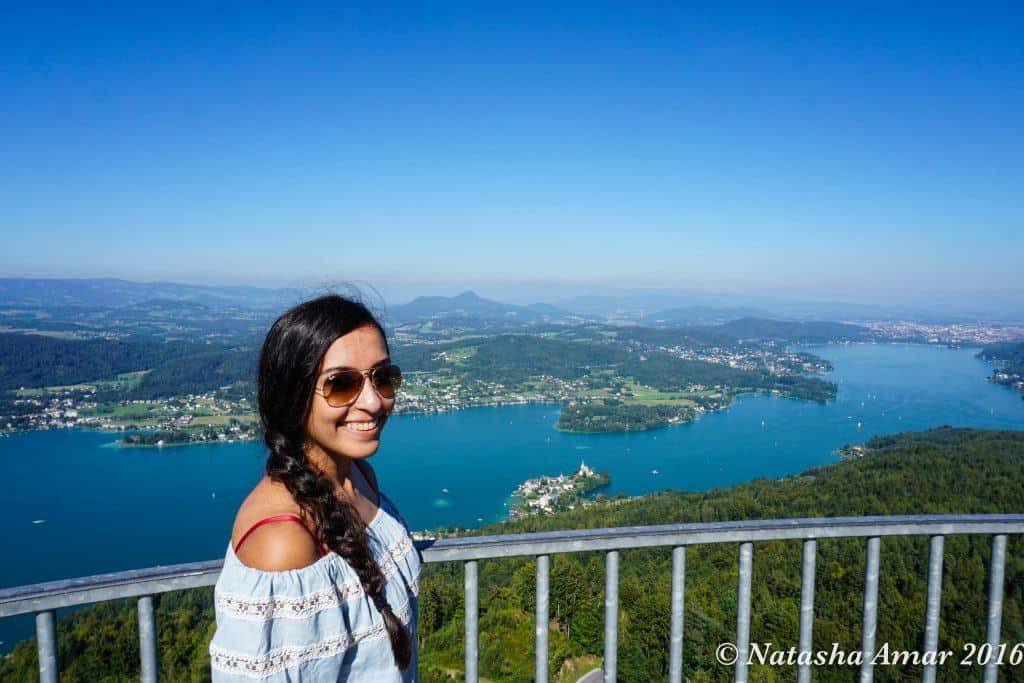 Tip: Free guided tours of the village are available during summer from mid-June to mid-September. Ask the local tourist office for details.

Friesach, the oldest town of Carinthia, was easily my favorite stop on the Austrian part of our journey (I’ll be doing a full post on it soon). During the Medieval Ages, it was an important trading town. With its fortified walls and moat, medieval castles and cathedrals, and lively town center, Friesach is the kind of place you’d love to explore on foot for a few hours. 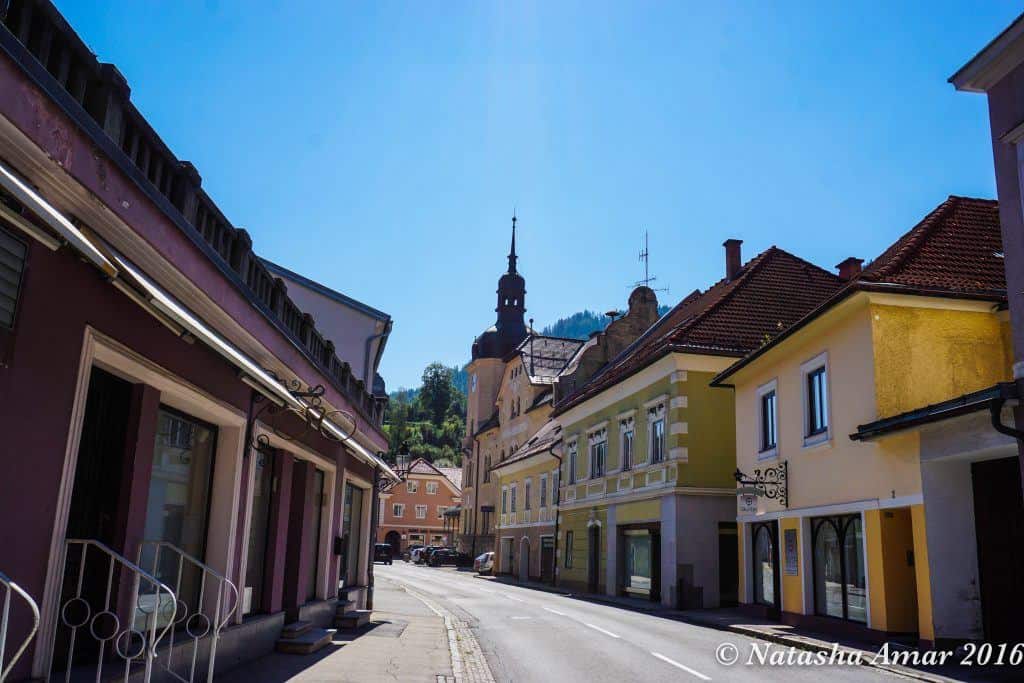 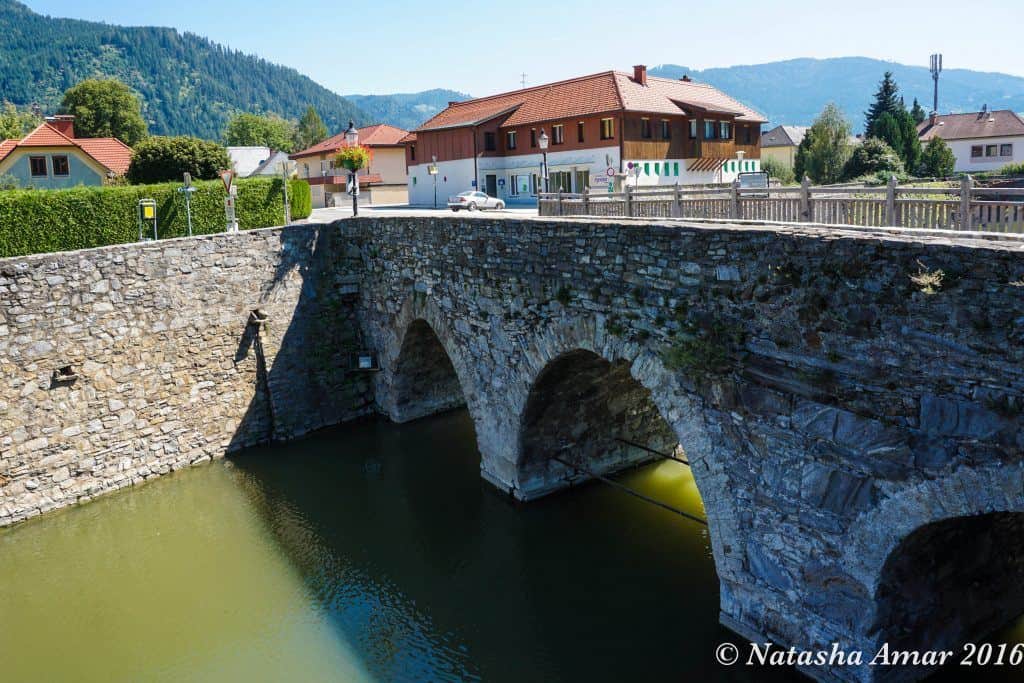 We walked through quiet cobbled streets flanked by colorful buildings, and up to the Castle of Petersberg on a hill overlooking the town. Built in 1076 by the Archbishop of Salzburg, today the castle houses the City Museum in the six storied chapel tower. Beautiful Romanesque frescoes adorn the walls of St. Rupert’s Chapel. The complex also houses the St. Peter’s Church with a Baroque interior and 15th-century art. 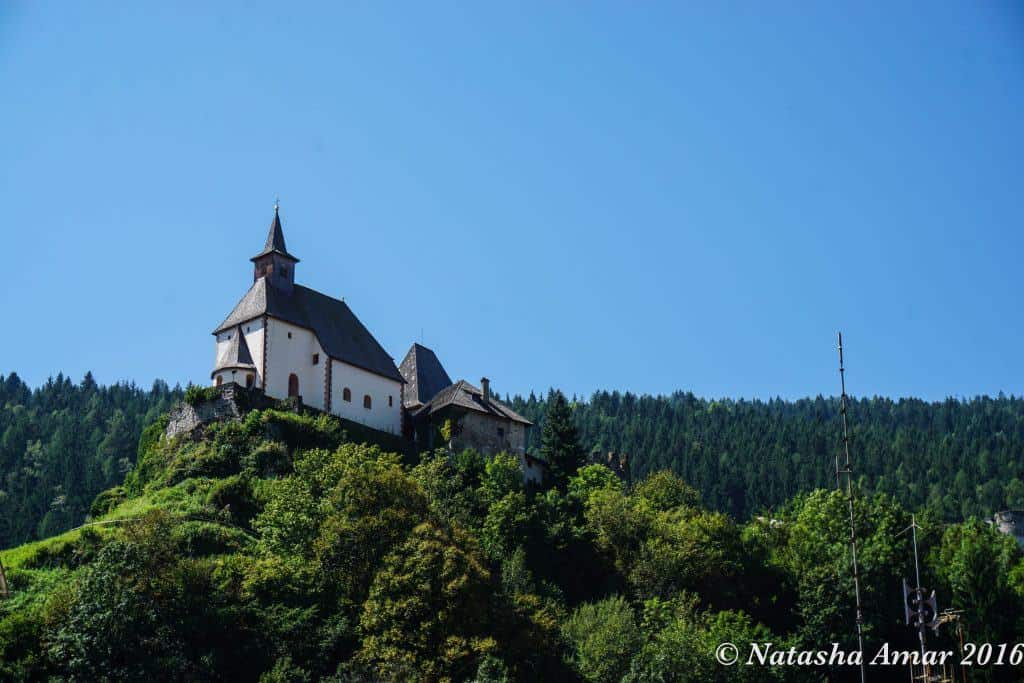 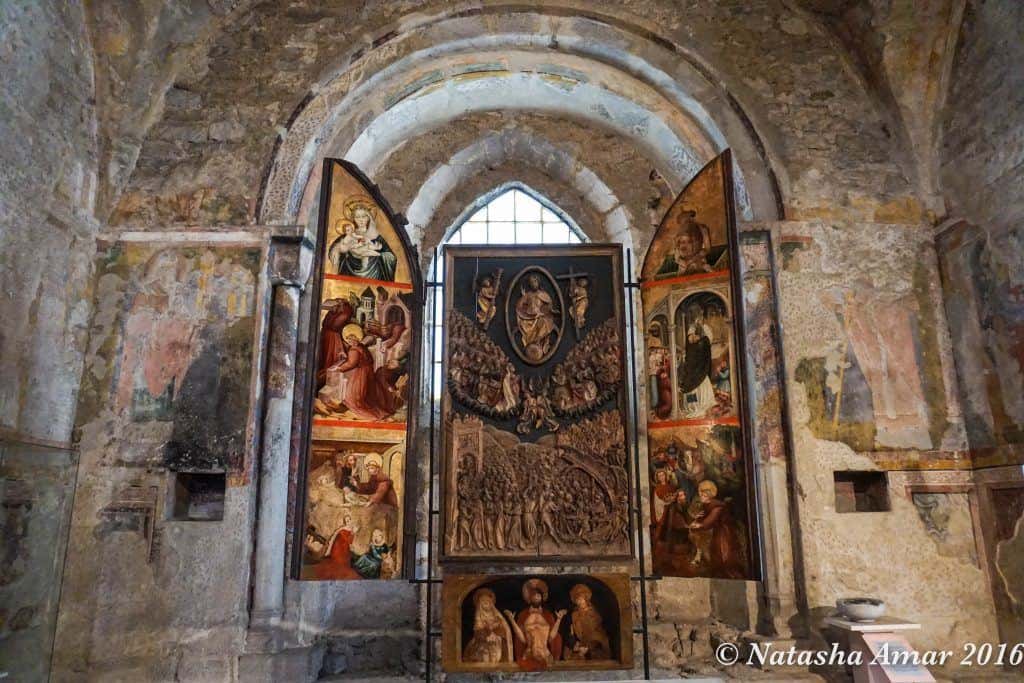 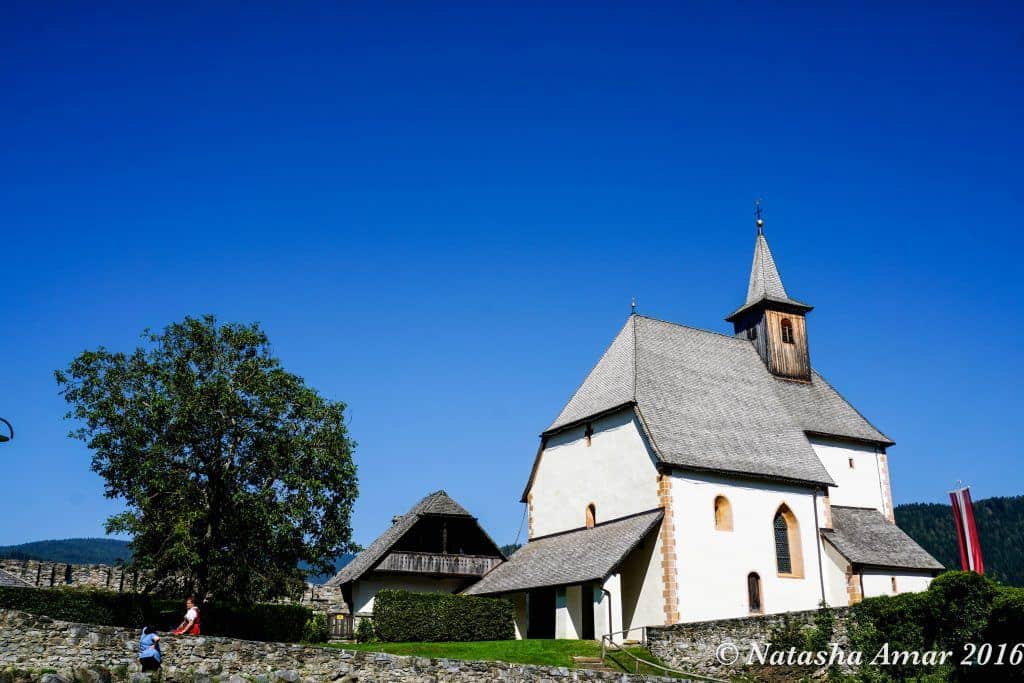 The strategic location offers a fantastic view over Friesach; orange-red roofs clustered around the impressive gray façade of the Church of Saint Bartholomew, surrounded by alpine hills. 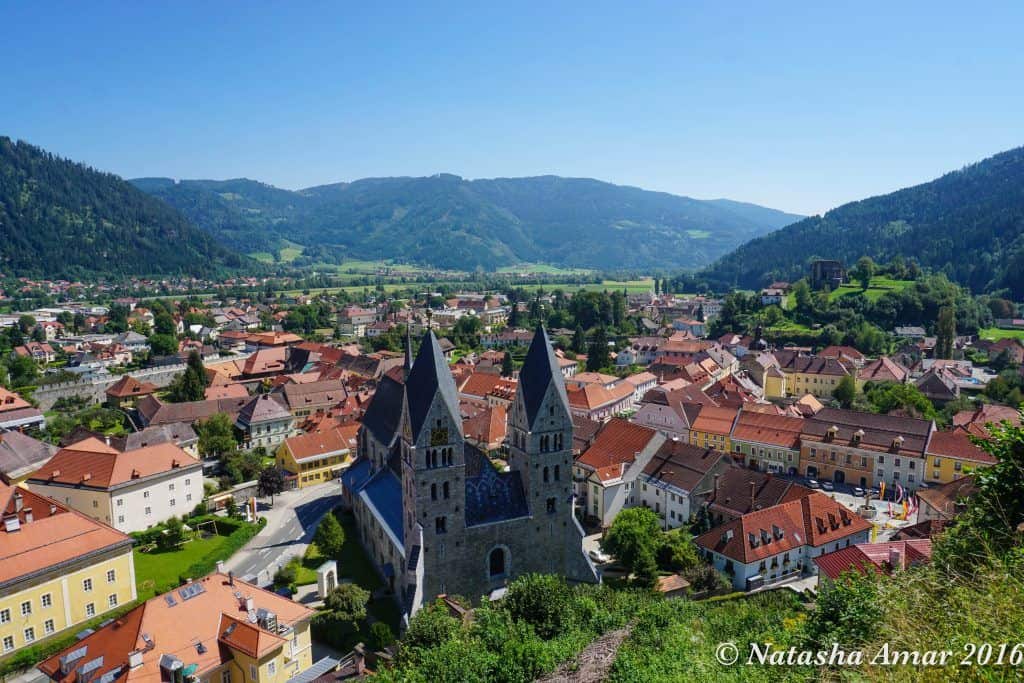 Tip: A visit to the castle is a fun family activity- you can have lunch at the restaurant with a fantastic view over town and spend the afternoon trying your hand at archery.

A Castle in the Making

If you’re as fascinated by medieval history as I am, then you’ll agree that the chance to see the construction of a castle using medieval methods is a truly unique experience. At Erlebnis Burgbau in Friesach, you can do exactly that at a construction site that has neither electricity nor modern tools and equipment and uses natural raw materials such as stone, sand, wood, limestone, and water.
Carpenters, stonemasons, blacksmiths, and other craftsmen, formally trained in their crafts, are hard at work to build a castle complex consisting of a residential house, walls, watchtowers, and a chapel using traditional techniques. The project is expected to be nearly completed after 30 years. The goals of the initiative are cultural preservation, to boost tourism and the economy of the town, and cooperate on research to gain a complete understanding of medieval construction methods. 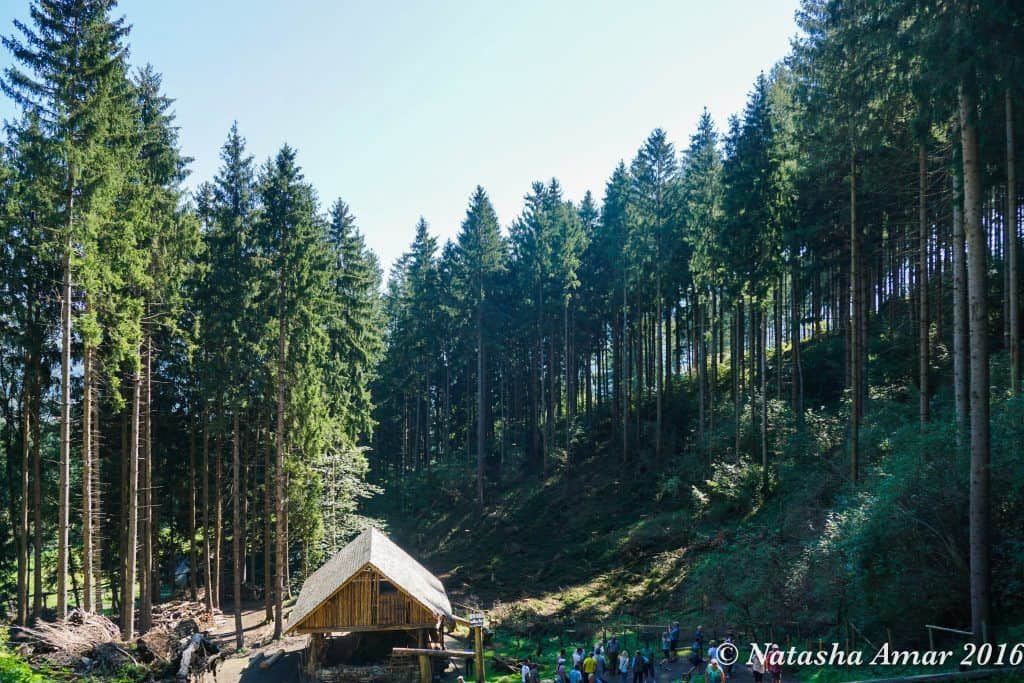 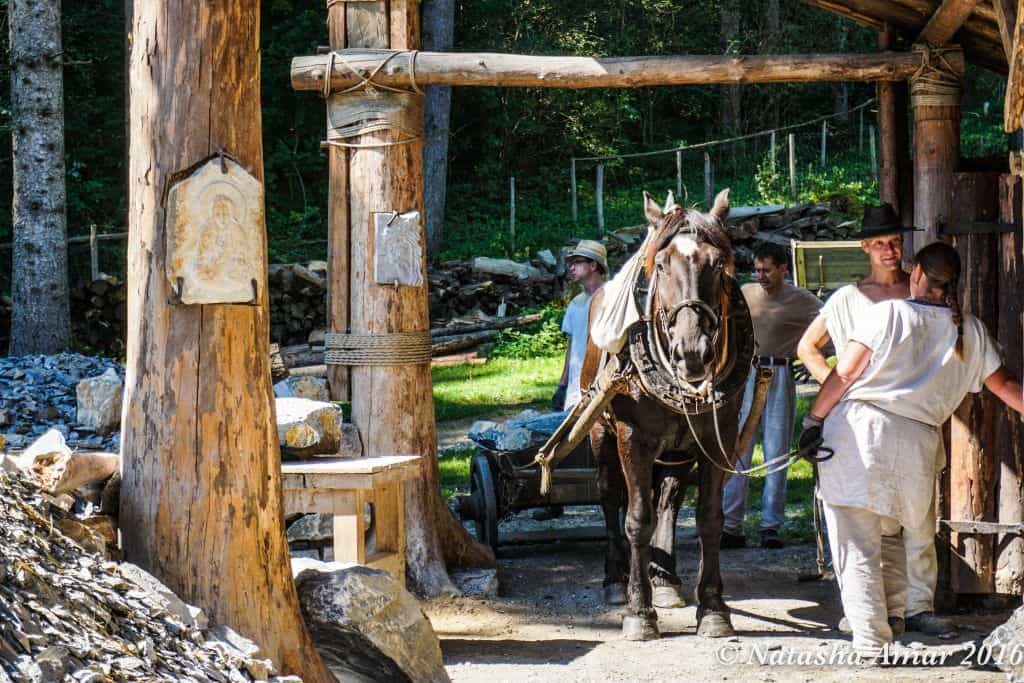 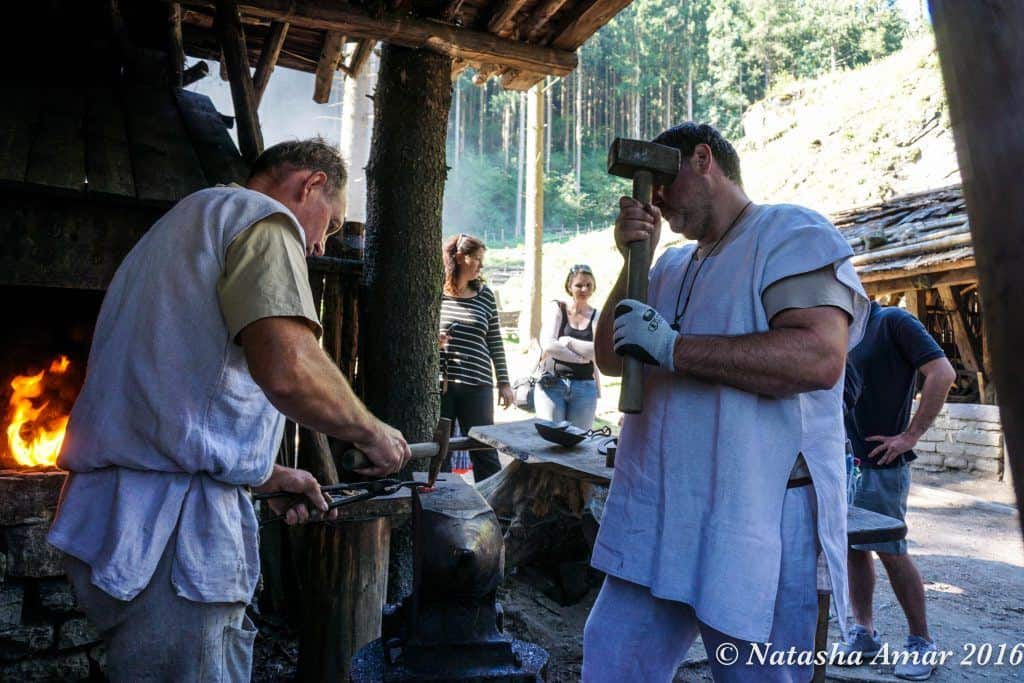 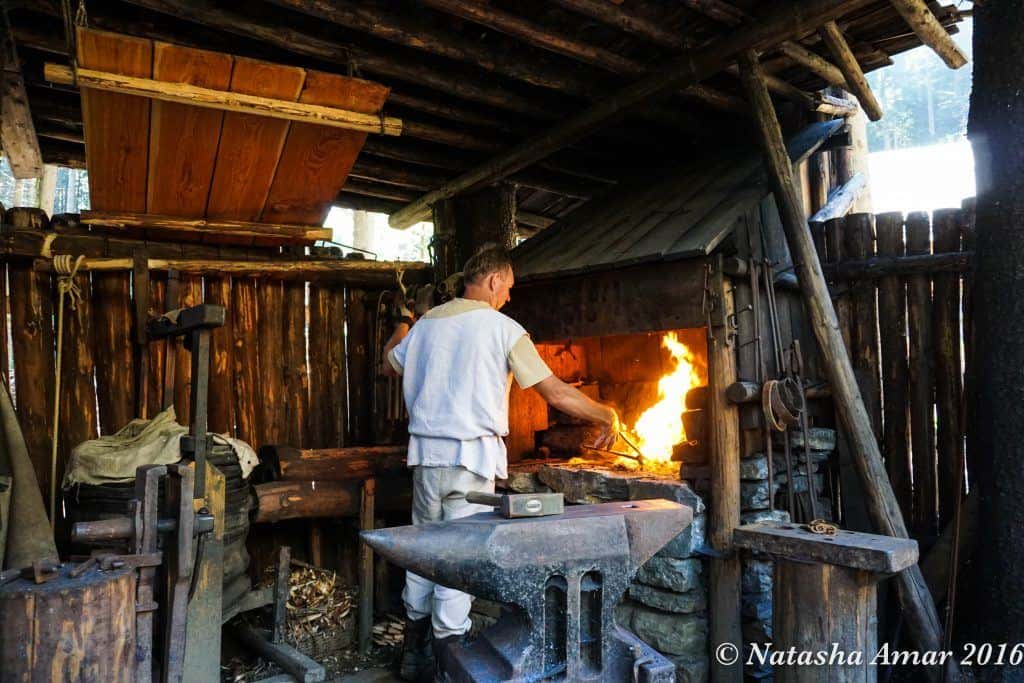 Tip: Every year in July, Friesach comes alive with the celebration of a week-long medieval festival called Spectaculum. With medieval knights, musicians, traders, jugglers, and fire-eaters, it’s like having walked into an episode of the Game of Thrones. It’s worth timing your visit to attend the festival. 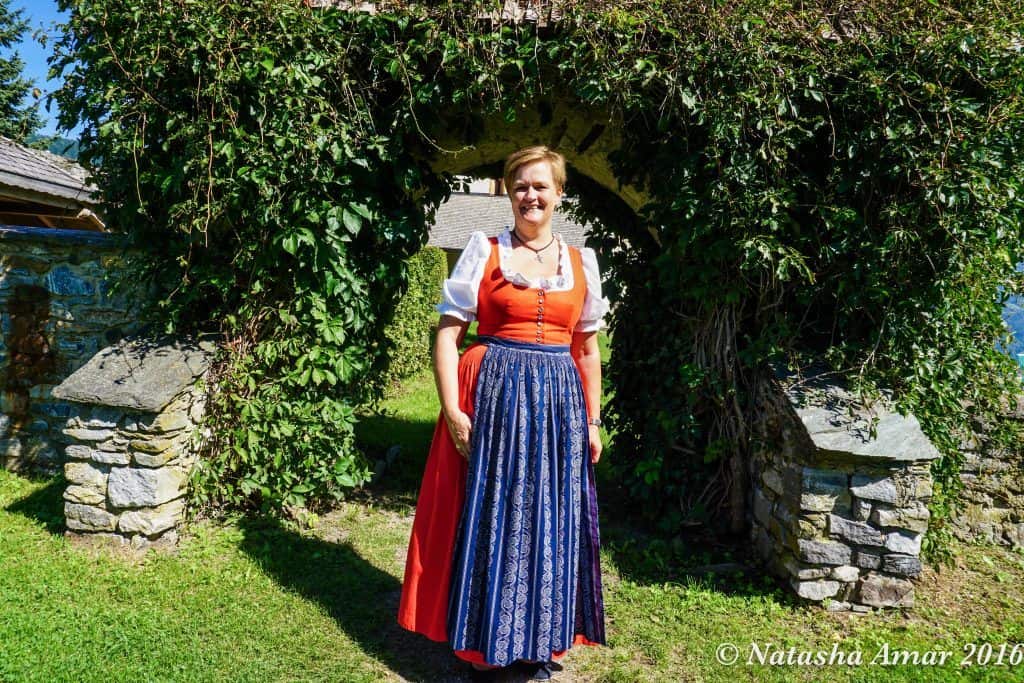 Our guide Astrid looks lovely in the traditional Drindl

Visiting Austria in winter? Here are things to do in Vienna in winter. You might also be interested in the best Christmas markets in Europe.

Note: This article is part of the Crossing Routes – Blogging Europe  2016 campaign, in the framework of the Joint-Programme between the Council of Europe and the European Commission aiming at promoting the Cultural Routes of the Council of Europe, in collaboration with iambassador.

I've been to Austria too and I've got nothing but amazing memories there! I dearly hope to be back there soon since it's always a great place to visit. :D Thanks for sharing your trip too, I'll be taking note of some things here.

What a great trip. I would love to visit. Looks gorgeous. I love history and would love to go and learn more about medieval times.

I can't believe I lived in the north of Italy and never heard of this route. It's a shame, because it looks absolutely gorgeous! You visited some really beautiful towns and villages, which are often my favorite places in Europe.

I had no idea about the TRANSROMANICA - though I like Romanesque art. I love Austria, and I discovered several interesting places to visit. The view from the Pyramidenkogel observation tower is truly spectacular - I'd love to enjoy it one day!

What a great trip! Love this cities, so full of history. Just loved to read about the construction of a medieval castle using the same ancient methods. We always visit castles but without really thinking about how they were built. This is a great opportunity.