The determined clunking of a punch hammer on stone greets visitors as they step through the gates into Erlebnis Burgbau, a sprawling site bordered by a spruce forest in the quiet Austrian town of Friesach that looks like the sets of Game of Thrones. Paying little attention to the group, a stonemason continues to work with his hammer and chisel with artistic precision. A few hundred meters away, a blacksmith lowers a piece of iron into a furnace. Just across from him, another blacksmith hammers to sculpt the hot metal into shape, ignoring the tiny drops of sweat that trickle down the side of his face.

Dressed in plain off-white tunics tied at the waist with a cord and matching trousers, the craftsmen look like they’ve stepped out of the pages of a medieval tale. Except that they’re not actors and nothing here is staged. In fact, these stonemasons, carpenters, blacksmiths, bricklayers, and mortar-makers are hard at work to build a 12th-century style castle using natural building materials such as lime, stone, wood, and water and methods that were used in the Medieval Ages.

Austria’s Carinthia region, of which Friesach is the oldest town, is home to over 300 medieval castles but not everything is known about the techniques that were employed in their construction. Erlebnis Burgbau was developed as an archaeological and historical experiment with social, cultural, scientific, and educational implications. The success of the project holds the keys to the many unknown realities of building a medieval fortress with only the resources available at the time. 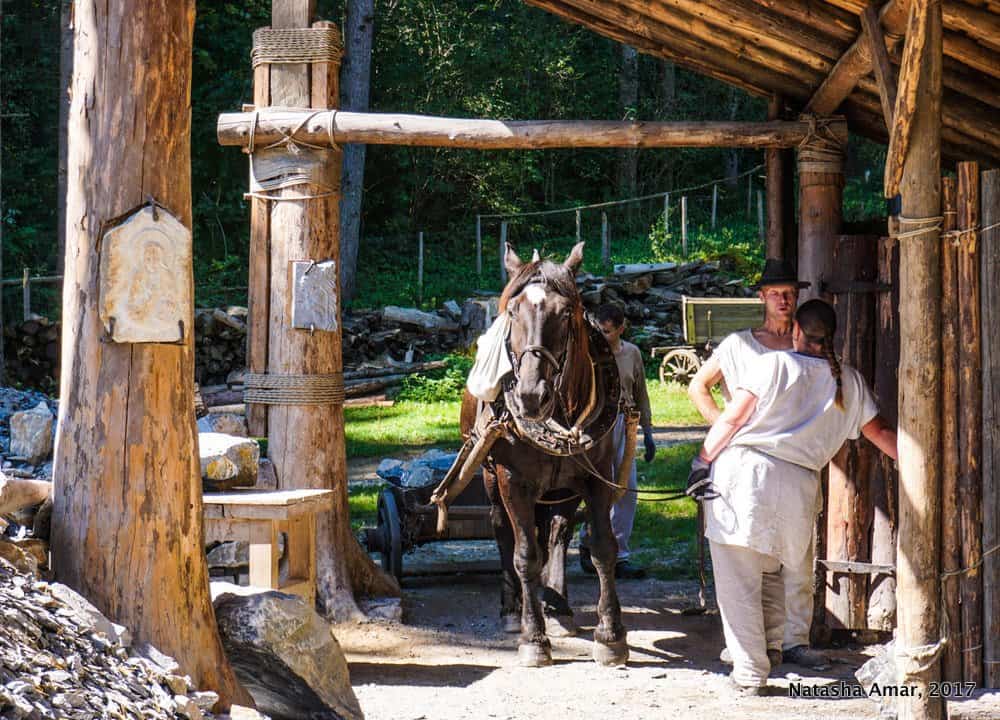 Tradesmen take a break to chat at Erlebnis Burgbau 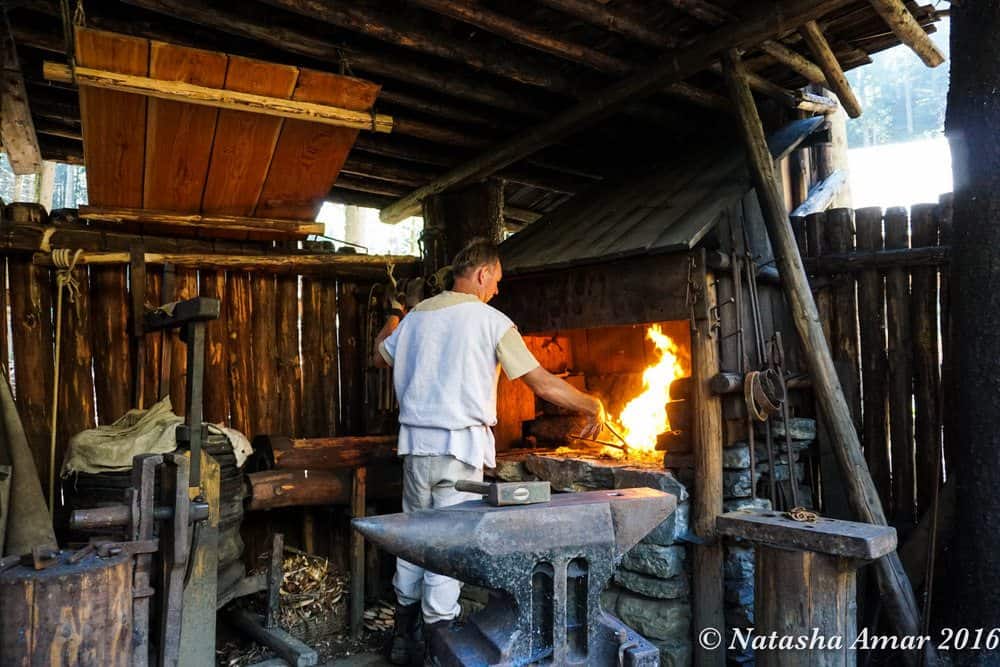 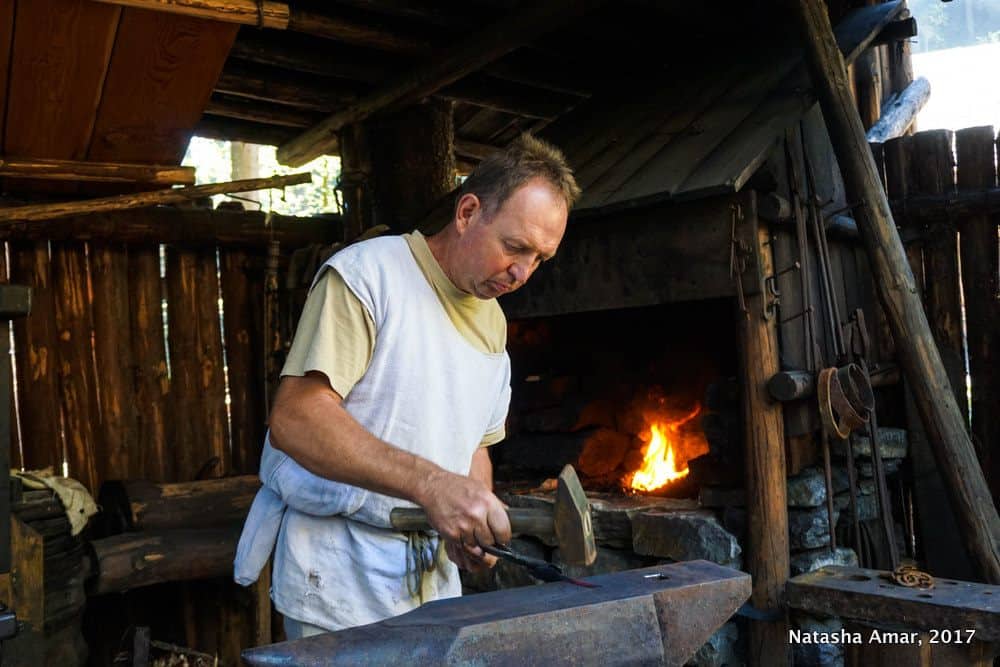 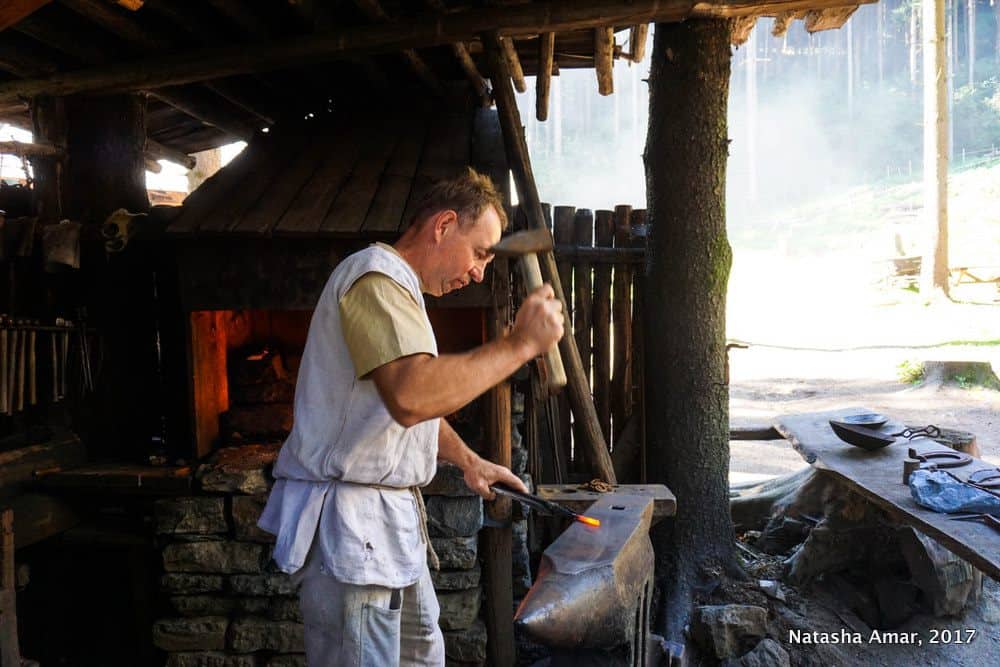 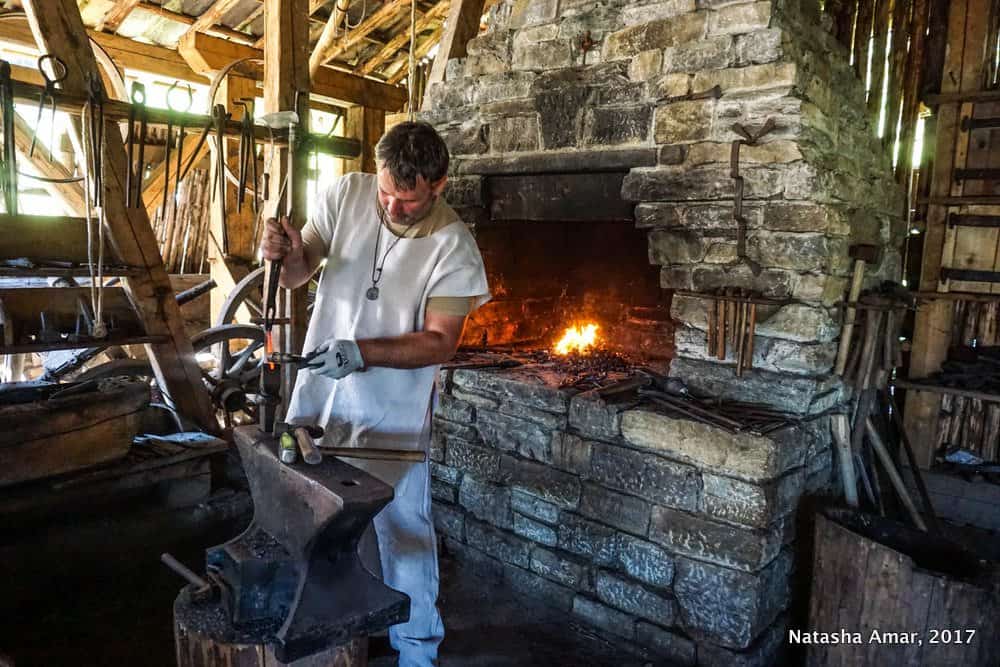 The plan is to use man and animal power to build a Romanesque residential tower, residential building with a Gothic chapel, business building, courtyard, garden, protective wall and gate, atypical of medieval fortresses in Carinthia. With 40 full time staff who work from April to October from 9am to 6pm, five days a week, the project is also credited with creating meaningful employment opportunities. No electricity or modern technology is used in the construction process. Five horses transport the building materials around the site in wagons. The carpenters onsite build all the cranes and scaffoldings used by hand. 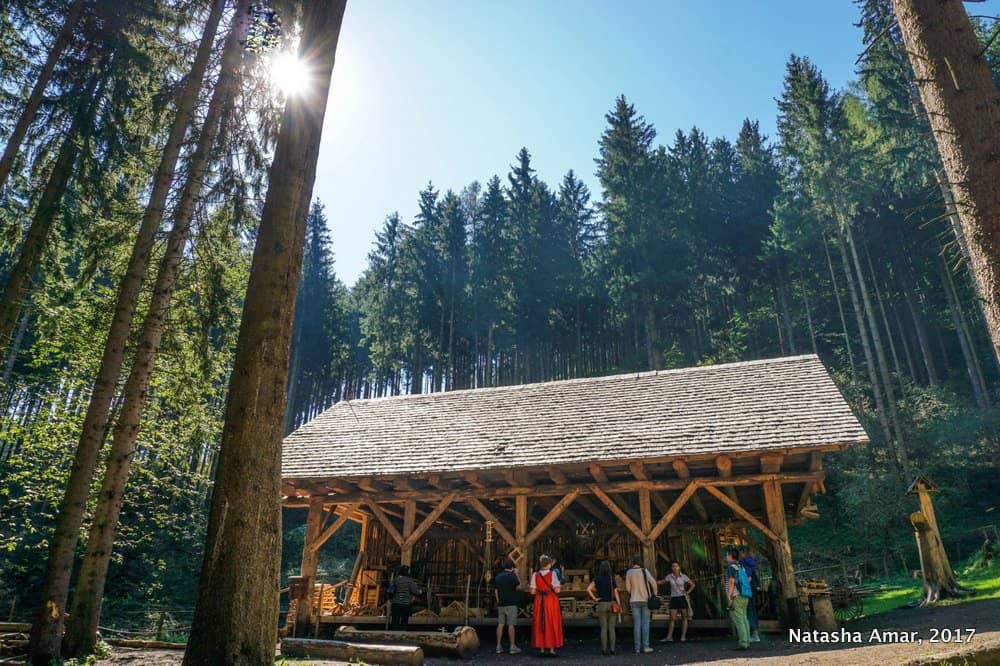 The location of the site is spectacular 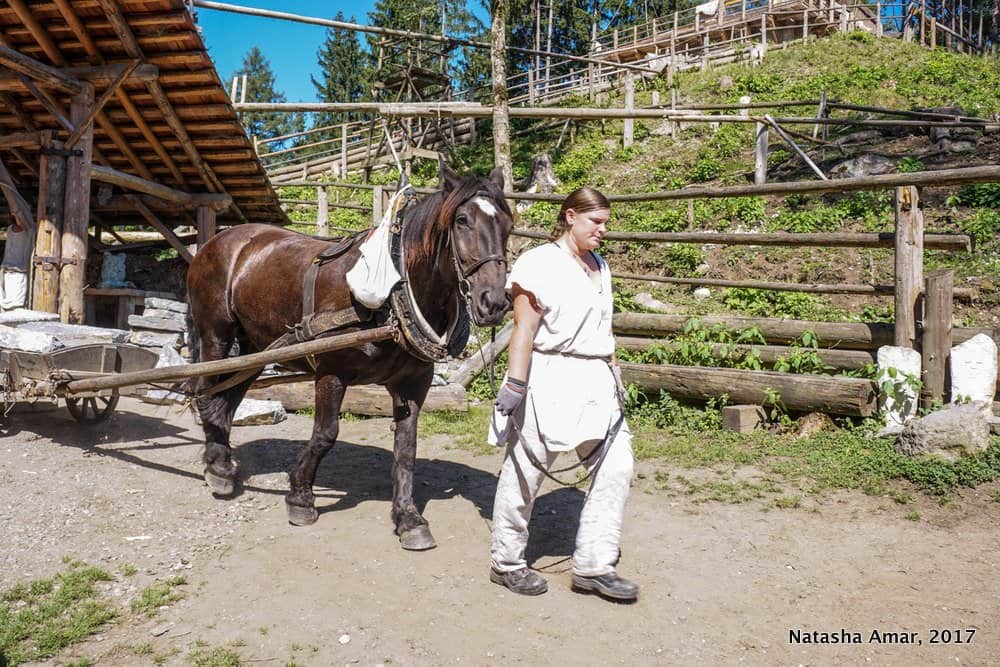 Horses are used to transport materials and tools 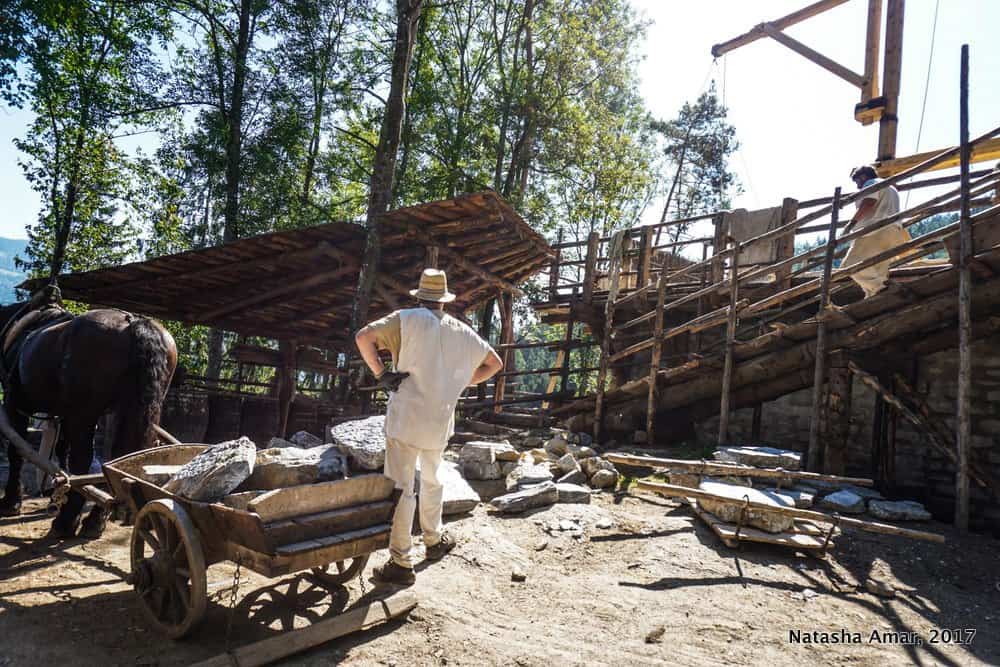 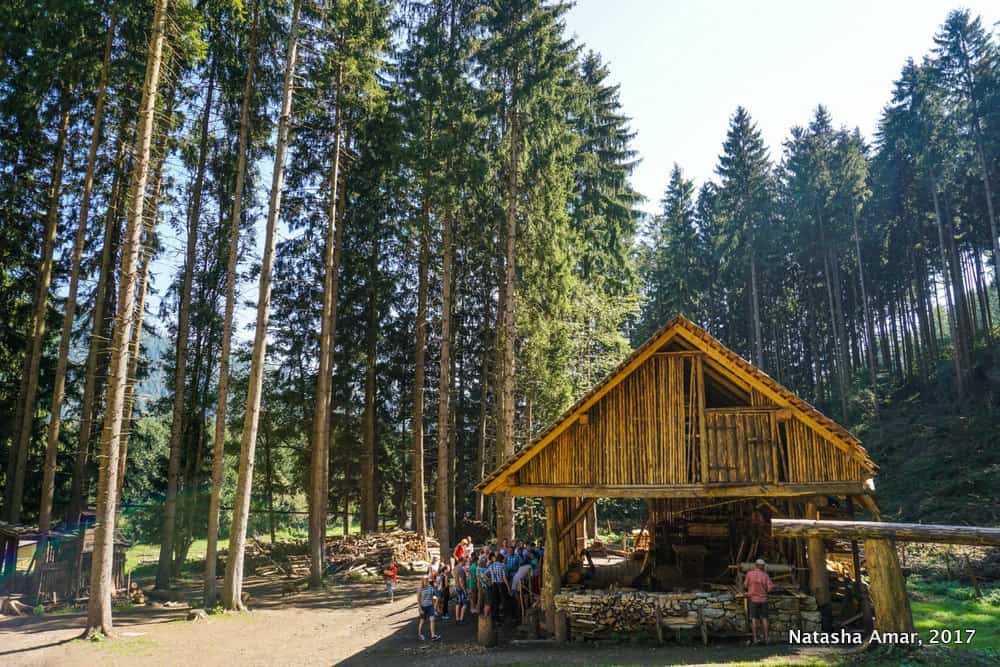 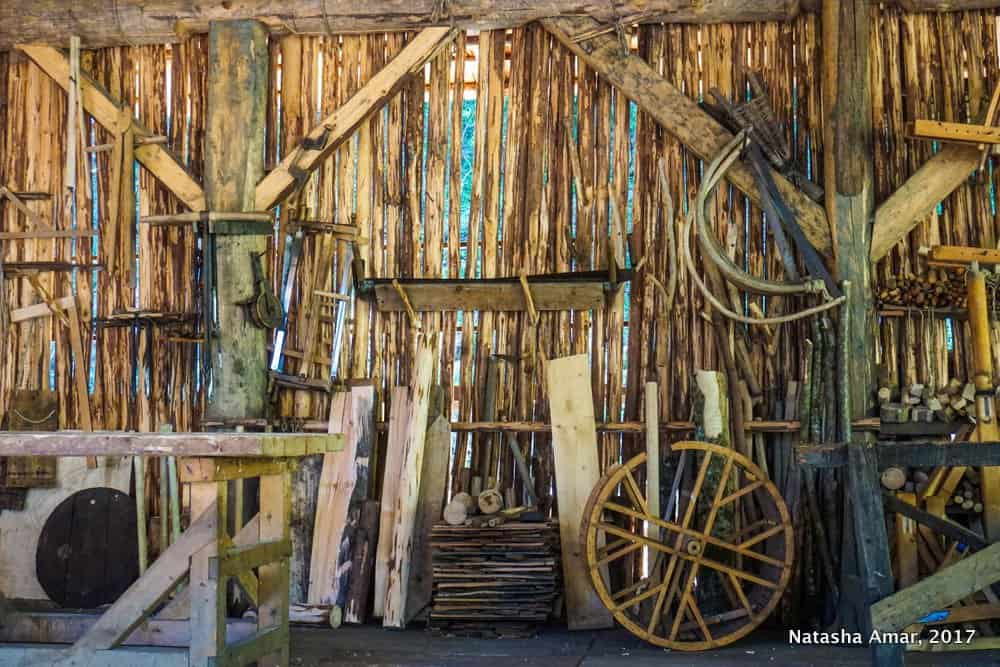 It is believed that the project would help broaden the knowledge base about the construction techniques of medieval castles and revive traditional crafts and trades that are in danger of being lost due to modern methods. The tradesmen who work here have had formal training in their crafts for a period spanning several years, just as they would have in medieval times. The project is thought to have considerable potential to contribute to the economy of Friesach as more curious tourists turn up to see the progress in the construction. But many come in the mistaken belief that this is one big show complete with costumes and make-believe activities. 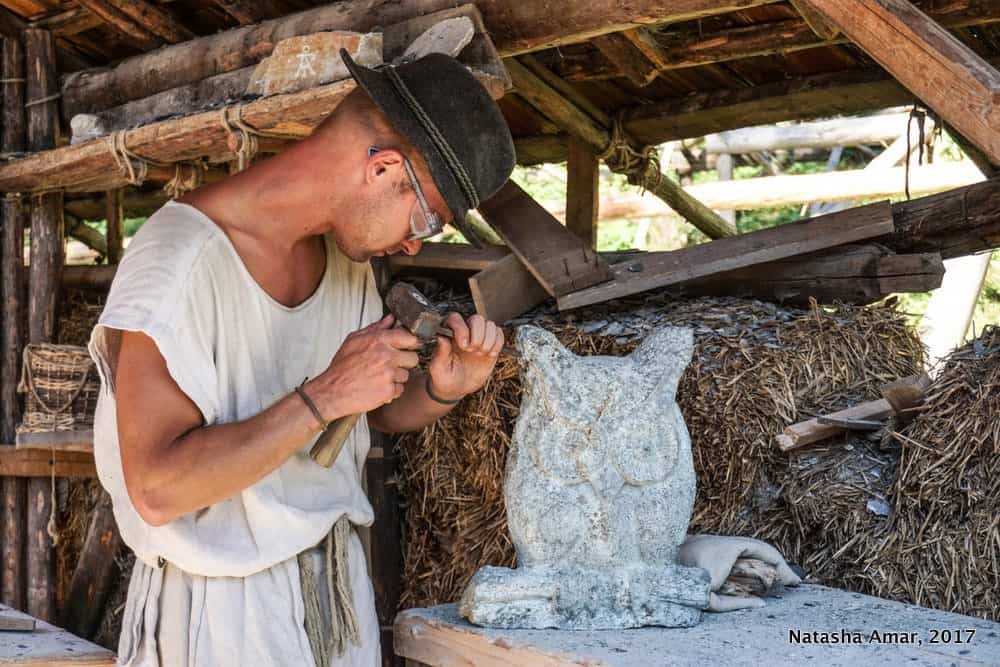 Of course, manual labor means that the expected timeline for completion needs to be realistic; in this case, just eight of the project’s 40 years have been completed. This seems to offer perspective to visitors who after spending some time here, leave with a new appreciation for the work that went into building medieval castles. A tour of the site at Burgbau Friesach is a fascinating revelation and so, one of the most unique places to visit in Austria.

While tourist interest in the site is growing, much remains to be achieved in terms of enjoying the kind of popularity that would make the project sustainable. After all, working without electricity and modern methods has its own challenges and the tradesmen at Erlebnis Burgbau face many work hazards just like their medieval counterparts did. Only time will tell if the project will result in adding yet another magnificent example to famous castles in Austria; there are at least another 32 years to go. 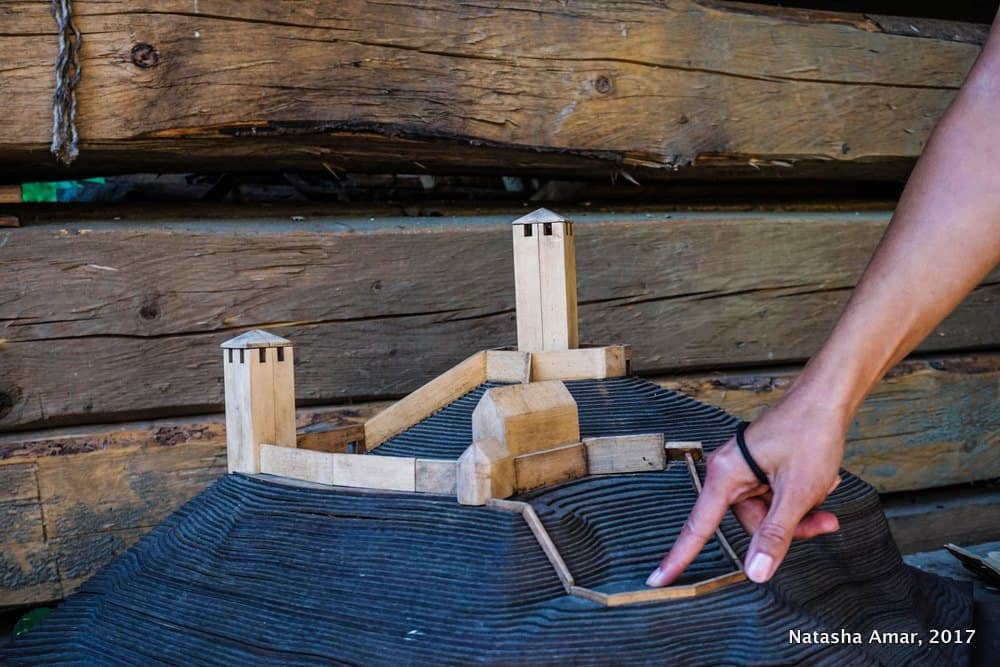 A model of the completed fortress 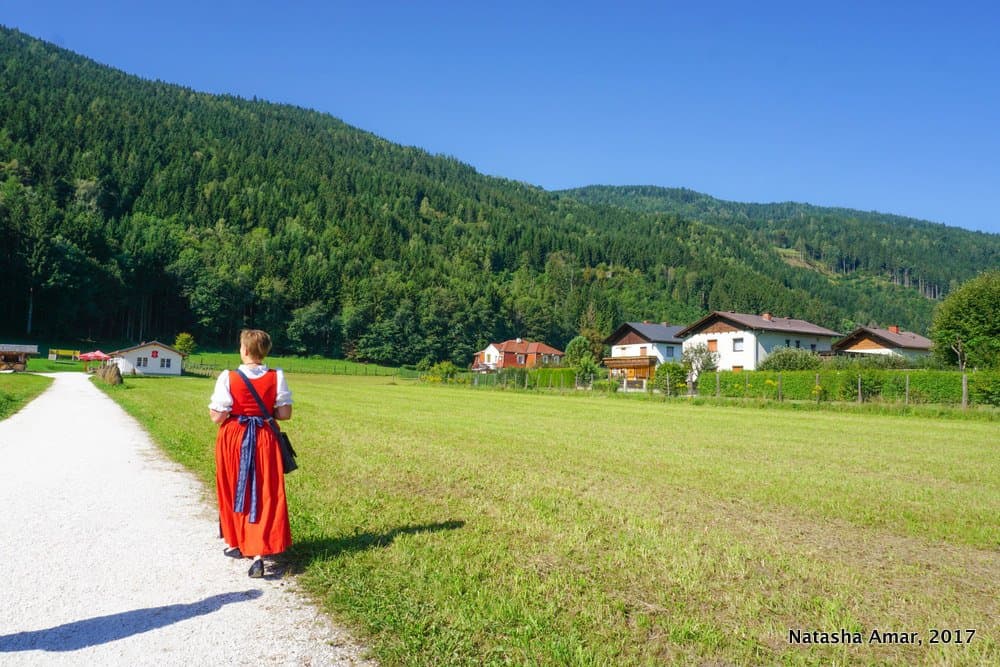 Our guide Astrid in a traditional drindl 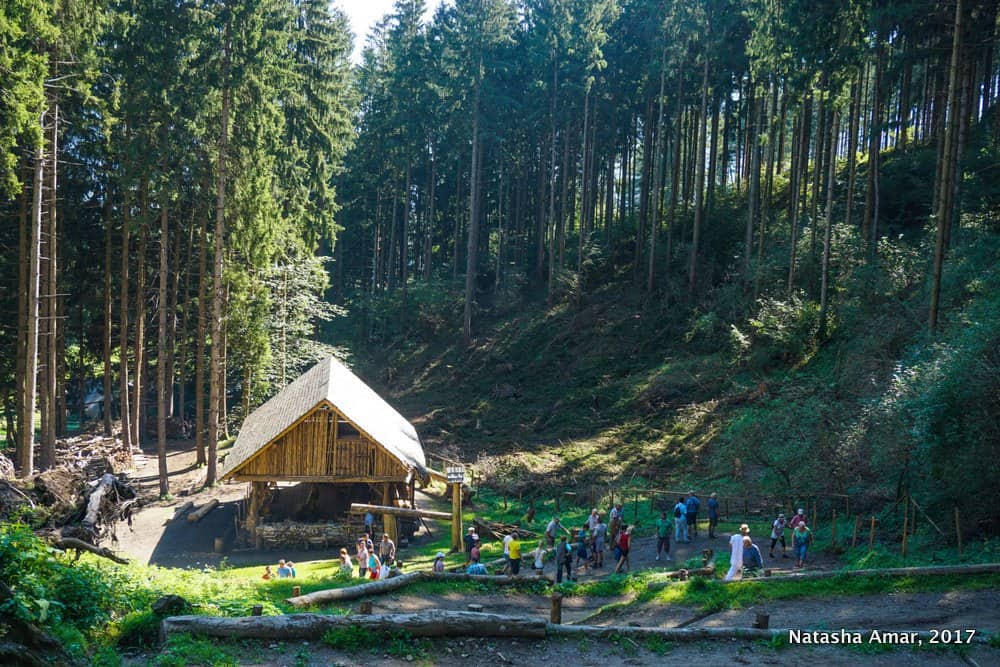 Tip: Only guided tours of the construction site at Erlebnis Burgbau are available 7 days a week in summer.

Hey Natasha, thanks for sharing this post with us.

It looks amazing what this guys are doing, and it really takes a lot of patience and skill to do it.

They will probably have to work all their lives at this project...

This is so cool. I have such a big obsession with castles! I'd love to go see this! Too bad they're only 8 years into it though. And 40 years total -- holy moly! So awesome though! I love it! <3

Oh wow, that looks amazing. I've old heard of the one in France, Guédelon Castle, but this one seems fascinating as well. Beautiful pics! Thanks so much :)

thank you for reading!