Sri Lanka, an island paradise of palm-fringed beaches, crystal clear waters, delicious food bursting with myriad flavors, lush tea plantations, gorgeous hiking trails, and some of the friendliest people in the world, remains one of my most favorite Asian destinations since I first visited in 2012. This week, we have a guest post on the festivals of Sri Lanka by Lily Evans.

The festivals of Sri Lanka, one of the most beautiful islands on the planet, are unique even from others celebrated in the rest of South Asia. Think one-of-a-kind music and dancing, enthusiastic locals, and colorful celebratory processions unlike anywhere else in the world. A great many of these are Hindu and Buddhist religious occasions. The main festivals are scheduled on the basis of the lunar calendar, this means that many are held on full moon nights. This fact affects the dates of the festivals making them vary annually.

Get your Sri Lanka visa online.

Traveling to Sri Lanka during one of its festivals offers tourists the rare opportunity to experience a culture that is diverse and essentially shapes the identity of this magnificent island. Here are some important festivals in Sri Lanka: 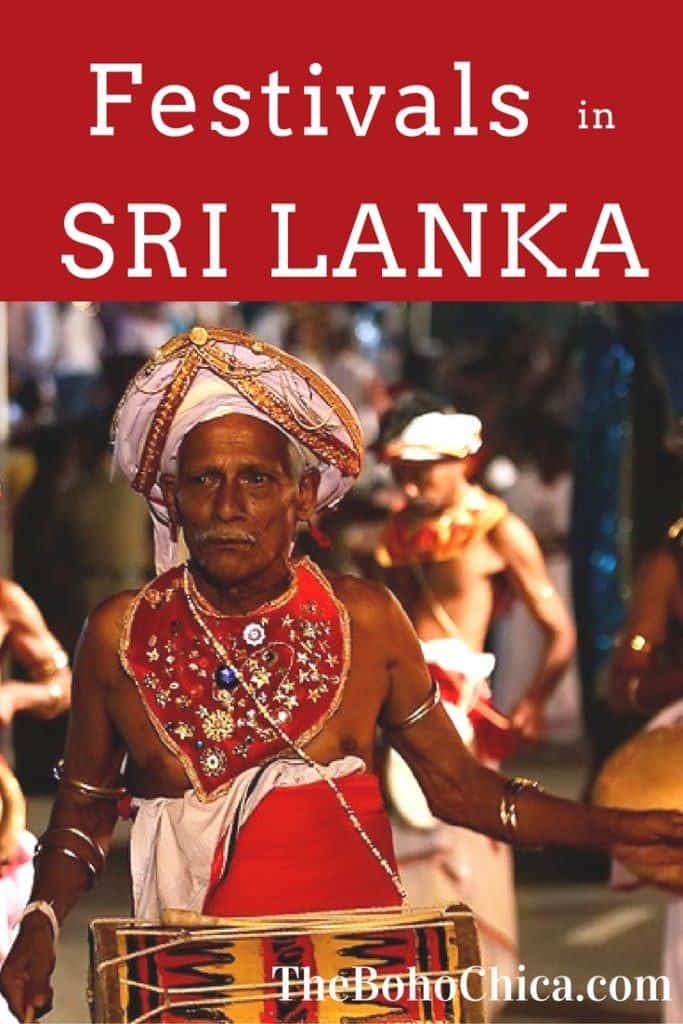 In September, Ratnapura glows with life and light with a procession known as the Esala Perahera. The main procession in the festival is the Maha Perahera. It is characterized by a buildup of several rituals that last a couple of days prior to the grand finale. Monks rhythmically chant benedictory verses in the first rite followed by a ritual called Kap Situveema. The temple’s priest who rides on an elephant and carries sacred jewelry accompanies office bearers and dancers. 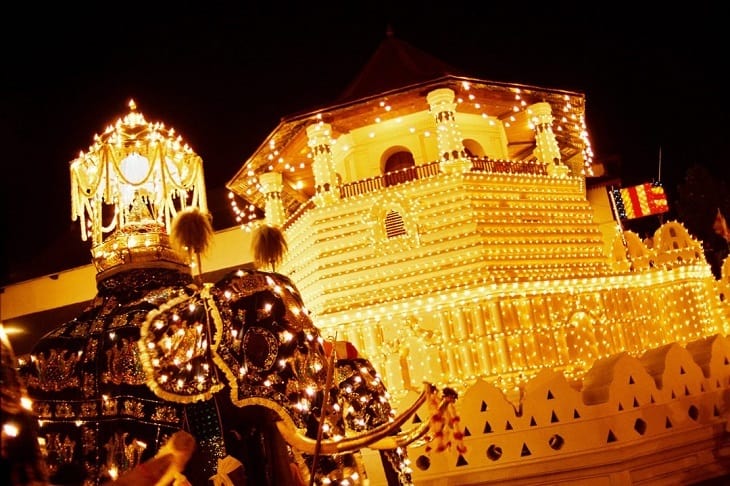 Observed by the Muslim population residing in the country and in the rest of the world, the festival kicks off at 6 AM with a sermon in a mosque that is situated just within the neighborhood. This is closely followed by visiting relatives and the sharing of food. The festival is generally characterized by generosity so as to facilitate the spreading of blessings and joy. Friends get invited to partake platters of finger licking delicacies and the same gets delivered to both colleagues and neighbors. As a gesture of community goodwill and charity, meals, gifts, and money are donated to the poor so they may join in the celebrations.

This festival marks the first of three visits the Buddha made to Sri Lanka. It is celebrated with a spectacular parade called parahera in Colombo’s Kelaniya suburb, specifically at the Raja Maha Vihara. At the time of the festival, all businesses remain closed and those who follow Buddhist teachings engage themselves in meritorious deeds and deep meditation. The festival essentially marks Sri Lanka’s initiation to the teachings of Buddhism. All worldly pursuits are at a pause and only spiritual ones take place in keeping with traditions. It marks the start of a 3-month pilgrimage that heads to Adam’s Peak.

A Hindu festival that serves to honor Surya, the sun god, the cow and Indra the bringer of rains. It is characterized by ceremonies inside the Hindu temples. This is followed by the cooking of the new paddy harvest in a special pot. The direction in which the liquid from the cooking pot spills is an indication of luck in the year that follows. 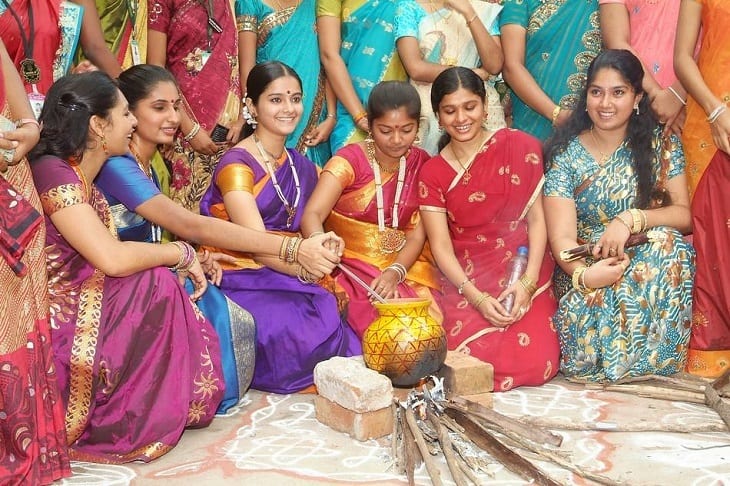 This festival commemorates the announcement of the Buddha’s impending death at the age of 80. It is marked by a large parahera in Colombo at the Gangaramaya temple. The Gangaramaya Vihara that is located in the middle of Colombo is a favorite tourist attraction. It can be conveniently viewed from the roadside stands along the route of the procession. It is undoubtedly among the largest festivals on the island as it features a 50-elephant procession. This festival features drumming, dancing, plate throwing, stilt walking, whip cracking, a Rolls Royce being towed and even acrobatics. 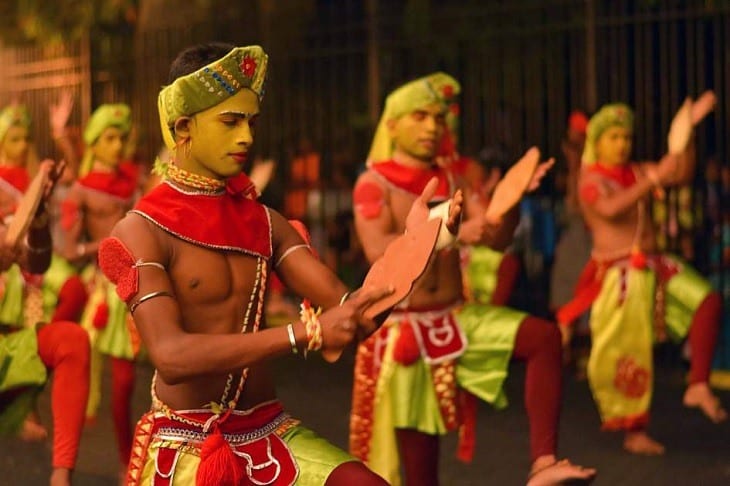 This festival coincides with the onset of the southwest monsoon as well as the conclusion of the harvest season. The Hindu and Buddhist New Year is meant to be a family festival centered around the exchange of presents and the preparation of the traditional kiribath meal i.e. rice that is cooked using milk and then cut into diamond shapes. Businesses usually remain closed, new clothes are worn, horoscopes are cast and rituals are performed at this time of the year.

It is the most critical of the Buddhist poyas as it commemorates the Buddha’s birth, his enlightenment and consequently his death. Lamps are usually lit in front of homes and pandals are put up across the country. Pandals are temporary sets depicting scenes that portray the life of the Buddha. Cars and buses are decorated with streamers and free food consisting of curry and rice is distributed from roadside boots called dansal. Buddhists visit temples, engage in deep meditation and even fasting at this time.

The festival celebrates the first sermon of the Buddha as well as the arrival of the Tooth Relic. Esala is the lunar month that is filled with festivals, an important one of which is Esala Perahera, held in Kandy. Similarly, there are festivals at Bellanwila, Kataragama and Dondra. Not to forget a 7-day celebration held at Unawatuna where people descend on the beach and village in thousands.

The Hindu festival of lights commemorates Rama’s return from exile in the Hindu mythology of the Ramayana. It is marked by lights being lit in Tamil households as a symbolic gesture of good triumphing over evil. New clothes, gifts and visiting friends and relatives are a part of the celebrations. Fireworks and lamps are lit. It is normally celebrated in October or November.

Diyabubula: Stay in a Glass-Roofed Villa at this Eco Lodge in Sri Lanka

9 Things to do in South Sri Lanka

Sri Lanka Safari: Into the wild at Yala National Park

What to do in Nuwara Eliya in the Hill Country

Wandering the Streets of Galle

Lily is the founder of SkyWeFly, a blog featuring photographs, stories and travel tips that will help you make a great journey. She hopes to bring her passion to more people via SkyWeFly.

Get your Sri Lanka visa online.

Have you ever visited Sri Lanka? Did you get to see a festival? How was your experience traveling in the country?

I love every festival of my country because for me its a high time to eat everything which I want to eat :) Apart from food the best part of Sri Lankan festivals which I personally like is meeting with my all family members and sharing some quality time with them.

Food is definitely one of the highlights! My husband and I loved the food in SriLanka so much, we are hoping for a second trip where we eat our way around the country!

I think a festival is one of the best ways to get to know a country :) Last year I celebrated new year in Vietnam and Thailand, it was awesome! x

I agree! One of the best times to be in a new place is a festival, specially if it involves parades, music and dancing!