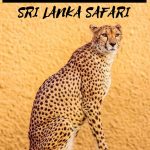 The excited chatter in the bus dropped to a silence interspersed by the sound of camera shutters, as those of us standing in the front gaped in awe at the majestic creature that stood before us, illuminated in the dark forest outside the windshield, only by the headlights of the bus. Then, it began to walk in our direction confidently, its massive gray trunk swaying from side to side.

A lump formed in my throat and I lowered my phone camera. Surely, it would stop or turn around and disappear back into the thicket of trees by the road?

Our driver wasn’t waiting to find out; he promptly switched off the lights, and drove at an angle heading towards the other end of the road as the elephant watched us get away with large, observant eyes.

We were on safari in Yala National Park in Sri Lanka and these were exactly the kind of experiences I’d come seeking on my second trip to Sri Lanka. (Don’t forget to watch the video in this post).

Whether you’ve never been on safari or like me, simply love the idea of seeing the world’s most wild and beautiful animals in their natural habitats, then a Sri Lanka safari should be on your bucketlist (plus it’s so affordable). Considering how well developed facilities are for tourists, it isn’t surprising that wildlife tours are one of the biggest draws of tourism in Sri Lanka.

Thanks to its unique island ecosystem, not only is the country blessed with incredible and diverse landscapes, but also Sri Lanka’s national parks are home to abundant plant, animal and birdlife. On safari in Sri Lanka, you can expect to see leopards, elephants, water buffaloes, crocodiles, wild boars and diverse species of birds. If you’re lucky, you can also spot the blue whale, the world’s biggest mammal, on whale-watching tours in the country- another one of the world’s unique experiences that Sri Lankan tourism offers. 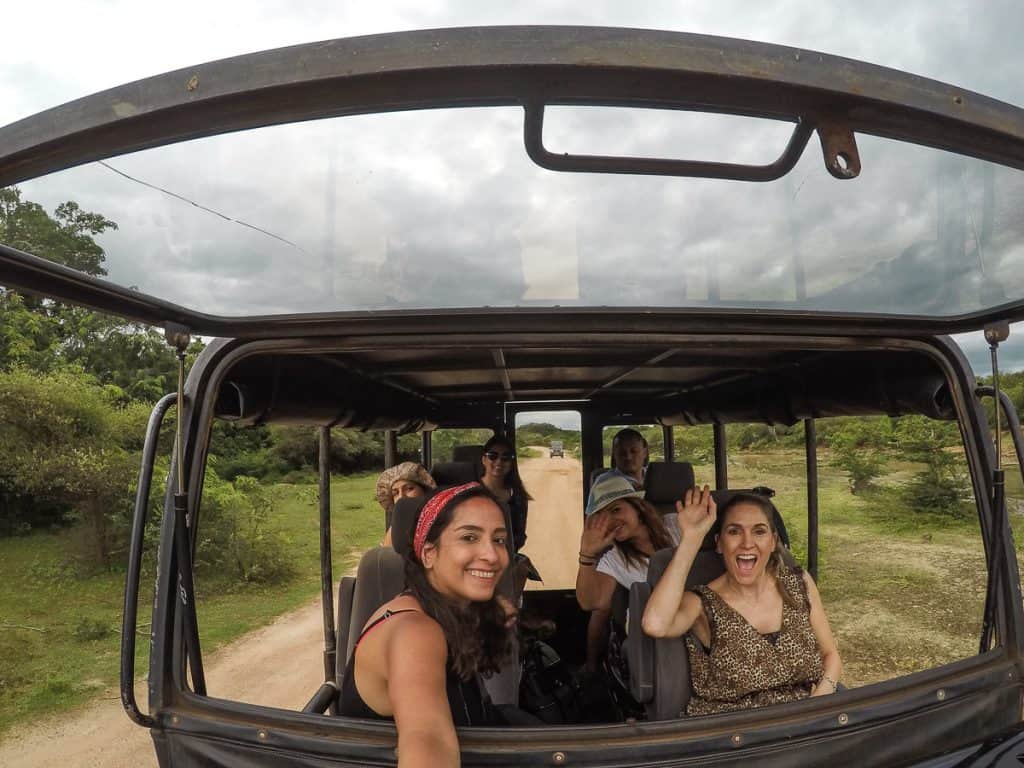 Safari ready with this fun crew 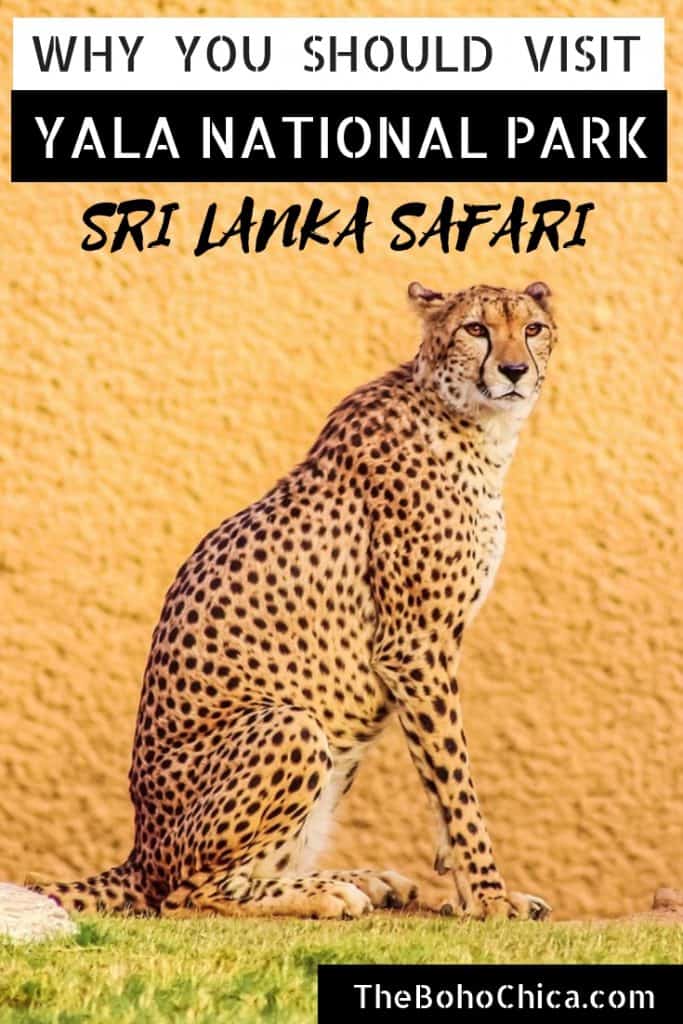 Spread over 130,000 hectares, Yala National Park in south eastern Sri Lanka, with its forests, grasslands, lagoons, dry scrubs and dramatic coastline along the Indian Ocean, was declared a national park in 1938. Home to over 210 species of birds, not only is it paradise for birdwatchers, but with resident elephants, sambal, jackals, spotted deer, peacocks, crocodiles, sloth bears, mongooses, wild pigs, and leopards, it’s also a must visit for wildlife lovers. 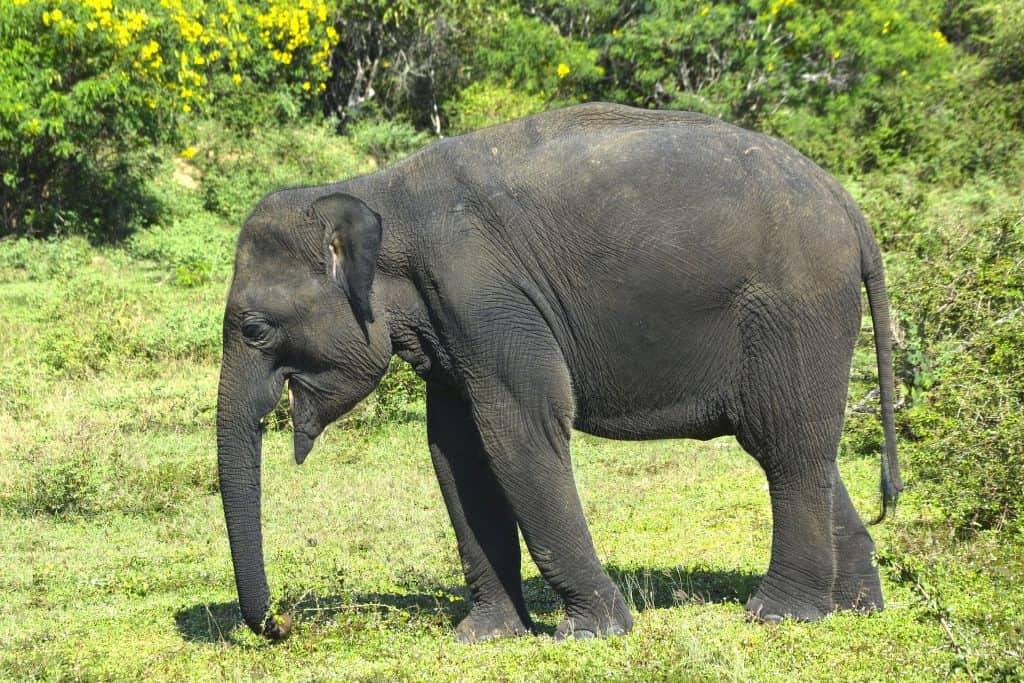 Yala National Park is also home to the ancient rock temple of Sithulpawwa, that was an important pilgrimage center over 2000 years ago and is believed to have once been home to 12,000 monks, suggesting that this now wild terrain was once home to a civilization.

Traveling to Sri Lanka? Apply online for your e-visa.

What To Expect on a Yala National Park Safari

In fact, while our jeep didn’t spot any elephants inside Lunugamvehera National Park, we did see them on our way there and back, just casually hanging around by the side of the road!

It took us an entire day to experience a Yala National Park Safari, and the safari jeeps were spacious and comfortable. Our guide Vidu was friendly and knowledgeable, pointing out the different species of birds we spotted such as the Kingfisher, Grey Heron, Spoonbill, Pelican, and Green Bee-eater, among others. We also saw several peacocks, spotted deer, crocodiles, water buffaloes, langurs, squirrels, mongooses and sambal. 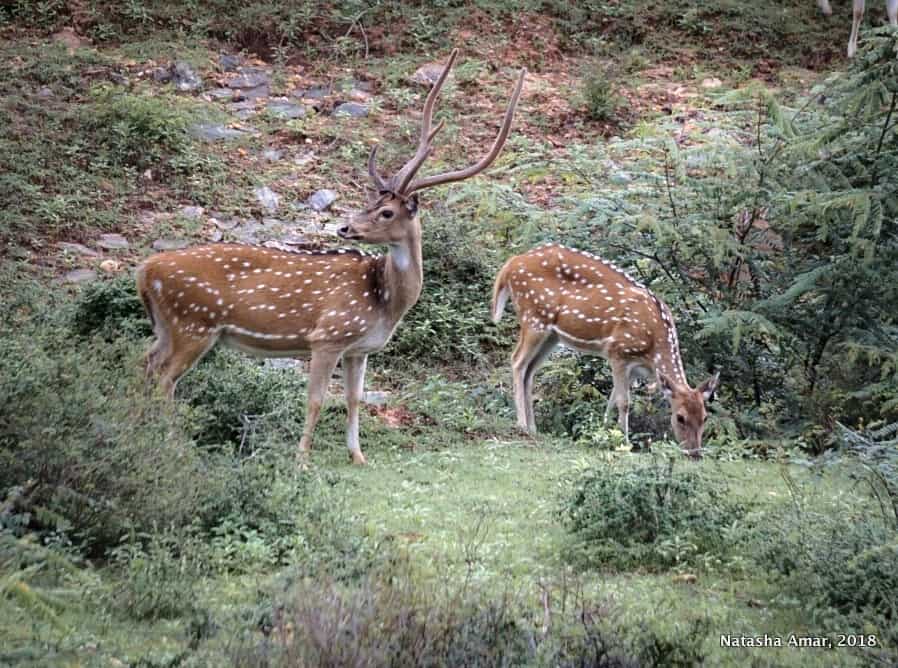 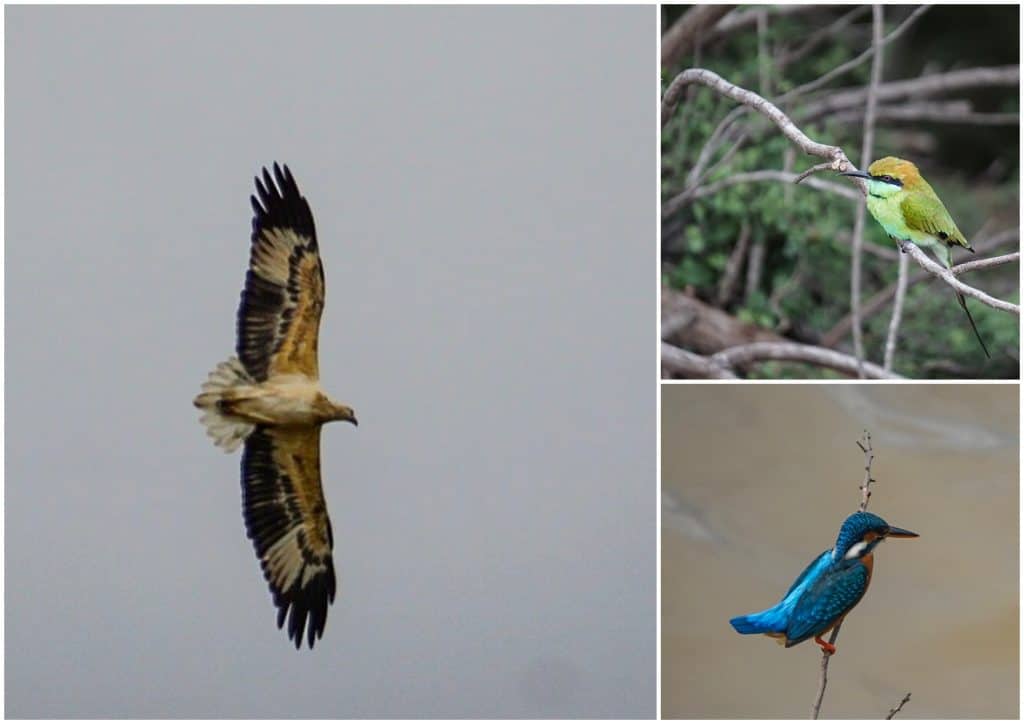 The area is a paradise for birdwatching. 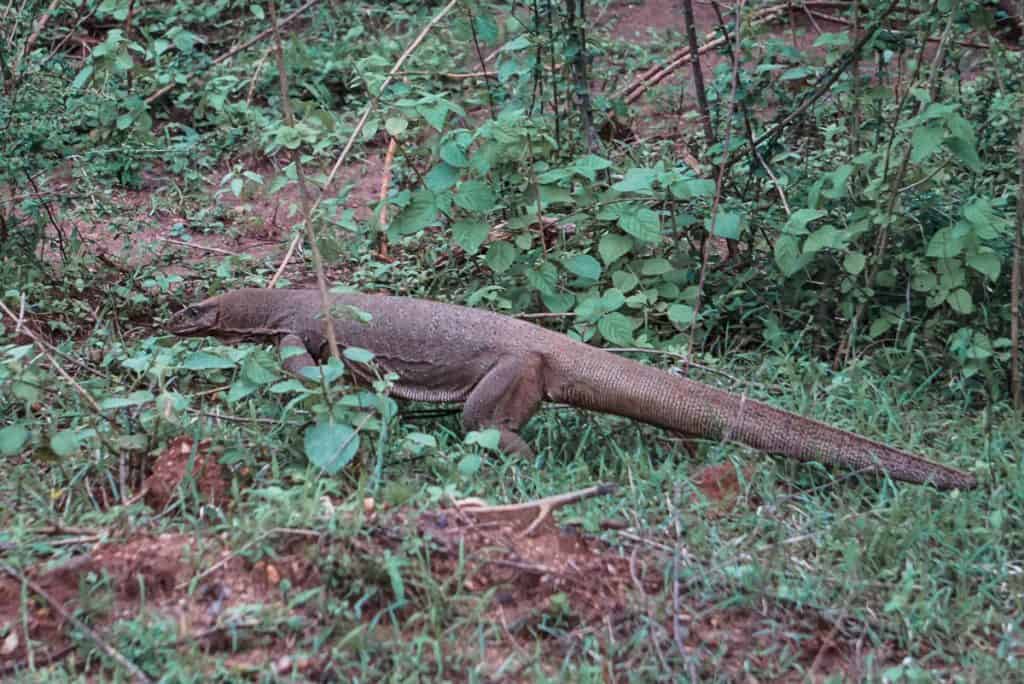 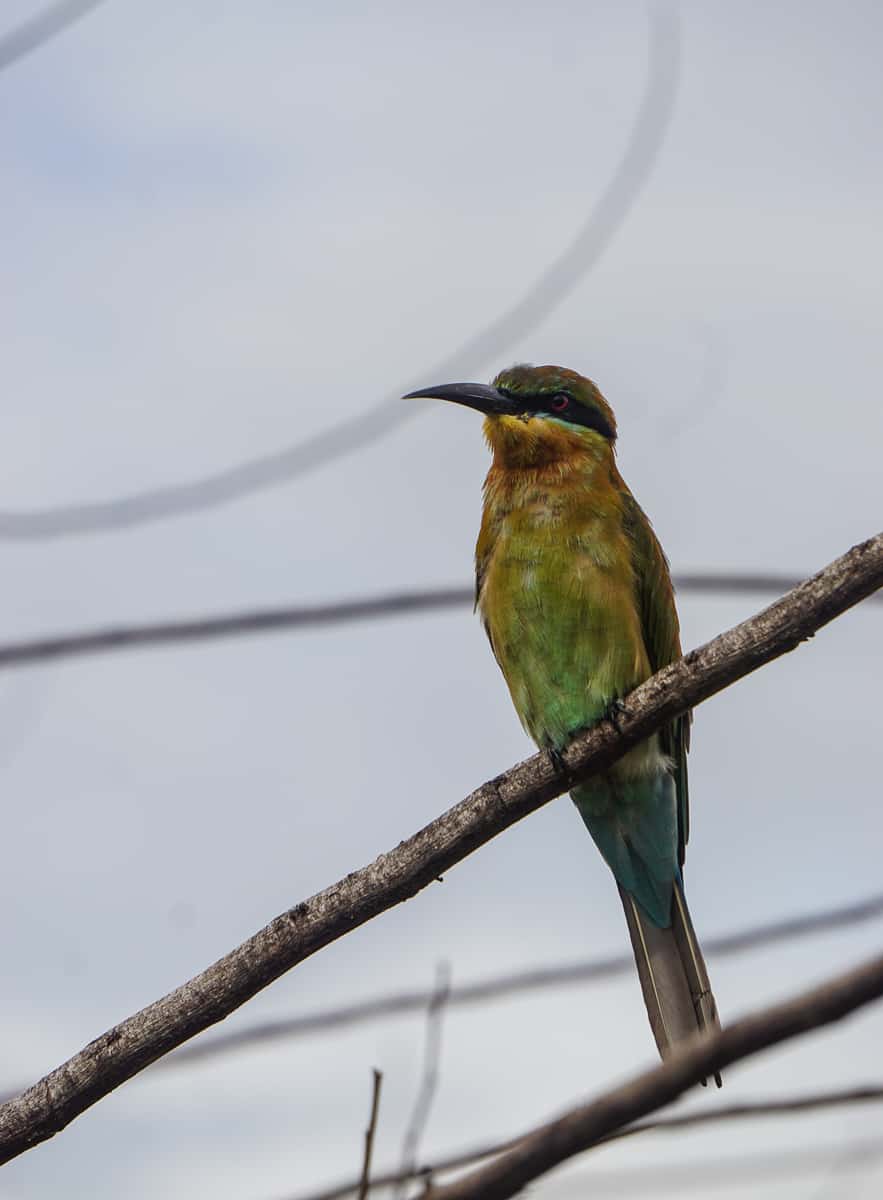 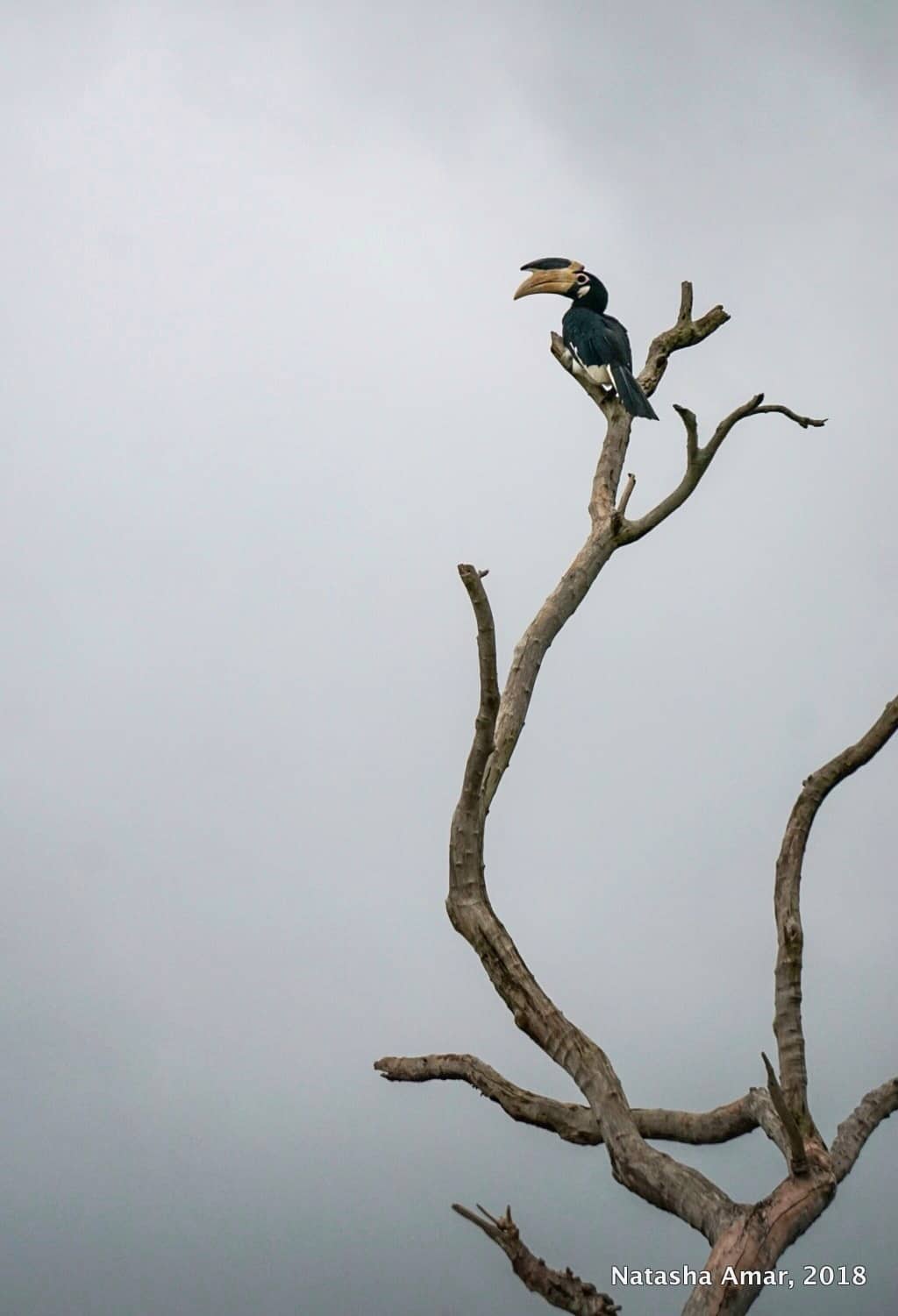 While it wasn’t overly crowded during our visit, you can expect many other safari jeeps during the peak season from June to September. Yala National Park remains the top spot for leopard sightings in Sri Lanka and is the most visited national park in the country.

Is this the best safari in Sri Lanka? 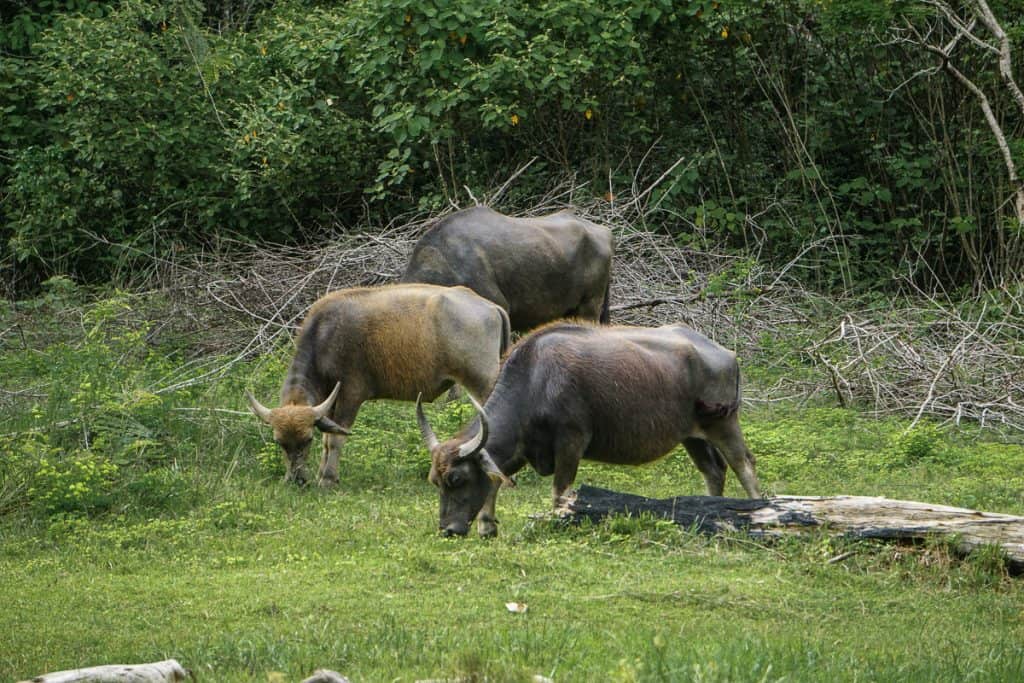 Where To Stay For a Yala National Park Safari

On this trip with Cinnamon Hotels & Resorts, I had the chance to stay at Cinnamon Wild Yala, a rustic but luxurious safari lodge bordering the Yala National Park, that was perhaps my favorite of all the Cinnamon hotels I stayed at. The hotel also arranged our safari experience.

The spacious and luxurious villa-style rooms stand around the property that blends in perfectly with the neighboring national park. Peacocks, langurs, elephants, buffaloes, deer, mongooses, and perhaps even leopards roam freely around the area, especially after dark or very early in the morning.

Guests aren’t permitted to saunter off on their own after dark- they must request an escort every time they want to go from their room to the reception or one of the restaurants.

I have to admit- following around a flashlight-yielding security guard in pitch darkness with nothing but the sounds of the forest, just adds to the awe-inspiring factor, especially if this is your first Asian safari experience. 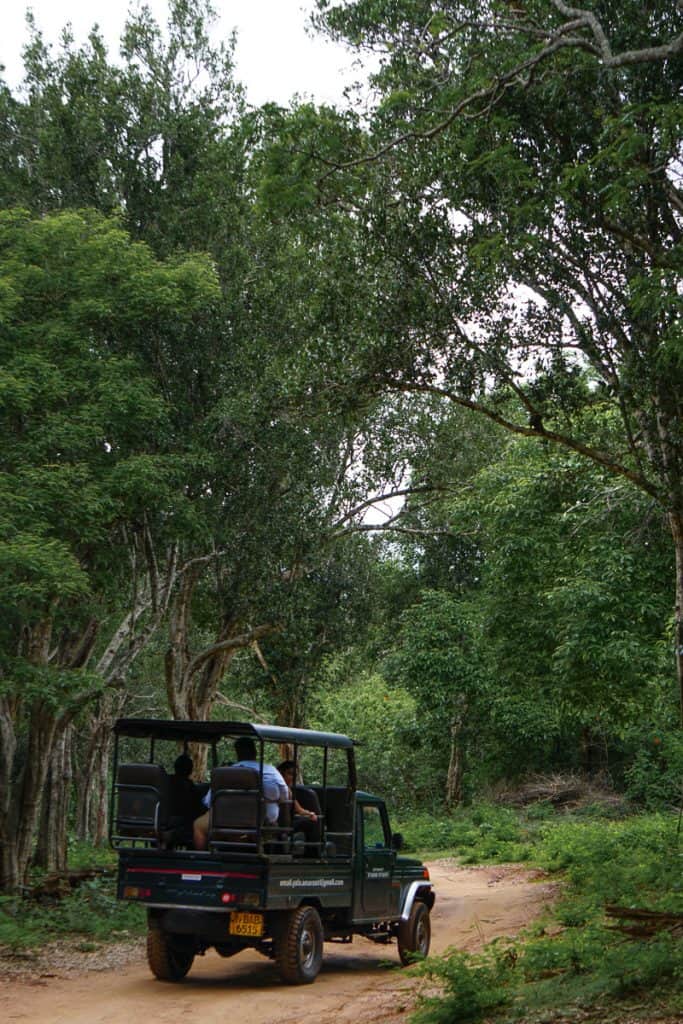 Additionally, it also helps when your jeep safari is organized by a local luxury hotel who knows what they’re doing and provides a guide along with the park’s tracker guide. We got most of our information from Vidu, the guide provided by Cinnamon Wild Yala.

The air-conditioned villa-style jungle chalets are modern, luxurious and spacious, but have a warm, rustic flair that you’d expect in a safari resort, with touches such as mellow lighting, wood fittings and high ceilings. If you like to start your day early, then your terrace is a great place to enjoy a cup of tea and watch peacocks or buffaloes go about their business early in the morning. 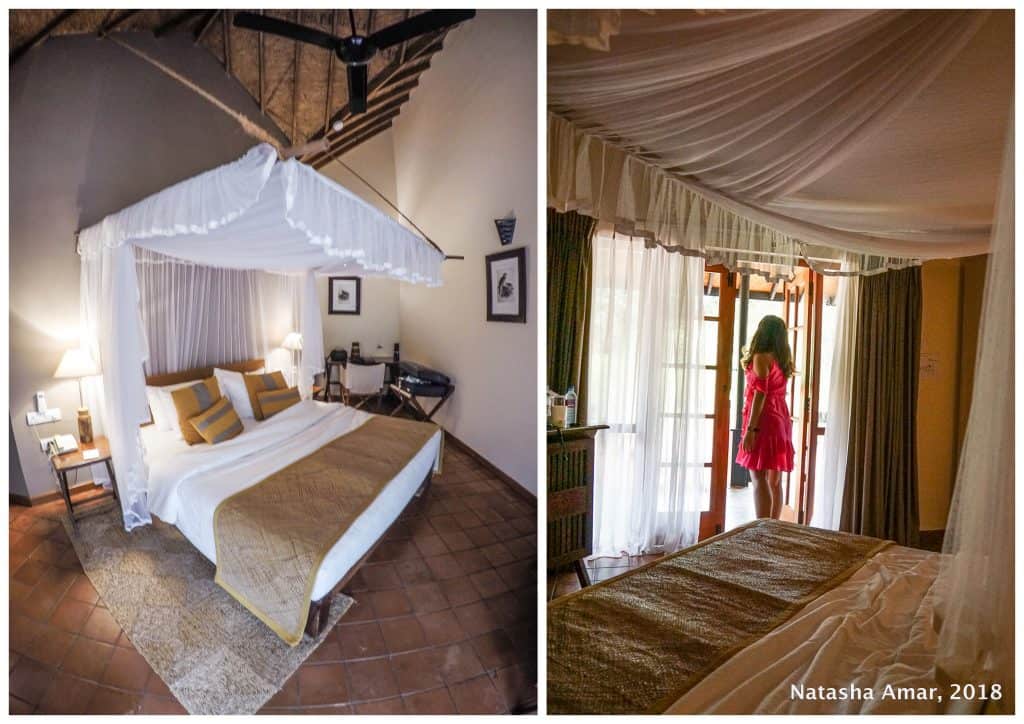 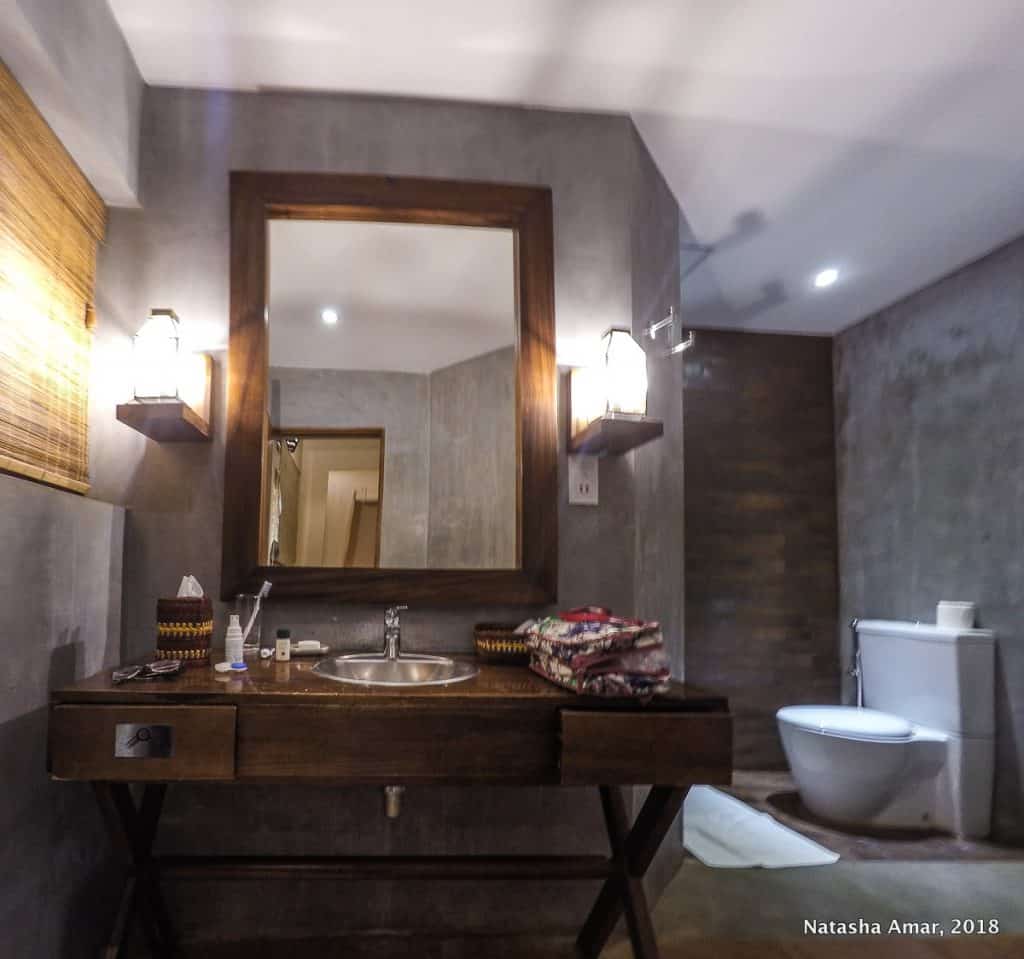 Chalets come with complimentary tea and coffee making facilities, free Wi-Fi, safety lockers, and cable TV. Rain showers in the bathrooms offer much needed relaxation after a day of activities.

Each night, I’d hear the animals, that I’d assumed were either monkeys, peacocks, or deer, going about their nightly walks around the resort. Later, I learnt that buffaloes and elephants hung around the resort’s swimming pool at night! To say that it was thrilling, even though I was safely behind my locked door, would be an understatement.

Tuskers, the main restaurant at Cinnamon Wild Yala offers a lavish buffet of Sri Lankan dishes as well as international cuisine with grilled meats, pasta, pizza, and a wide choice of salads, appetizers, and desserts.

For light meals, you can dine in the heart of the jungle at Pug Marks. The resort’s rooftop bar offers panoramic views over the area. 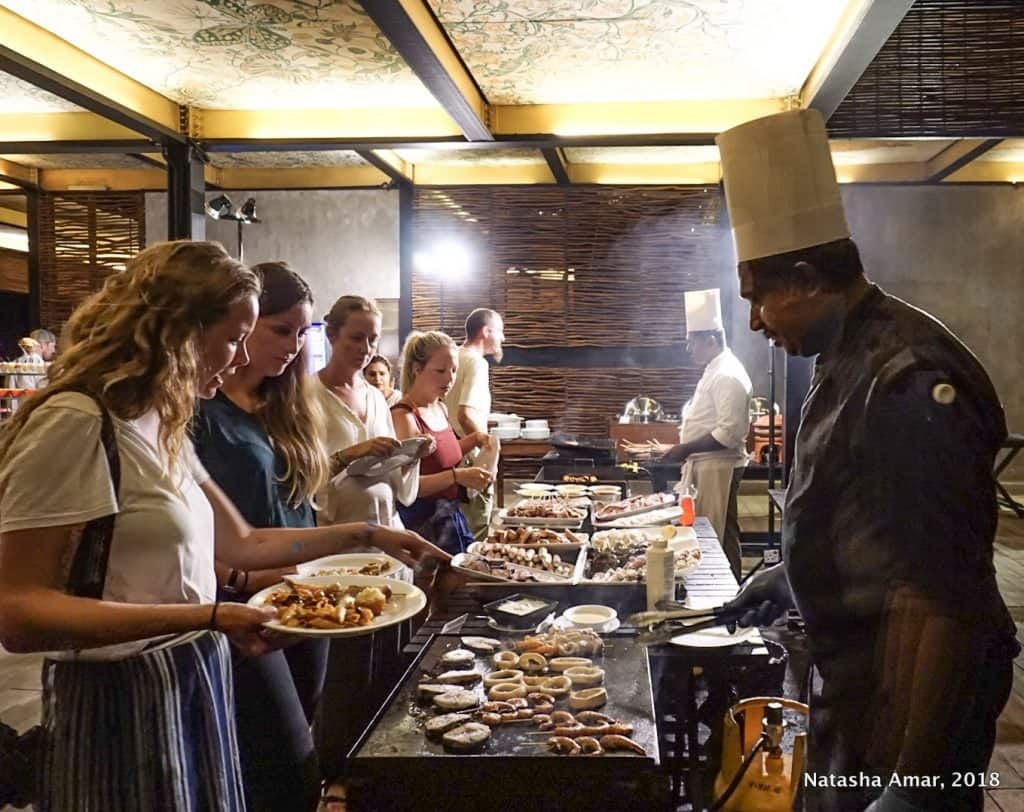 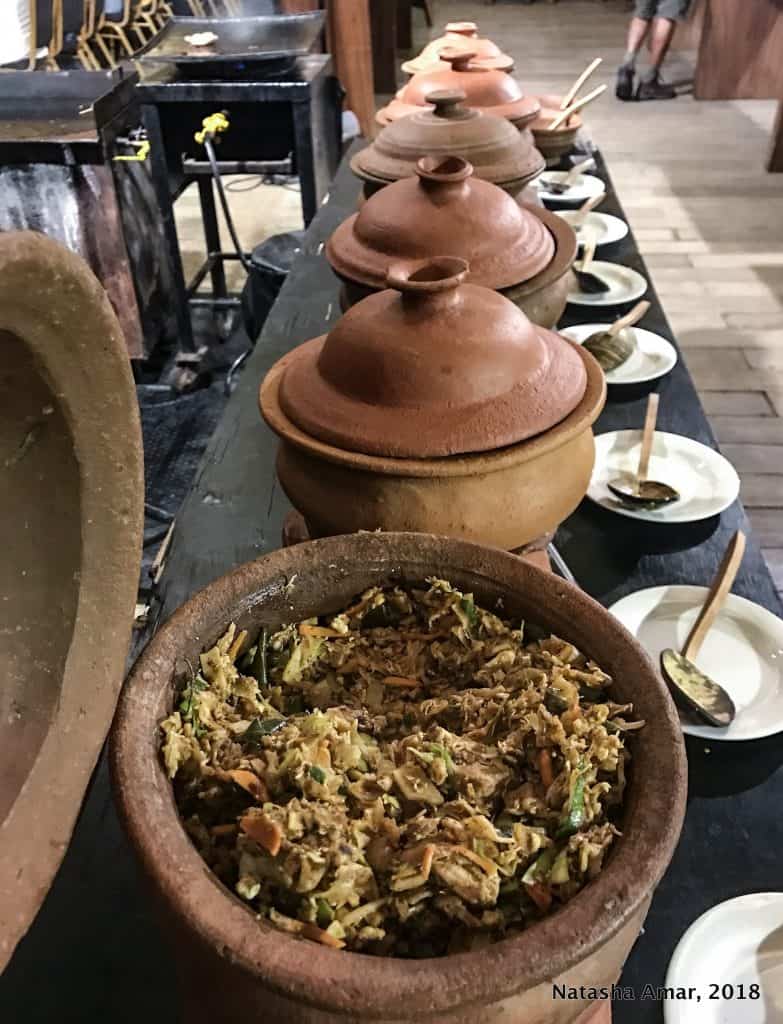 The resort also arranges destination dining experiences for guests where they can enjoy breakfast or dinner in the wilderness. We were treated to a grand barbeque feast at Pug Marks with grilled fresh fish, prawns and meat, as well as a buffet spread of dishes.

Other Activities at Cinnamon Wild Yala

The hotel’s swimming pool is great to relax in after you’ve had a hot, sweaty wander around the property, or if you simply want to have a relaxing start to your day. Azmaara Spa offers a range of soothing and rejuvenating treatment for guests looking to unwind.

If you want to get a bit of physical exercise in and learn about the flora and fauna of the park, then the Guided Nature Walk is an excellent way to do that. We went on a Nature Walk with a Cinnamon naturalist the morning before our safari. 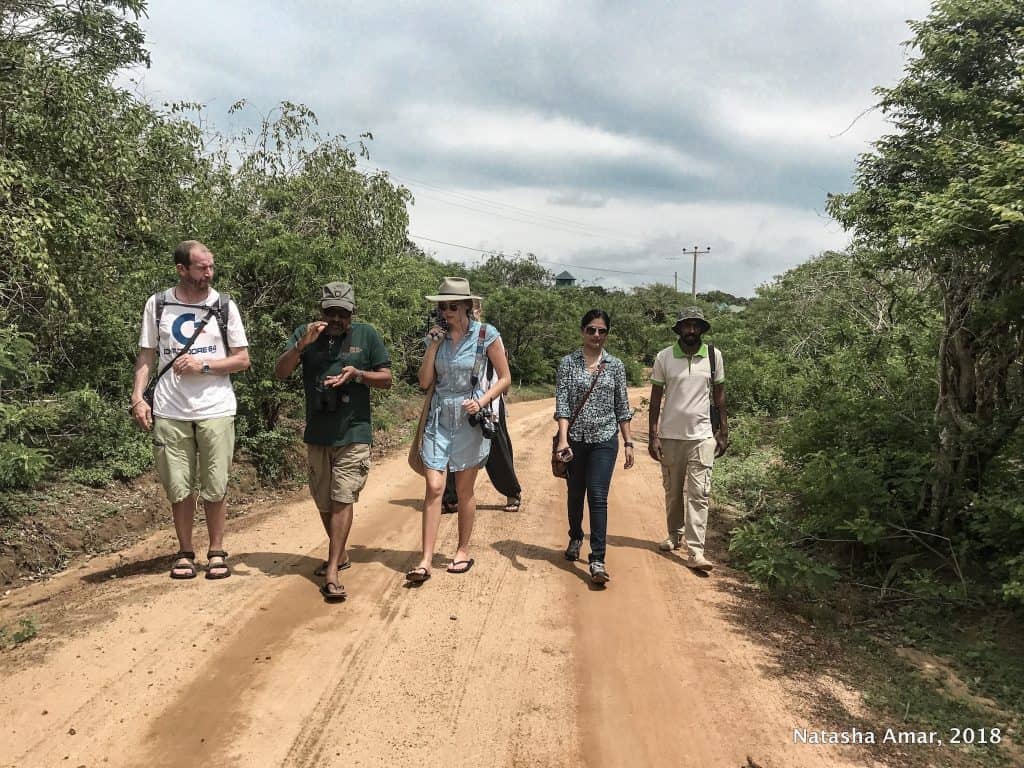 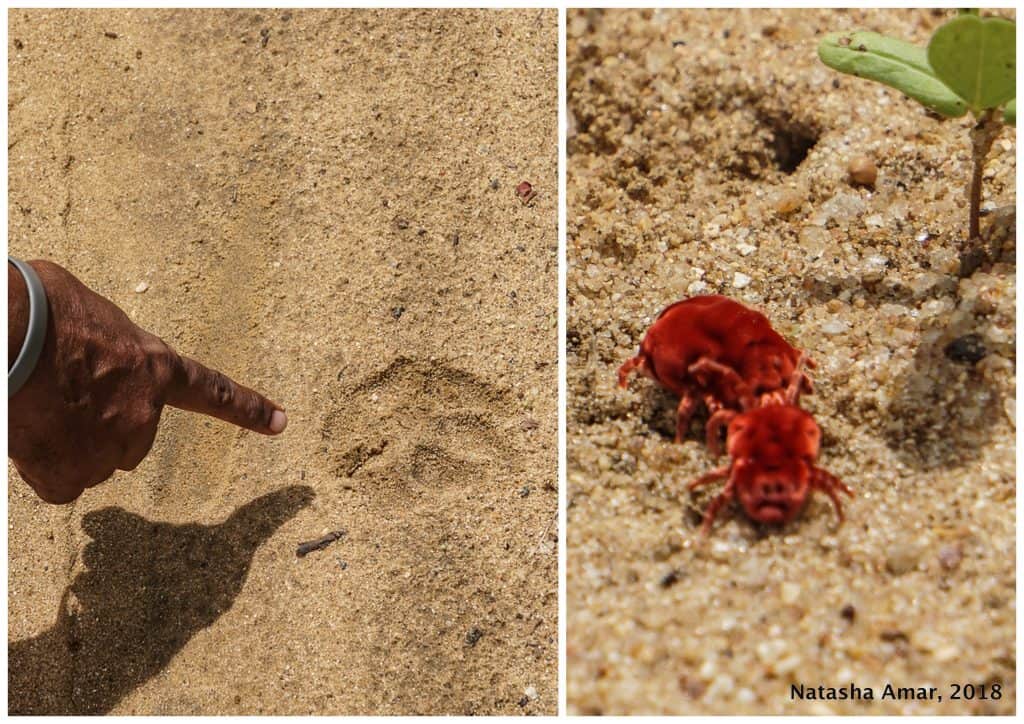 Water buffaloes glanced at us curiously, their heads peeking out from the cool water of the lake on the property. We saw the tiny creatures of the park, such as the red velvet bug, and spotted fresh leopard and wild boar prints. Fishermen sat outside their makeshift huts on the cliffs overlooking Yala Beach. Our walk ended with a few minutes of watching the mighty waves of the Indian Ocean crash onto the wild coastline, carefully crafted by the wind and sea. 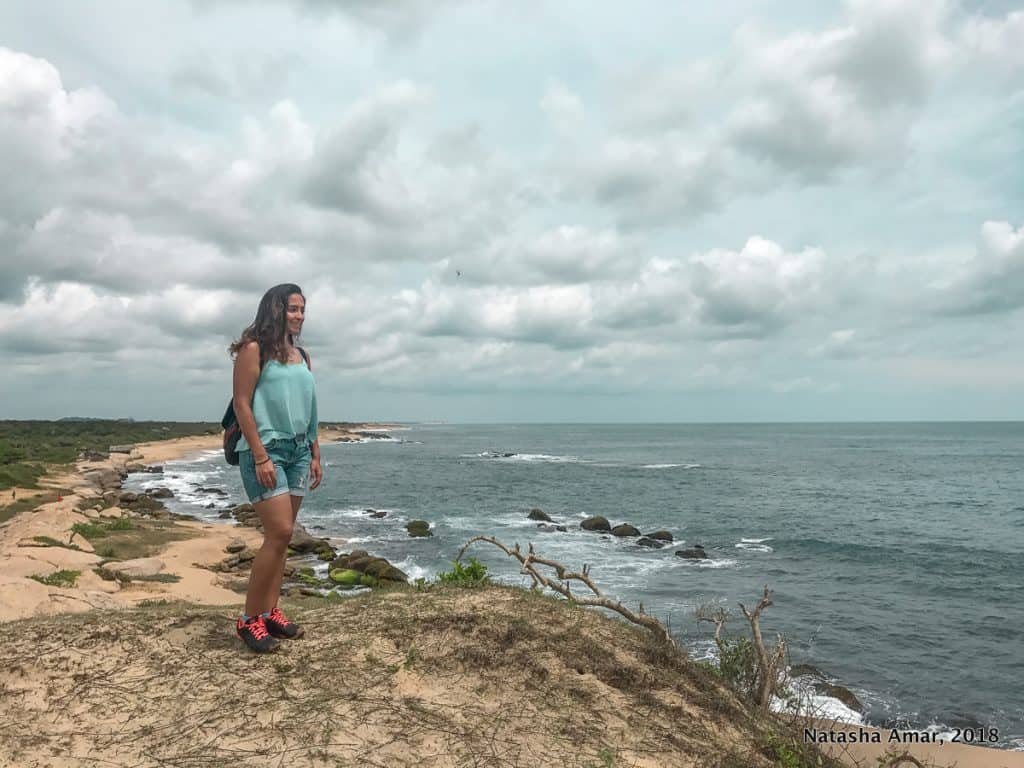 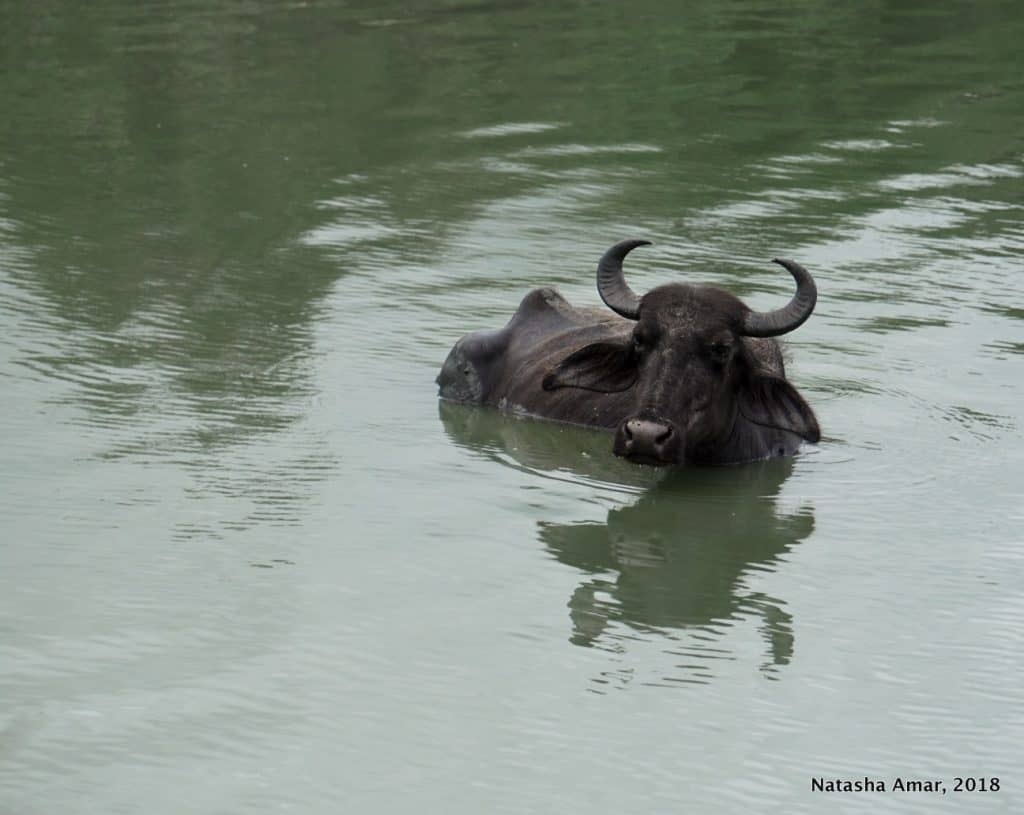 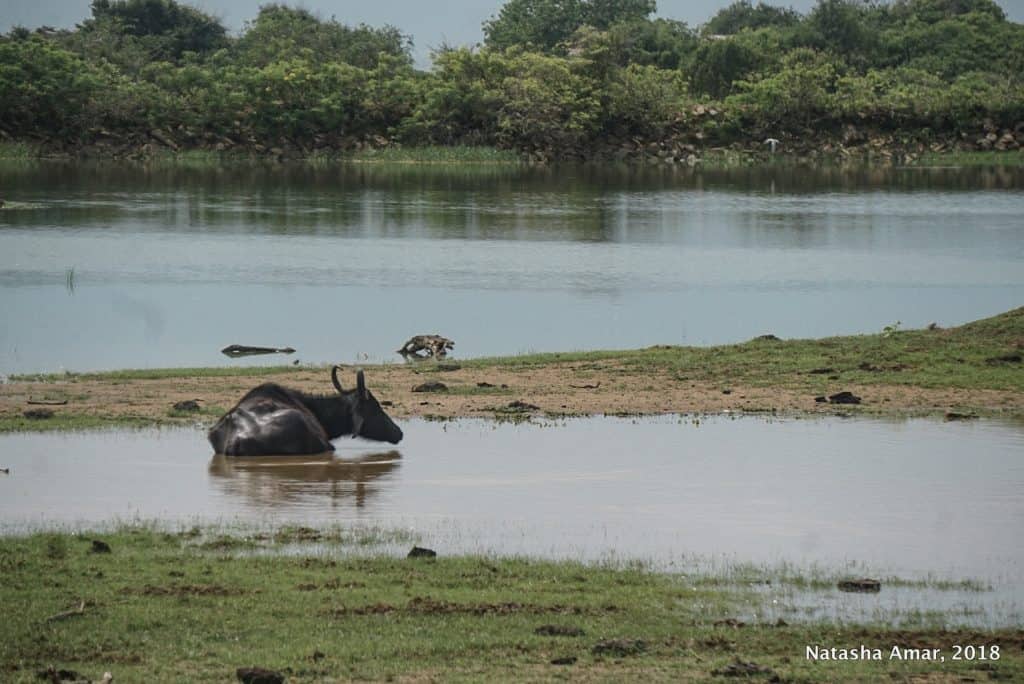 The lake at Cinnamon Wild Yala 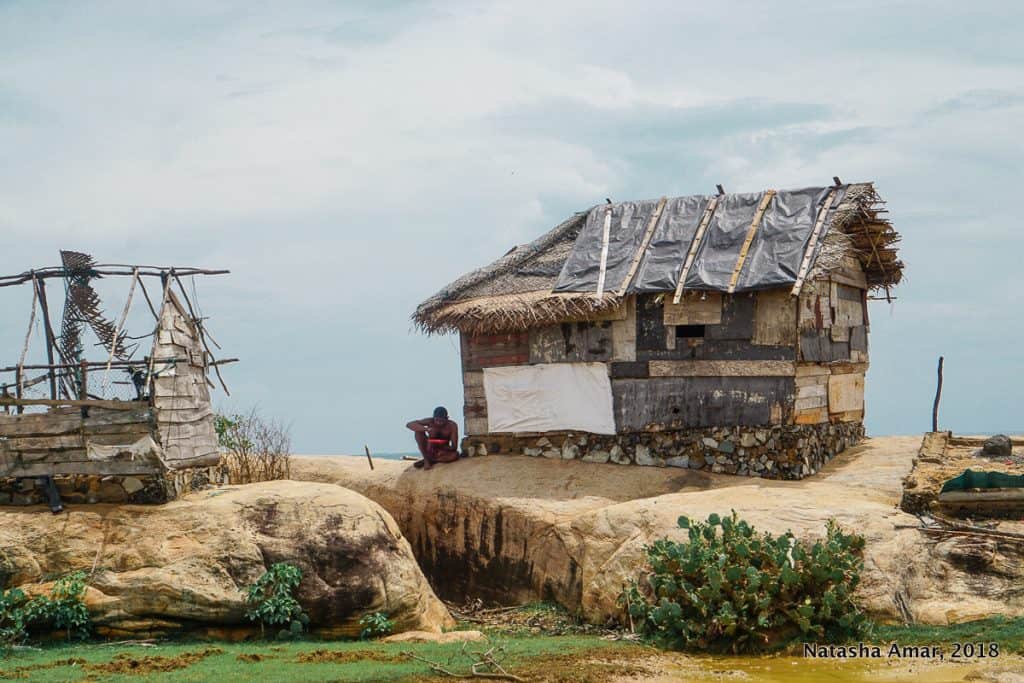 A fisherman outside his hut at Yala Beach 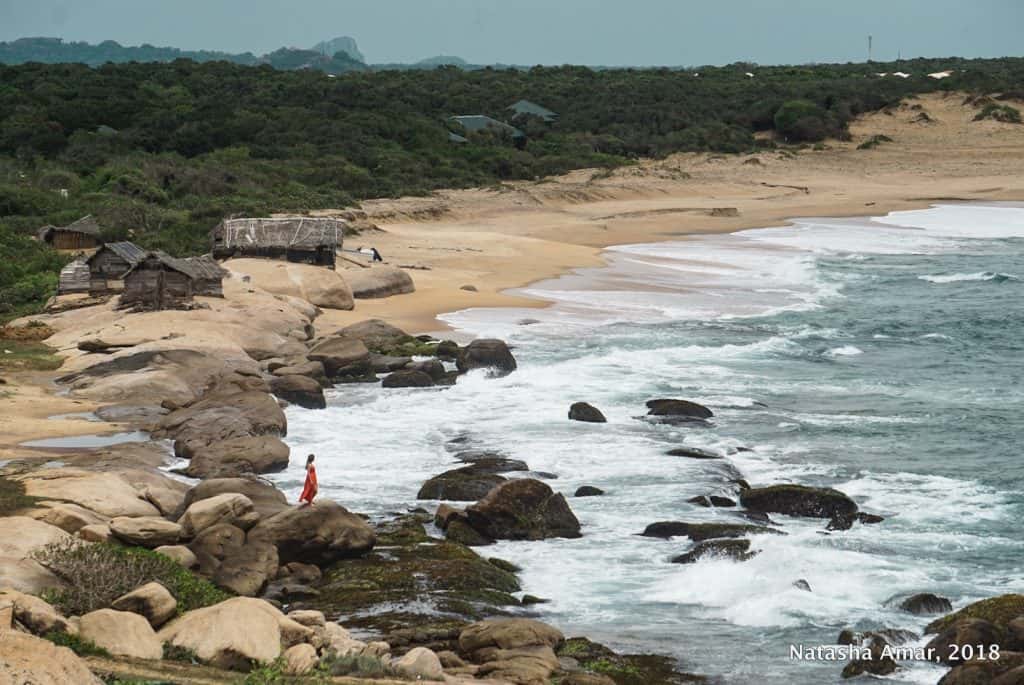 If you have a few days, the resort also offers other nature and wilderness experiences.

How To Get To Yala National Park

The best way to reach Yala National Park is by road. You can hire a car and driver at very affordable rates in Sri Lanka. Here are the driving distances and times from major cities and towns nearby:

You’ll probably want to get to the area an evening before, so that you can head to the park, hire your safari jeep and driver early the next day and make good use of the day to get the most out of your Yala National Park Safari. 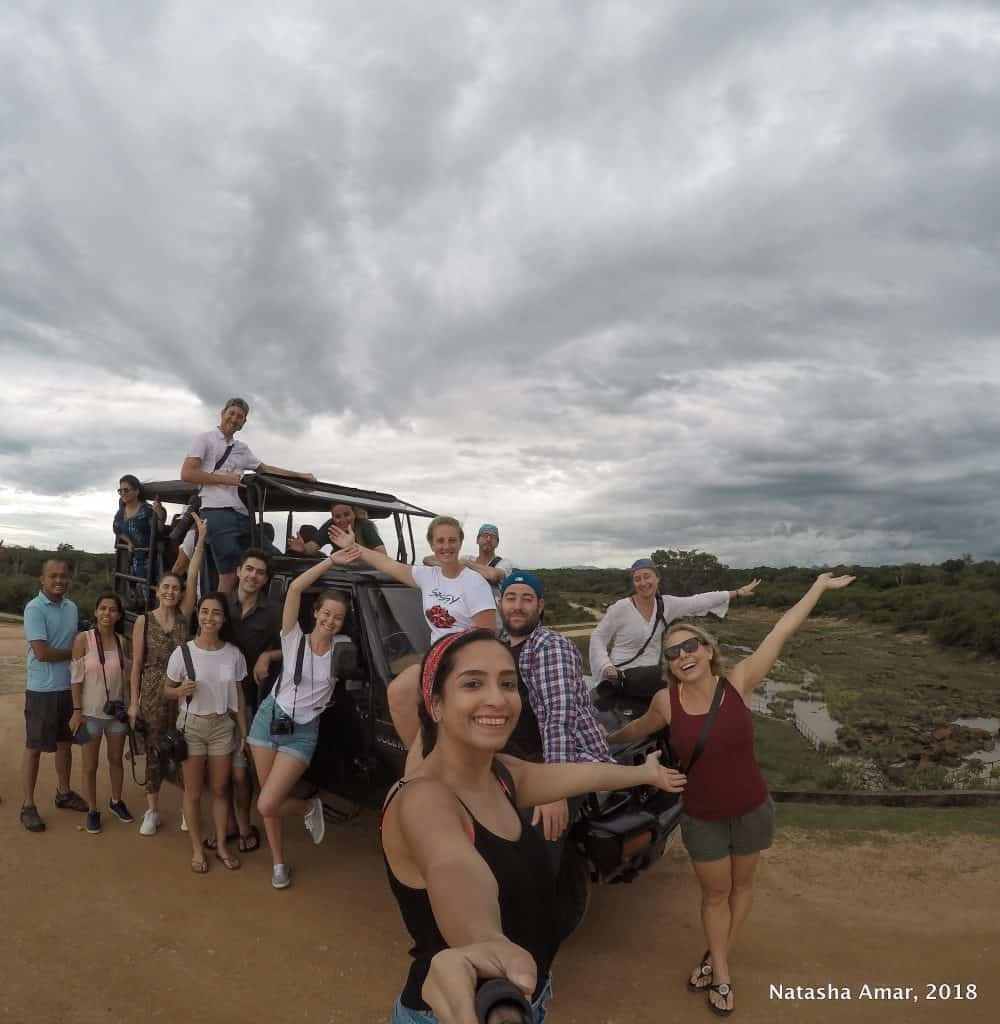 9 Things to do in South Sri Lanka

What to do in Nuwara Eliya in the Hill Country

Wandering the Streets of Galle

A Guide to Festivals in Sri Lanka

I visited Cinnamon Wild Yala and Yala National Park as a guest of Cinnamon Hotels & Resorts and Sri Lankan Airlines. All opinions, as always, are honest and independent.

Is a Sri Lanka safari tour on your bucket list or have you experienced a safari in Sri Lanka before? Tell me all about it in the comments below.

Traveling to Sri Lanka? Apply online for your e-visa. Also, here are 9 amazing things to do in south Sri Lanka, what it’s like to visit the Hill Country, hike World’s End and take the famous train to Ella. 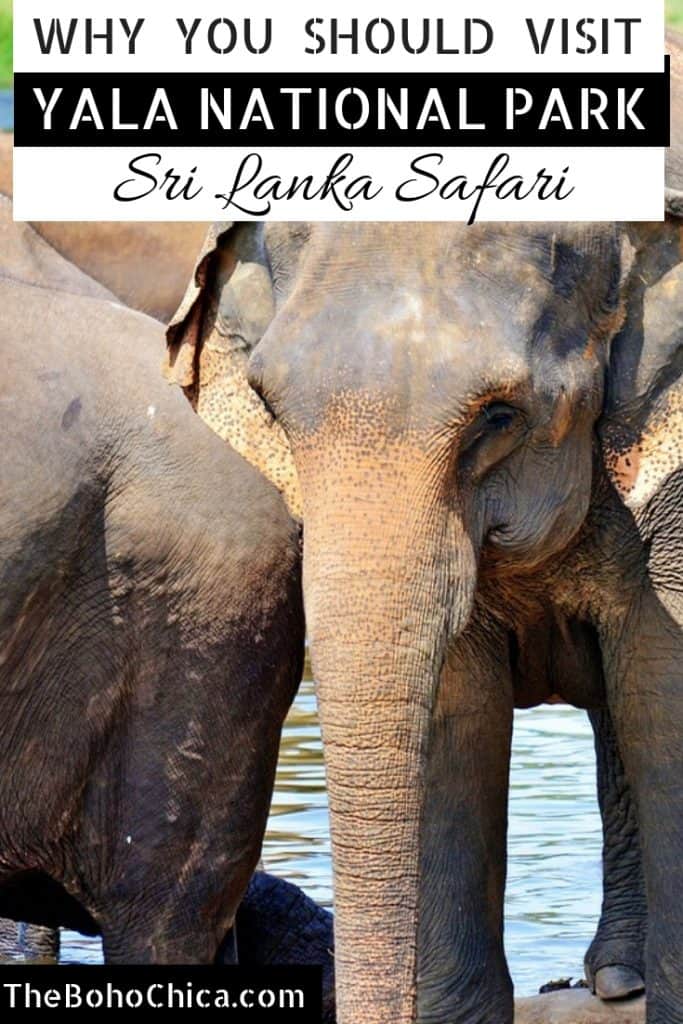 Hey Natasha, thank you for sharing your experience with us. This is such an informative post. I too had the fortune of visiting this splendid national park last year with my friends. It is such a great place. We got to see elephants and deers and a few monkeys. Was hoping to catch a glimpse of a leopard but no such luck. but overall had a great time here. P.S. amazing photos!!

This brings back some memories, Yala and my stay at Cinnamon were the highlight of my Sri Lanka trip. Loved it! Great post!