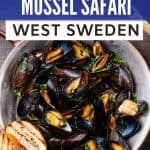 A brisk wind greets me when I arrive in Lyckorna, Ljungskile, in Bohuslän on Sweden’s wind-swept west coast, after an easy 45-minute drive from sunny Gothenburg. Here, a charming clock tower, with a mint-colored roof and white exterior, looks upon the water offering dreamy views; sailboats in the jetty, smooth gray slopes that disappear into pine forests, and emerald islets sprinkled across the sea. Located in what was once a health spa resort founded in 1877 by a Scottish grocer who moved here, today Lyckorna’s old clock tower, Klocktornet, has a new life as a restaurant. It is home to Musselbaren Ljungskile, where not only can you feast on some of the freshest, most delicious mussels you’ll taste in your lifetime, but you can also go on expedition to harvest them from the sea, in a rare opportunity that gets you as close as possible to the source. 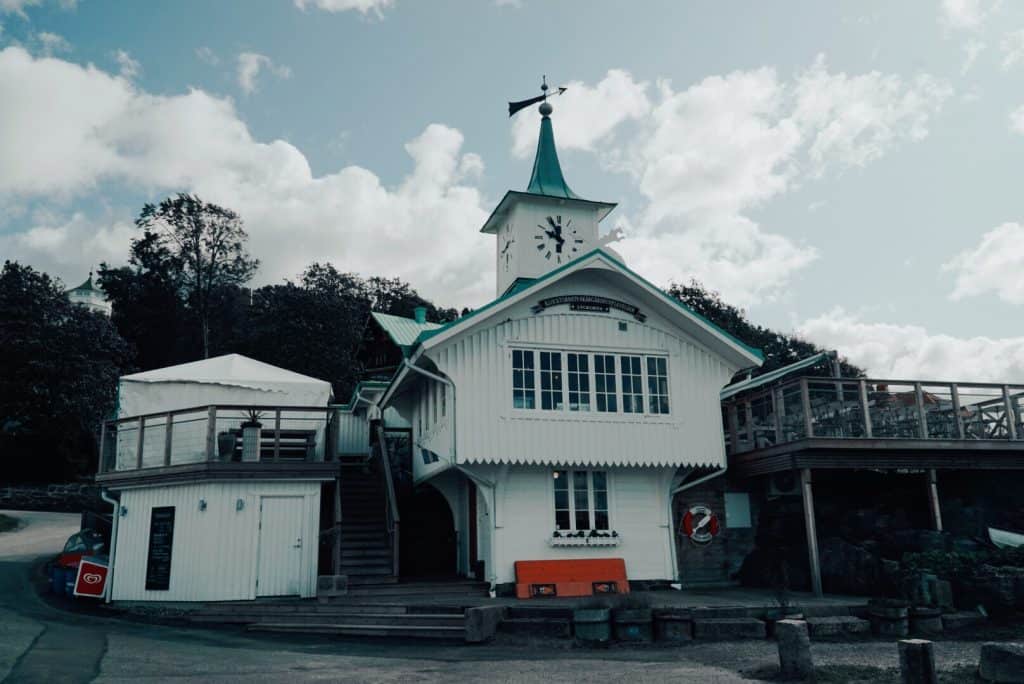 A real highlight of a spring or autumn trip to West Sweden, seafood safaris along the coast offer guests the chance to get in the cold, salty, and clean waters of the Bohuslän archipelago and catch or harvest oysters, prawns, langoustine, lobster, mussels, and unexpectedly, even seaweed. The best part? Before the day’s over, you’re rewarded with a grand seafood meal that features the catch of the day.

Harvesting Mussels on a Mussel Expedition with Musselbaren

I’m here to go on a blue mussel expedition, but really to enjoy the freshest mussels I’ll ever have tasted, coming from Dubai, where most shellfish is flown in from elsewhere. My group of ten is greeted by guide and skipper Anton Kämpe who suggests we put on some warm suits before getting onboard the M/S Märta II that will take us into the surrounding fjords. I clumsily wiggle into a suit, that is a size too large. over my parka, then waddle around penguin-like until it’s time to step on the bright red and white fishing boat. 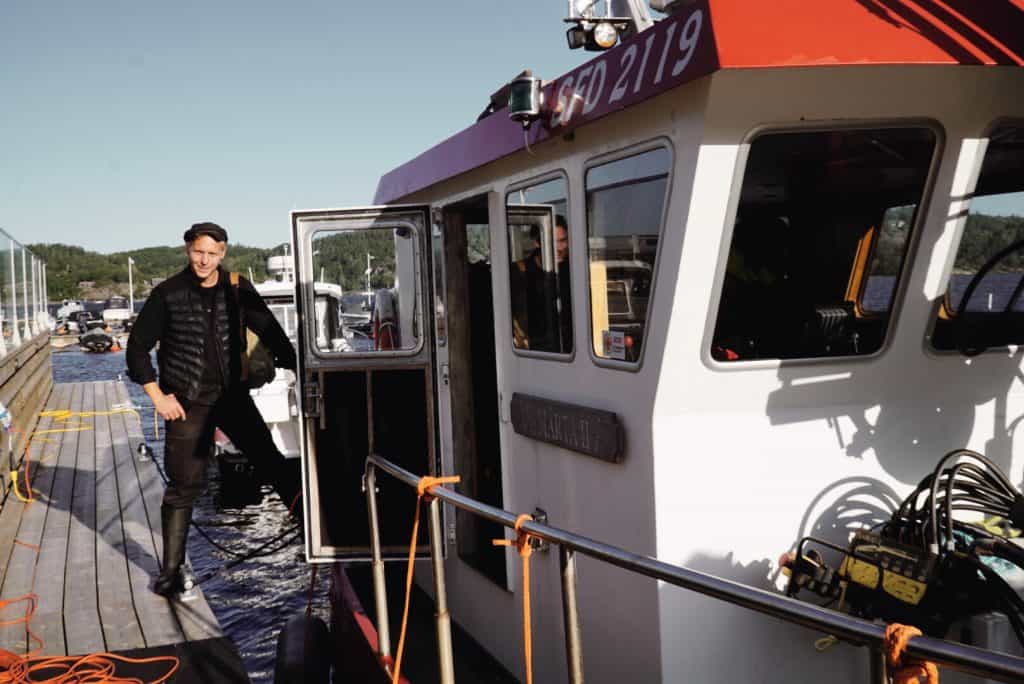 Once on the water, the group huddles on the deck to chat over hot coffee, poured into cups from thermoses, while the wind picks up, slowly but surely spraying salty seawater everywhere, eventually drenching our warm suits. Beautiful hilltop houses with mustard walls and red roofs stand scattered along the green coastline, and Lyckorna’s Klocktornet makes for an even prettier sight across the water, like an illustration in a children’s fairytale.

We’re headed to the cultivation rigs of Musselbaren partner Scanfjord in the fjords around Orust, where mussels are harvested sustainably and expeditions run from April to October. The chilly, clean waters of the Bohuslän archipelago in West Sweden mean that mussels and other shellfish such as oysters grow to a good size, and are packed with rich flavor.

They’re great for the environment too; mussels are filter feeders and they improve the ecosystem around them by removing excess nutrients and phytoplankton (which means less food for algae) from the water, keeping it clean. A kilogram of mussels can filter as much as 6,000 liters of water in a single day. The harvest period for mussels, from when the larvae are released and trapped in the ropes to when they’re mature enough to be eaten, lasts about two years.

At the rigs, Kämpe uses the boat’s crane and pulley to bring up our harvest from hanging farms, where blue-shelled mussels have been maturing on beltings suspended from buoys, clinging tightly to them by beard-like fibers. After taking what’s needed for our meal, it’s time to get to work to scrub and clean the mussels. We follow his example, using a stiff brush to get rid of grit and pull off the beard-like barnacles, to reveal shiny blue shells, the color of the depths of the very sea we’re in, that will become our lunch. 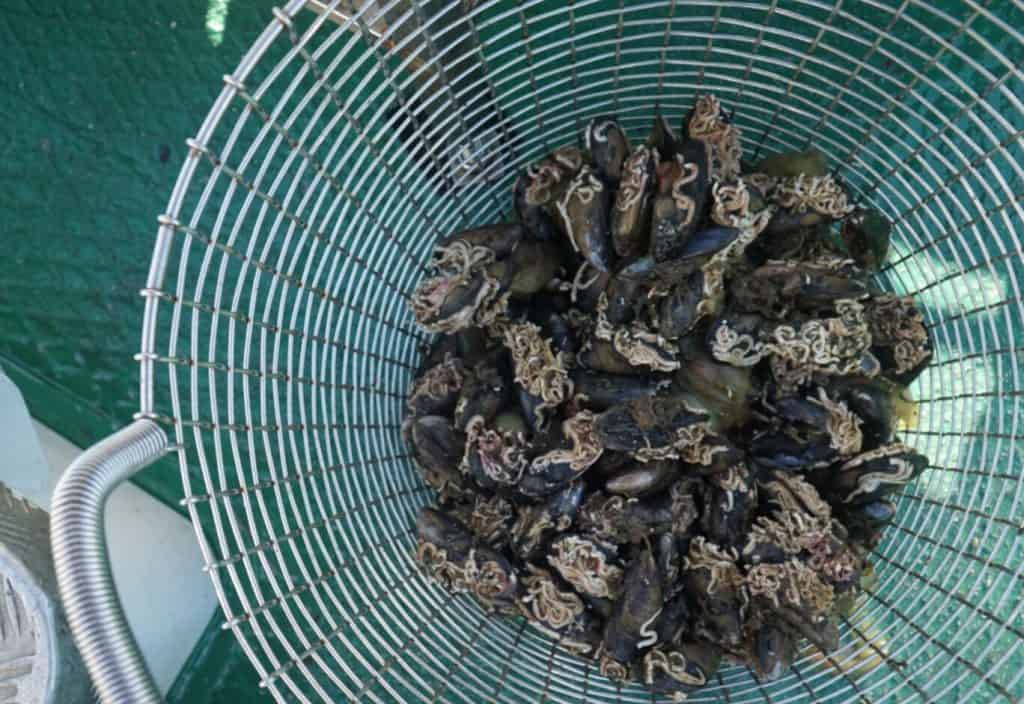 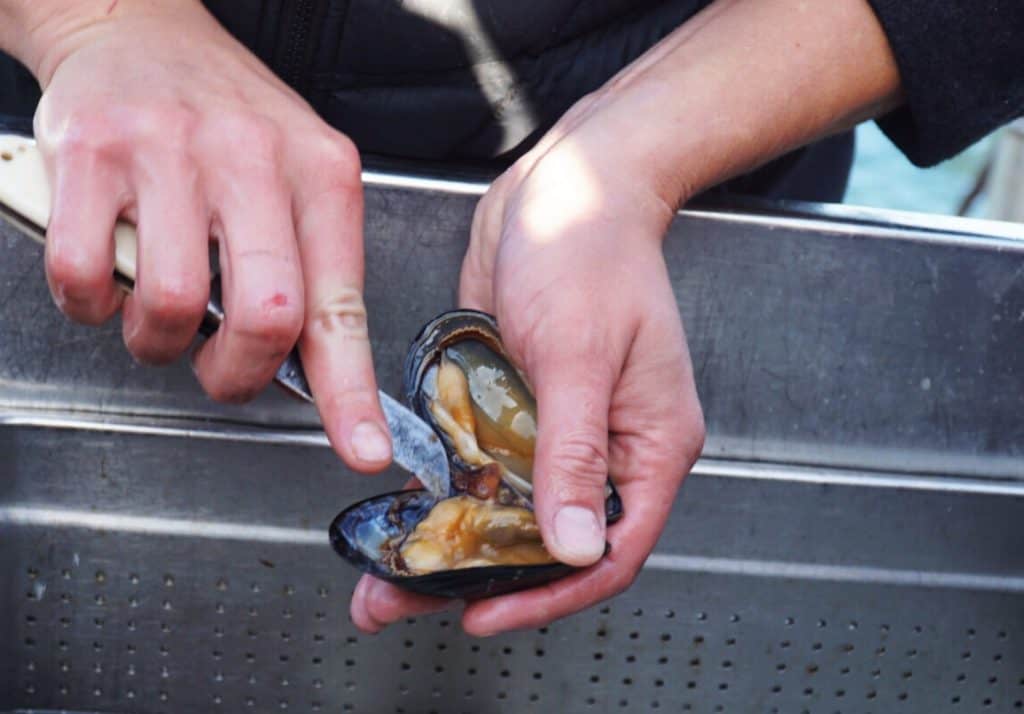 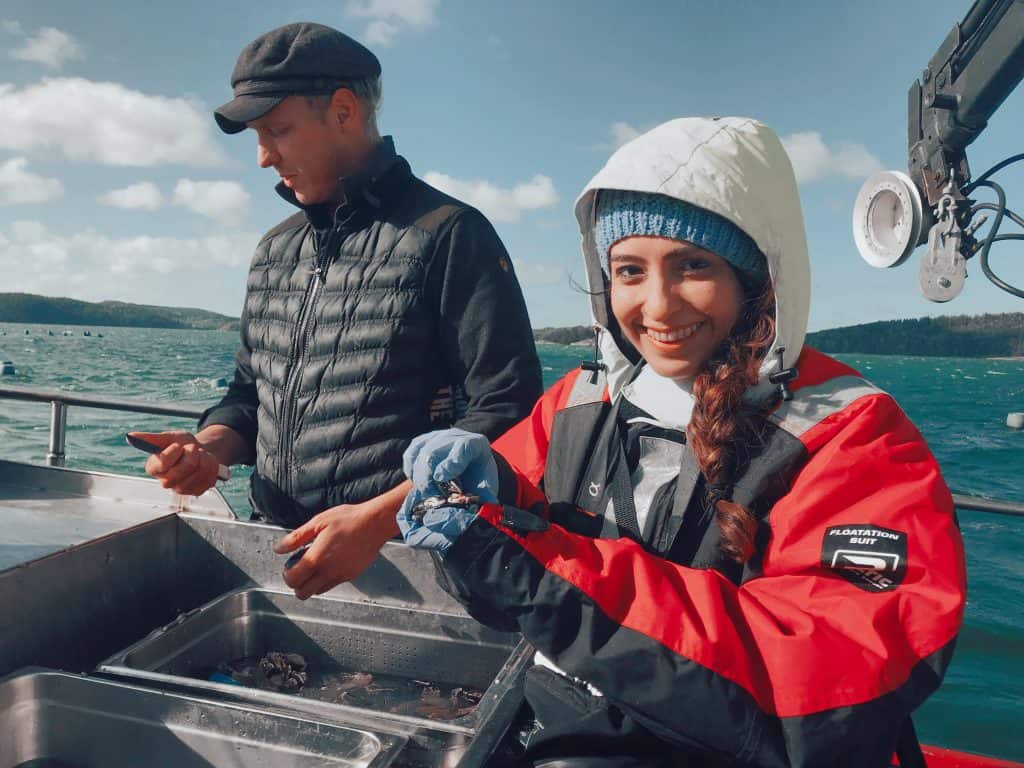 No feeling like being on a boat! On mussel expedition with Musselbaren Ljungskile.

Soon, we’re feasting together, strangers from around the world, on Lyckorna’s blue gold, along with homemade bread to soak up the sauce, aioli, and thick-cut French fries. The conversation ebbs and flows, our bellies and hearts fill up with the taste and texture of the delicious, plump mussels, and the piles of empty shells before us grow quickly. Through the window of the beautiful and historic dining room of Klocktornet, I look across at the shimmering surface of the water and smile, relishing the taste of Bohuslän that lingers on my tongue. 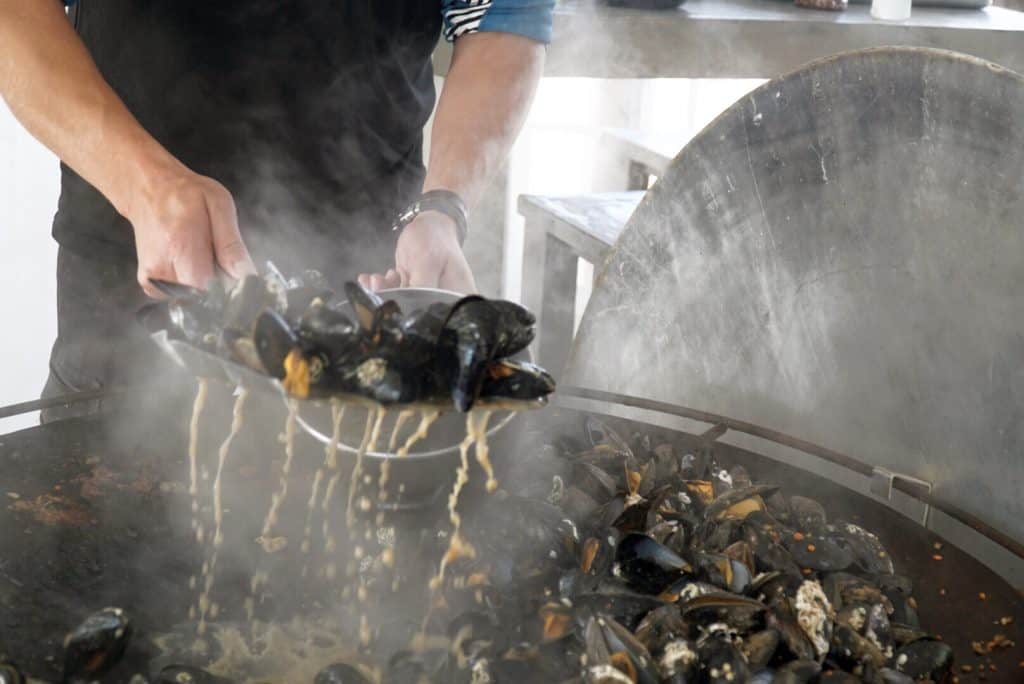 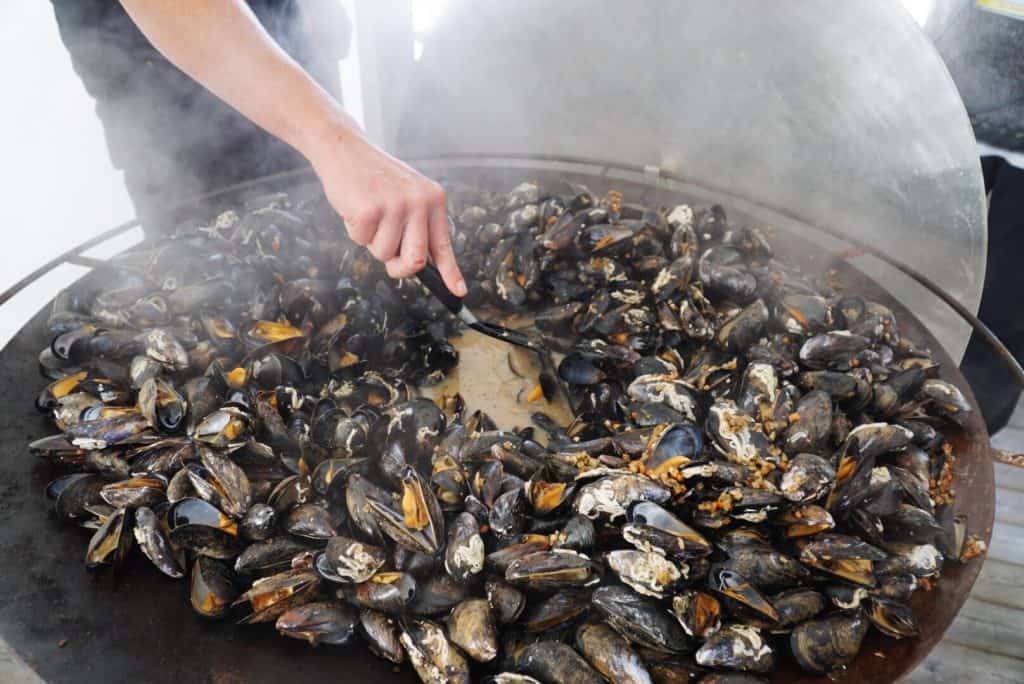 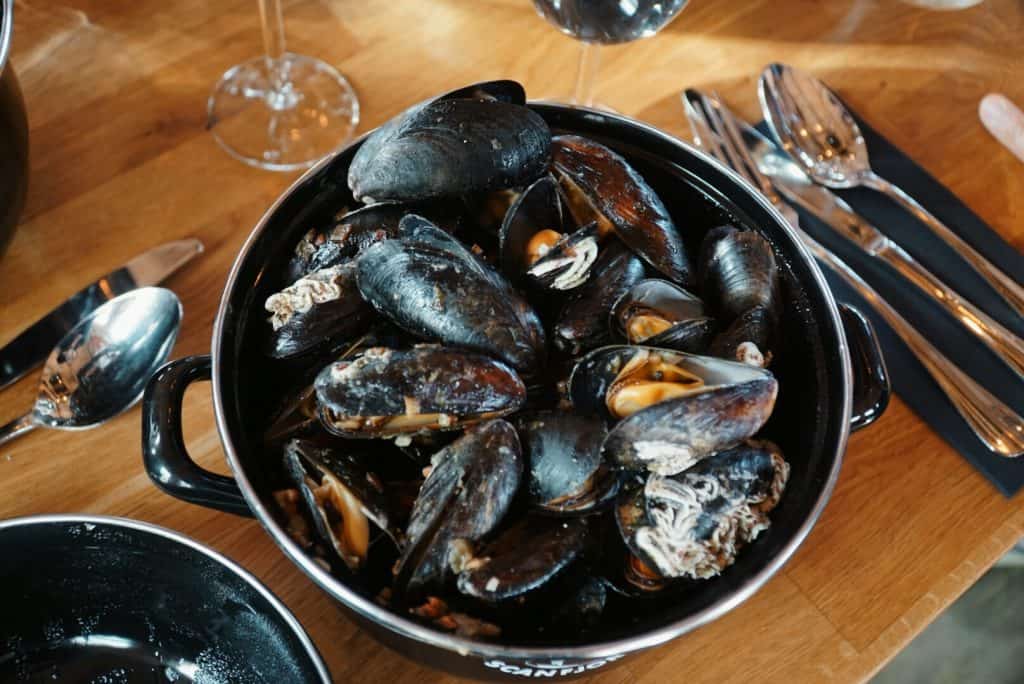 Musselbaren offers mussel expeditions from April to October. You can book with them directly, or get in touch to check if tours are available at other times of the year.

The expedition takes 4.5 hours including cooking the mussels and lunch at Klocktornet.

West Sweden also offers a host of other seafood safaris. Find one that coincides with the season of your visit. 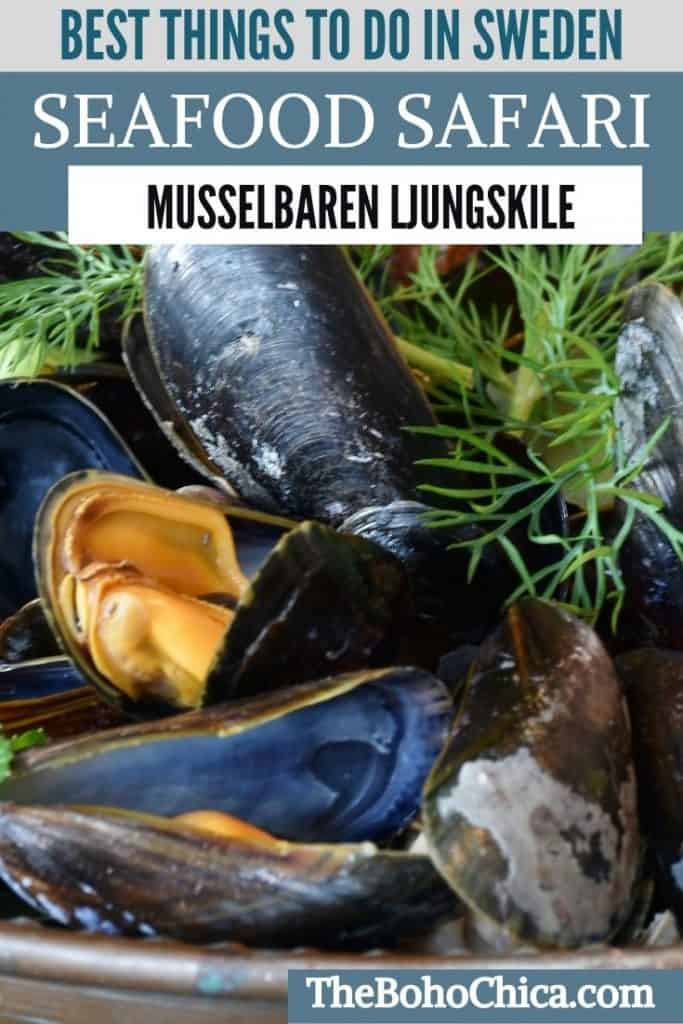 Traveling around Sweden? Check out these posts or visit my Sweden page to plan your trip.

18 Reasons to Visit Stockholm & Why You’ll Love It

A Taste of the Arctic in Swedish Lapland

Exploring Utö: The Island of Love in the Stockholm Archipelago

I visited Musselbaren and joined the expedition as a guest of West Sweden Tourist Board. All opinions, as always, are honest and independent.