With the Pacific Ocean on one side and the mountains on the other, lush and green Hualien is one of the most popular places in Taiwan, and with good reason. Hualien is best known for the amazing hikes in Taroko Gorge, but there are so many other things to do in Hualien that get overlooked, well worth a visit for their own sake.

Hualien is a short two hour train ride from Taipei and should be added to everybody’s Taiwan itinerary, especially if they’re looking to spend a few days exploring outside of Taipei city. While Taipei is pretty green, if you’re looking to experience nature close to the city, then Hualien, with its hiking trails, sandy beaches, waterfalls, wild rivers, tea plantations, hot springs, and lakes, is a solid choice that can keep you busy and active for days.

I recommend you add an extra day onto your Hualien itinerary and dedicate it to exploring all the things and attractions Hualien has to offer outside of Taroko Gorge. 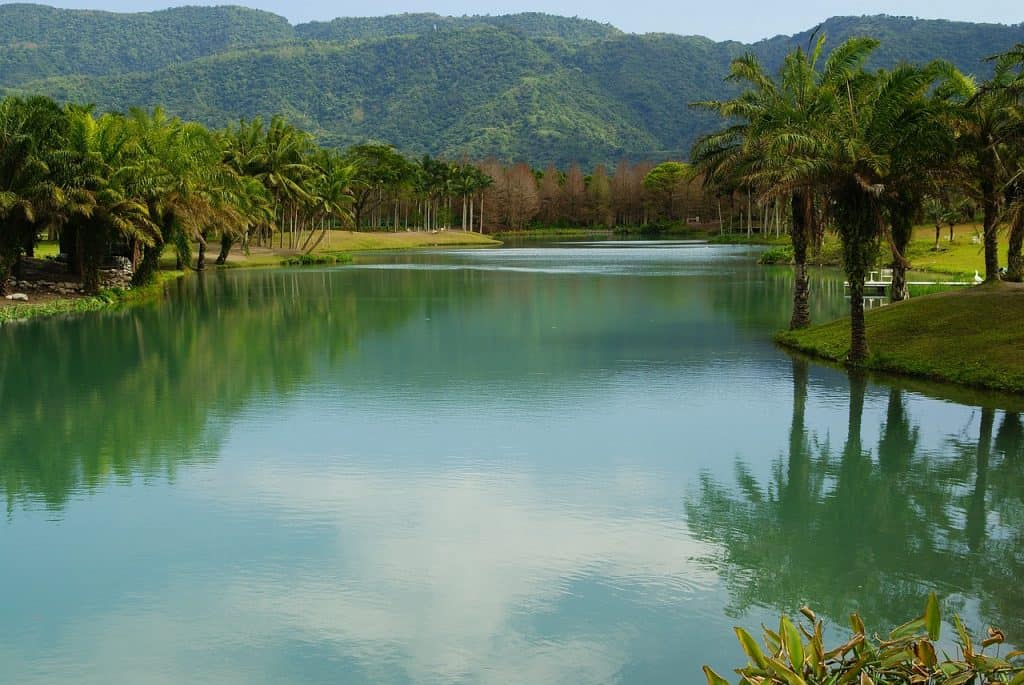 So, without further ado, let’s jump into the top 5 things to do in Hualien city that aren’t hiking in Taroko Gorge.

Things To Do in Hualien City

You can find all the classic Taiwanese street foods at the Hualien Night Market. There are stalls that sell pepper buns, fruit juice, wontons, Taiwan hamburgers, and even pasta. Dongdamen Night Market truly has it all, and no matter what your palate, you’ll find a food you can’t get enough of!

A cool thing about Dongdamen Night Market is that most of the stalls have a seating area in the back of their stalls where you can sit and enjoy your food. Perfect for weary feet after hours of browsing and shopping.

You order and pay for your food at the front of the stall and then are shown to the back of the stall where there are plastic tables and chairs set up for diners to enjoy their food. It makes for a far more relaxing experience than at other Taiwan night markets where you eat at communal tables in the middle of the road.

It is for that reason that the Hualien Night Market is my favourite night market in all of Taiwan. Plus, the food is incredible! The market is a 30 to 35-minute walk from the bus and train station, and it isn’t well serviced by buses.

If you don’t want to take the time and energy to walk to Dongdamen Night Market, taking a taxi is your best bet. Taxis are relatively cheap in Hualien, and it shouldn’t cost you more than $5USD to get from the train/bus station to the night market.

This is probably the coolest thing to do in Hualien. Hualien Pine Garden is completely underrated and so few people talk about it, but you shouldn’t miss out on experiencing it.

The Hualien Pine Garden was built in 1942 and was an important Japanese naval base during WWII. It served as an important military base for high ranking Japanese military officers and Kamikaze pilots.

After WWII, when the Japanese control of Taiwan ended, Pine Garden was used as a vocational retreat for American military personnel. Pine Garden was eventually returned to Taiwan, and in the year 2000, the building became a special historical sight in Taiwan. 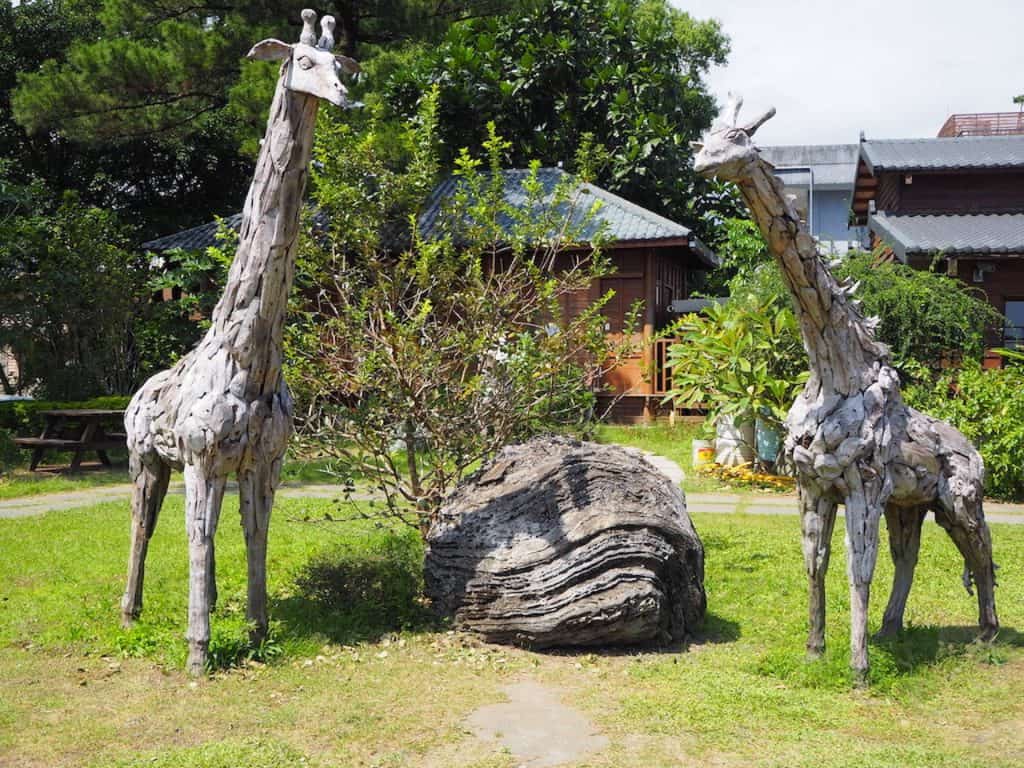 Pine Garden is now open to tourists, and you’re able to visit the rooms Japanese soldiers lived in. The surrounding buildings have been turned into museums, art spaces, and restaurants.

You should take the time to explore both the military buildings and sculpture area. The military area is well worth the price of admission, and your entrance ticket even includes a discount at the restaurant inside the military complex.

Pine Garden is a little bit out of the centre of Hualien city and requires you to walk up a small hill to get to it, but I recommend it. It is one of the most important locations in Taiwanese history, and you’ll learn a lot about Taiwan history at Pine Gardens.

In my opinion, Hualien Cultural and Creative Industries Park is one of the absolute best and most fun things to do in Hualien. The Hualien Cultural and Creative Industries Park is not an actual park but, rather, is a collection of old warehouses that have been turned into an arts and cultural area, much like the cultural parks you’ll see in other cities in Taiwan, including Taipei.

There are a number of these areas throughout Taiwan, and they’re a really great way to explore the Indie, hipster, cool side of Taiwanese culture.

The Hualien Cultural and Creative Industries Park was built over 100 years ago and was designed to be a wine factory. It was then turned into a warehouse complex under Japanese rule before it became the arts space it is today.

The complex is made up of 13 different buildings. On any given day, you can find art galleries, live performances, and a wine museum dedicated to the original purpose of the area. The vibe in the district is vastly different depending on when you visit. It is laid back and mellow during the day but really picks up during the evening.

Most of the art galleries and musical performances are free to visit, so it won’t break the bank to visit the Hualien Cultural and Creative Industries Park.

This warehouse area is by far ones of the hippest things to do in Hualien. It really gives you a sense of modern Hualien mixed with the city’s long and diverse history.

Also visiting Taipei? Here are 39 cool attractions and places to visit in Taipei you should not miss.

It would truly be a shame to visit Hualien and not take the time to visit Martyrs Shrine.

Martyrs Shrine is off the beaten track, and many people who visit Hualien don’t take the time to visit it. (Secret admission: I only found out about Martyrs Shrine because it showed up on my Google maps when I was searching for a restaurant).

The shrine honours the fallen Kuomintang soldiers who died during the Chinese Civil War and the resulting government’s relocation from mainland China to Taiwan. It honours the soldiers who gave their lives fighting against the communist government of China.

It is the sister shrine to the National Revolutionary Martyrs Shrine in Taipei (which you should also take the time to visit while you’re in Taiwan).

The shrine is made up of three separate temples. You’re not allowed to enter the buildings unless you’re there for prayer, but you’re allowed to look inside and walk around the area. 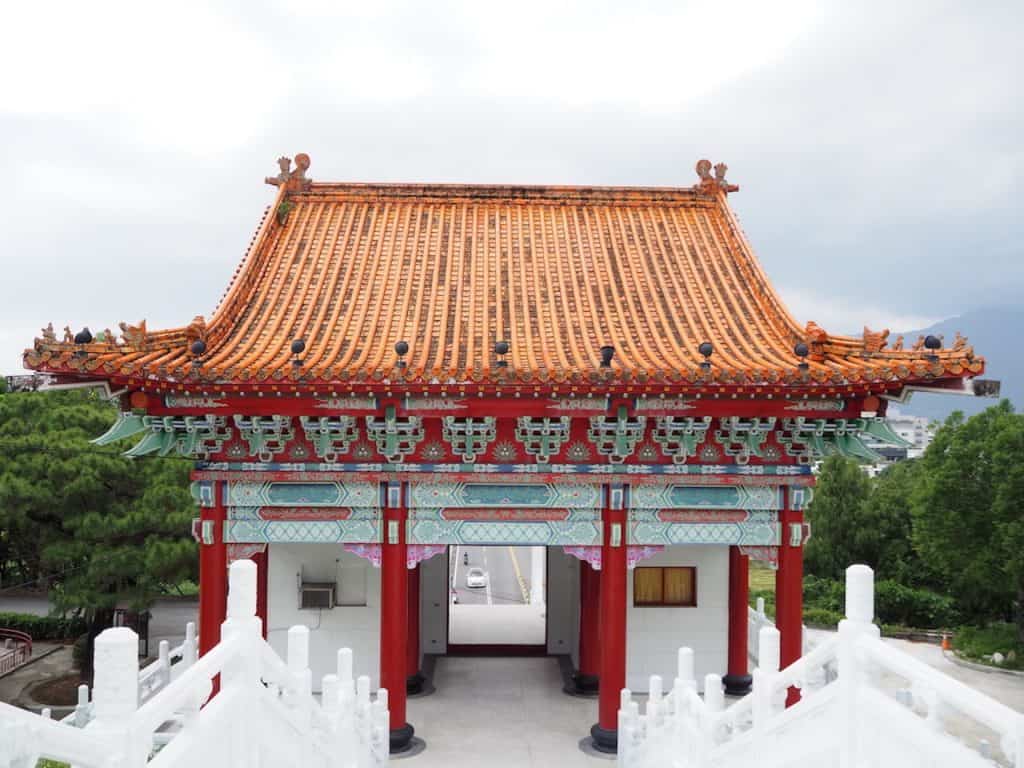 After you’re done visiting Martyrs Shrine, be sure to take the steps beside the left-hand side building. The stairs take you to a short hiking trail that leads to a stunning view of Hualien city.

Take the extra 30 minutes to follow the trail to the viewing area. You’ll get some great pictures (and work up an appetite to indulge in the incredible street food at Dongdamen Night Market)!

The Railways Culture Park is another important historical sight you should visit while in Hualien.

The Railway Culture Park was previously known as the Hualien Harbor Branch Office of the Railway Department and was built in 1932. It served as the headquarters of the Hualien-Taichung railway branch during Japanese occupation. 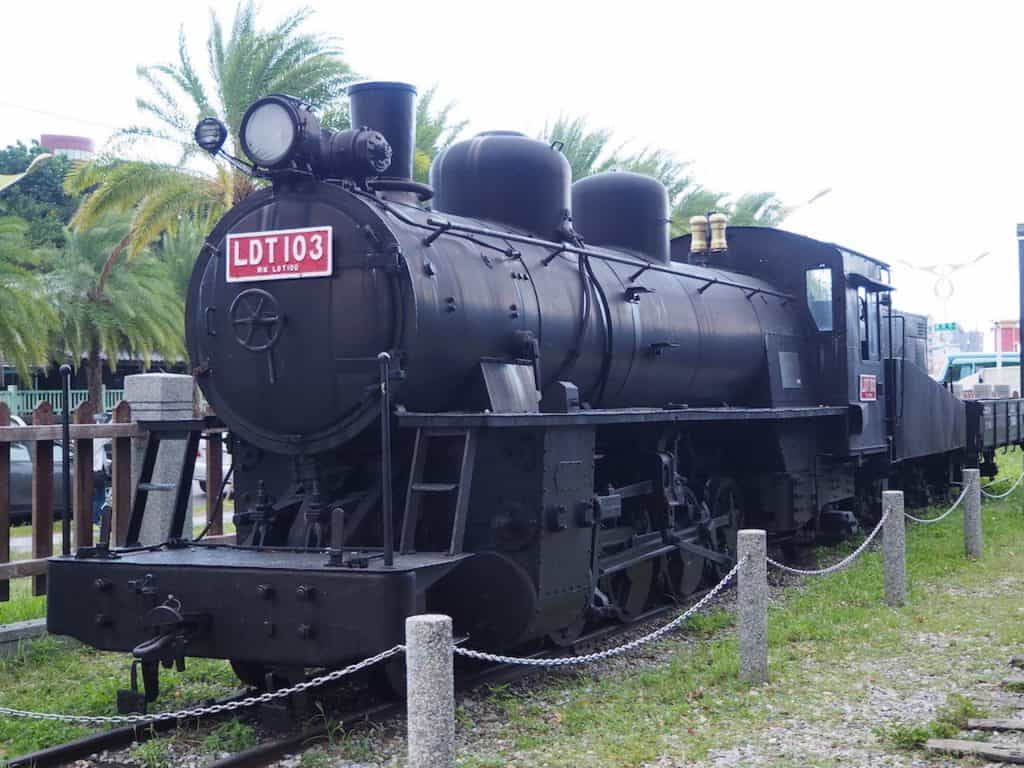 The area was eventually converted to a cultural area that includes the railway station, police section, martial arts hall of the railway department, and steam train water tower.

The cultural park is best known for its astoundingly well-preserved relics from the narrow-gauge railway base. You’re able to view train parks as well as the pilot (front car) of an old steam train.

You can also tour a jail cell used by the Japanese to hold people arrested by the railway police-  the part of the railway museum that I found most interesting.

The Hualien Railway Culture Park is just a few blocks away from the night market, so it is the perfect place to stop on your way to get dinner. It doesn’t take more than 30-45 minutes to tour the entire area, and there isn’t an entrance fee.

There is an amazing cafe at the entrance/exit of the culture park if you’re looking to grab a delicious drink and relax for a while. It is themed after the shiba inu dog breed, and it is absolutely adorable!

Hualien was an important military base during WWII and still is today. It holds a lot of Taiwanese history within its city walls that you can’t find anywhere else in the country.

At first glance, Hualien might not seem to offer much more than a few great days of hiking, but once you dig a little deeper, you realize the city is full of culture.

Your day exploring Hualien city may be one of your favourite memories from your entire Taiwan trip!

What To Do in Taipei: 39 Attractions & Places To Visit

Looking to book your next trip? Check out the following services to help plan your trip:

Erica is an avid solo traveler who has been to over 40 countries. She loves spending long

periods of time in each country to get a sense of the country and culture. Erica’s favourite travel

activities include attending local theatre and dance performances, wandering through museums, eating way too much food, and riding every rollercoaster she comes across. Find her on Facebook and Pinterest.