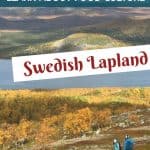 My hair stands on end as Eva Gunnare’s voice fills the air, rising up around the wooden smoke hut, gloriously tangoing with the smoke from the burning logs around which we’re all seated. Her eyes are shut and she sways gently from side to side. Every inch of her being, it seems, is in perfect harmony with the notes of her song.

It feels like this is not real- that it’s a hazy dream I’ll struggle to remember in the morning, or that we’re all floating in another realm somewhere, when in fact we’re all really here in Swedish Lapland, sharing this experience in her home, north of the Arctic Circle, in a town called Jokkmokk with less than 3000 residents, in the land of Sápmi, home of the indigenous Sámi people. While the region is often called Northern Europe’s last remaining wilderness, the Sámi have been living here for thousands of years, their traditionally nomadic lives shaped by the seasons of the Arctic, reindeer herding, and the forces of nature. Jokkmokk is also famous for its winter market that has been held here in February annually since 1605.

“I think people have always gathered around the fire… and it’s better than TV”, she says as we laugh in agreement, “and to live around the fire and to have a round house, it’s also sort of a traditional thing that we have been doing. Other discussions come when you don’t sit in a square room or around a square table.” I have to admit – the setting in the cozy smoke hut, illuminated by just the right amount of daylight that streams in through the partly open door, feels intimate for our group of women travelers, strangers from around the world, united by a love for adventure and perhaps, for venturing as far from home as we possibly can.

Filling bowls with mushroom soup from a pot by the fire, she says, “Something called to me here and I felt like I was home.” Eva is a food creator and culture guide who designs unique nature-related culinary experiences that introduce visitors to the taste of Swedish Lapland. But the village of Jokkmokk, “on the right side of the Arctic,” as she tells us, wasn’t always home for this forager who left behind the city life of Stockholm to work in a mountain station in Swedish Lapland in her twenties. 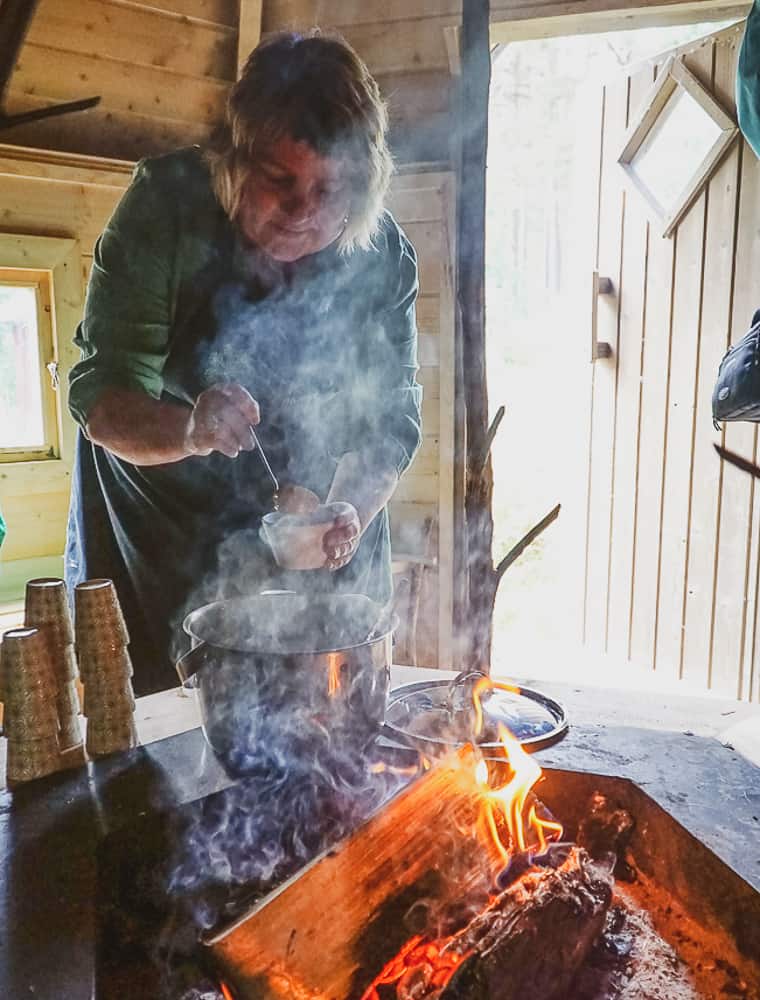 In Jokkmokk, that has been her home for over thirty years, she found a sense of belonging and community, and eventually discovered her love of the fruits of the forest; berries, herbs, mushrooms and all that was edible in nature’s bounty. Through her Sámi husband, she found herself learning about the culture and participating in traditions, deepening both her curiosity for and appreciation of them. Her work today, as she explains, unites her love of nature, food and a sense of constant learning about how the Sami have lived in harmony with their surroundings for thousands of years.

I look around me at the faces that seem to share my state of wonder and amazement at the experience we’re having. It is one of those moments, (that thankfully appear frequently regardless of how much I travel for a living), when I cannot believe what a long way from home I am. If only I could tell the 12-year old me who had never been outside her home of Dubai (and her parents’ of Mumbai) that someday she would travel north of the Arctic Circle- the furthest north I’ve ever been, and sit in a Sámi smoke hut to learn about a culture so different from the ones she’d known. There is a surprising clarity in this moment, even if the memory of it might someday become hazy from the rising smoke. Every inch of my consciousness is filled with a deep gratitude for the privilege to be here.

Spoonfuls of the soup reveal a deliciously rich concoction, what I imagine the forest tastes like- earthy and simple yet oddly satisfying. Minutes later, as she pours second helpings (because none of us can resist the aroma as she lifts the lid), she tells us about when she served the King of Sweden, “he was supposed to arrive at 12.03 and I had to serve the food at 12.06…well, I like to talk,” she chuckles with a glint in her eye.

The Swedes’ love for nature and their ability to connect with it in a way that seems almost spiritual lends a special quality to nature experiences around the country, even when they’re being experienced by otherwise city-dwelling tourists. On Eva’s guided flavor walks, foraging tours, talks and taste events through her company Essense of Lapland, her passion to uncover and share the culinary secrets of Arctic forests, shines through, only enhanced by her storytelling prowess and warm hospitality. 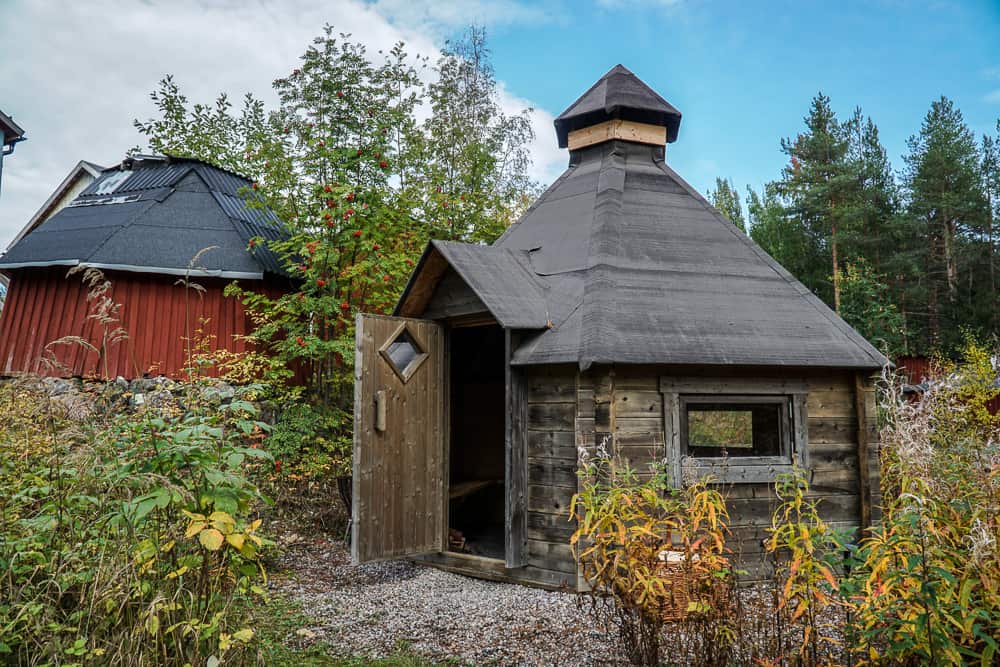 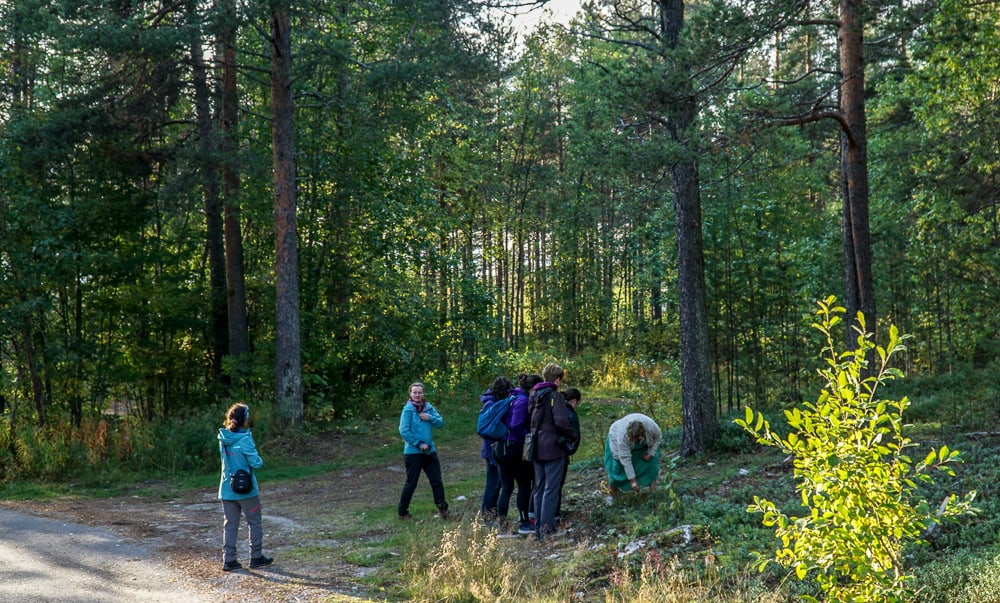 Today, she is introducing us to the eight seasons of the region, beginning with autumn- winter, in the comfortingly warm smokehouse. She passes around a plate of bread. Her hands move passionately as she speaks, “the Arctic people have been eating inner bark from different trees. And this one- it’s pine. How did you like the flavor of it?” she asks, looking around at the faces nodding in mild surprise, contently enjoying rye and pine bark bread.

One doesn’t know what to expect when one hears of ‘culinary experiences in the Arctic’-one certainly doesn’t expect to be enjoying a refreshing drink of birch sap, but the programs created by Eva seek to share some of those traditions and knowledge of food, derived from nature, that had never been documented, and perhaps hardly ever shared with outsiders. She admits that even after a year of formal study about foraging and foods from nature in the Arctic, and several years working at her passion, she is still learning and discovering something new every day.

“Everything is quicker here,” she tells us shortly after, on her terrace where we sit surrounded by green forest, basking in the pleasant sunshine, “I pick a lot of things in the springtime, I pick everything that grows.” She uses the herbs, flowers and plants, to make tea, spices, and cordials, among other things, preserving everything that she cannot immediately use. 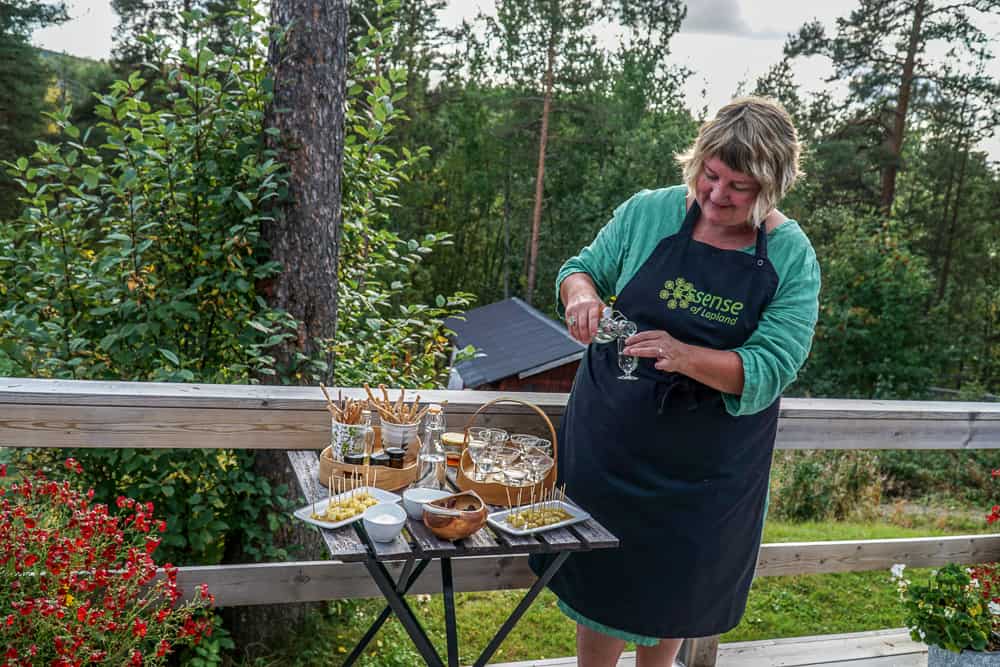 Eva pours a drink of birch sap on her terrace

We nibble on crispy homemade breadsticks served with a delicious dip of crème fraiche and pine shoot oil, reindeer sausage, and pieces of cheese drizzled with vegan honey made of dandelion syrup. 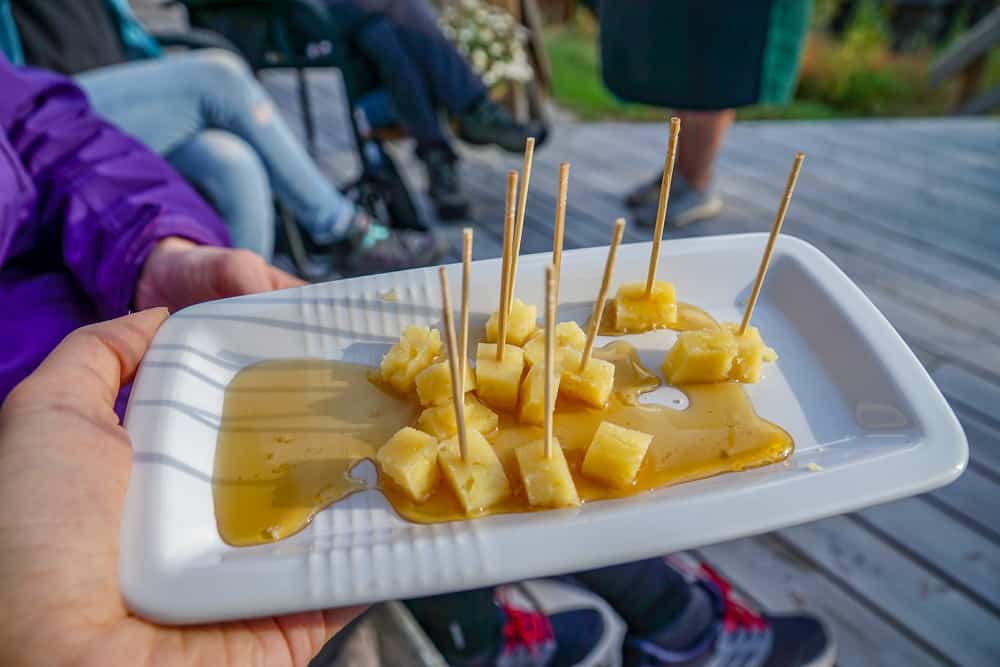 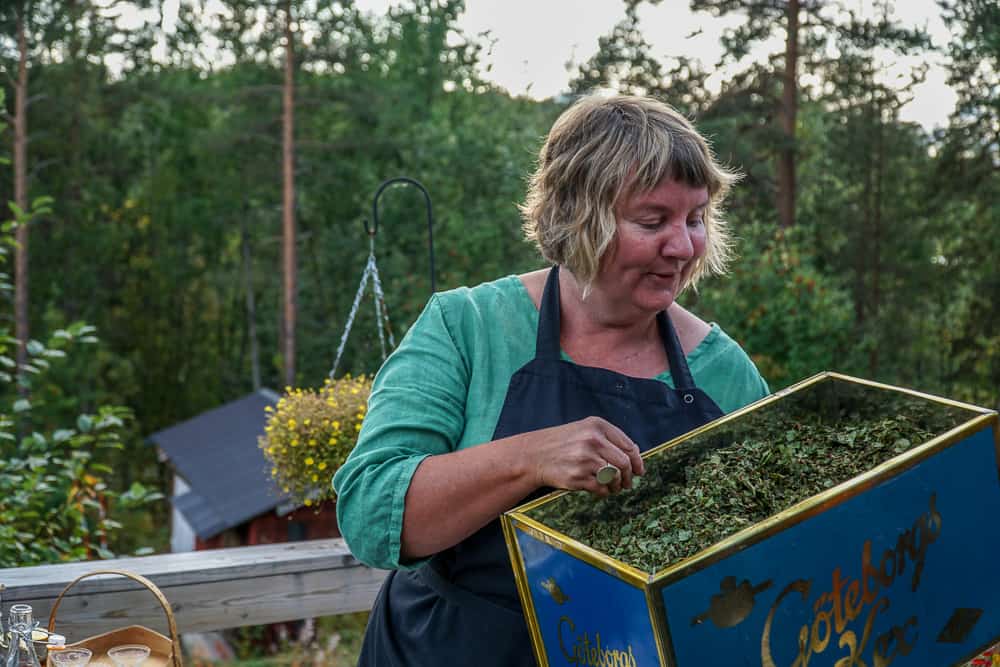 Eva tells us about her treasure trove of herbs and spices

Then, we find ourselves around a wooden table in the cozy kitchen of her lovely home, and it feels like I’ve just stepped into the kitchen of an old friend’s house on a beautiful summer day, and she is about to tell me excitedly about the berries she picked that morning.

Eva is talking of summertime in the Arctic and sharing fond memories of the mountains, “Summer is when you sleep when you’re tired and eat when you’re hungry and you don’t look at the clock.” I think of the summer I spent in Sweden, three years ago- a transformative summer that resulted in a deep sense of connection to the country- that I often have a hard time explaining to others, because it seems like no combination of words or phrases quite nails the feeling and the nostalgia that washes over me. One of the highlights was a visit to Skelleftea– packed with once-in-a-lifetime experiences, it served as my introduction to Swedish Lapland. It isn’t hard to understand why Eva fell in love with the region so much that she decided to make it her home. 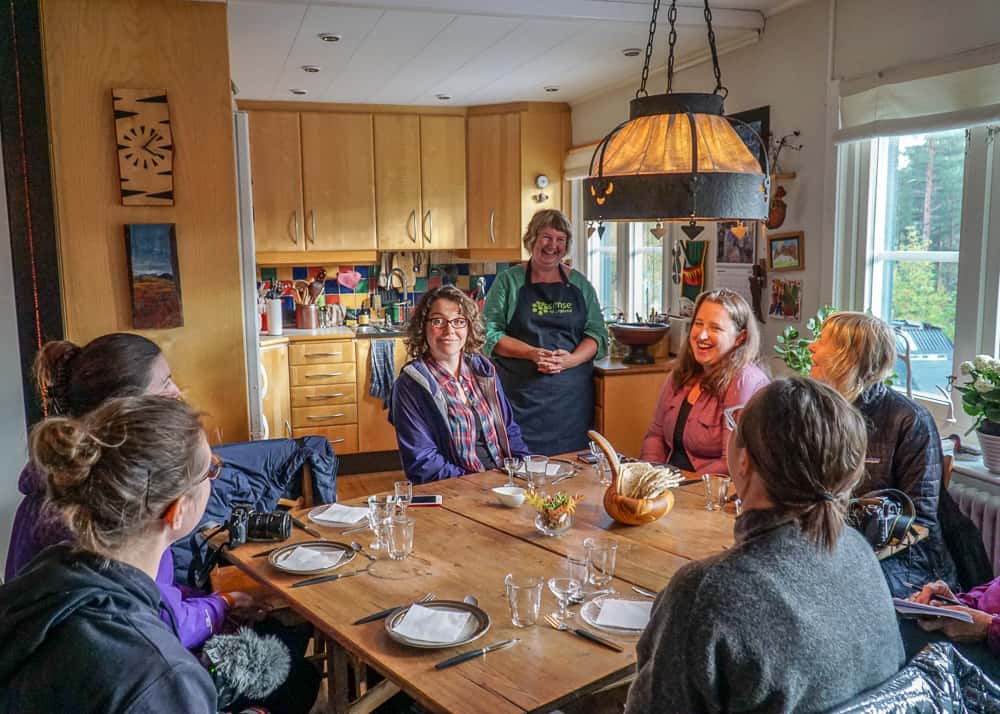 The group ready for lunch in Eva’s lovely home

Chatter fills the home as plates of salad and gáhkku, traditional Sami flatbread, appear on the table. Eva has a satisfied smile on her face as she cooks, carefully flipping filets of fish in a pan.

The voices fade and we enjoy our meal- perfectly cooked Arctic char topped with a dollop of sorrel sauce and a salad of fresh greens over the bread, not unlike an open sandwich. The flavors are light and delicious together- an ideal summertime lunch. 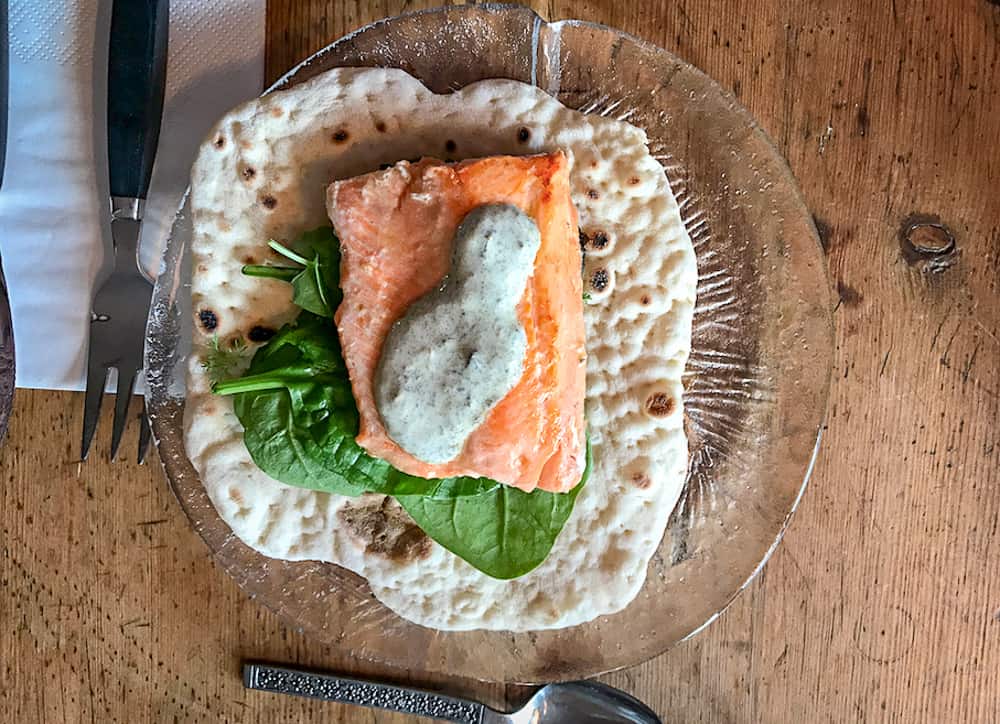 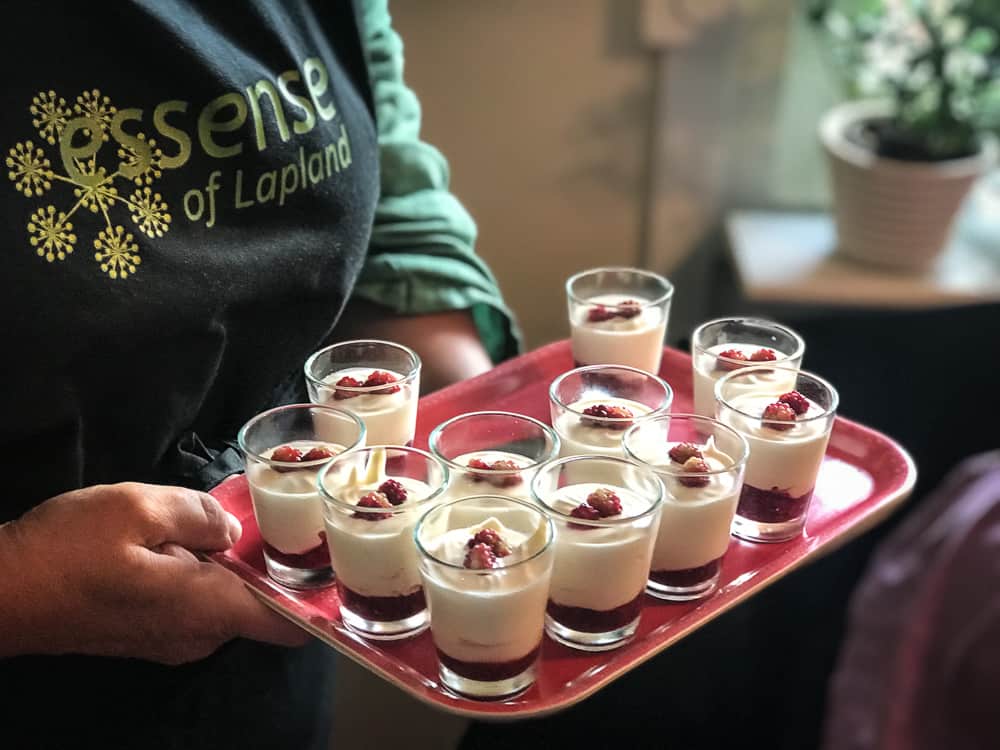 “Angelica is my herbal queen,” she says proudly as she holds up an angelica shoot- it is round and glorious, a true example of nature’s fantastical creations. From strengthening the immune system to being recognized as a cure for plague in medieval times, angelica, as Eva tells us, is one of her most treasured herbs, and also an ingredient in the tea she has just served us. 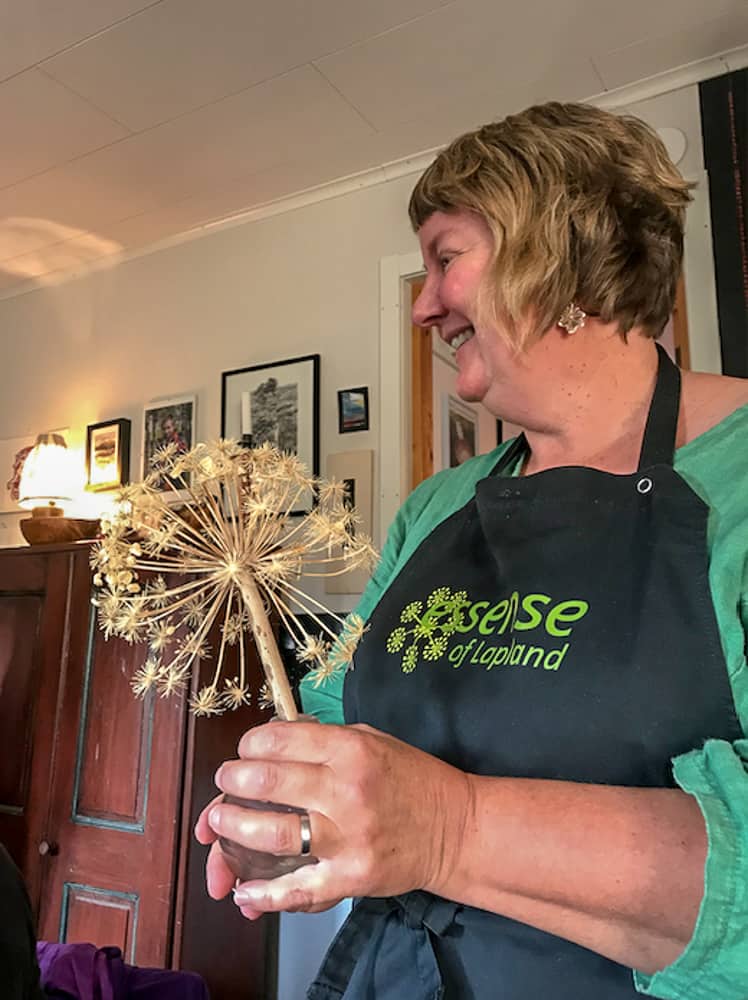 Eva shows us an Angelica flower

“My mission,” says Eva, “is to get people to understand that you don’t need to travel far away- you can travel close to home. Each year I learn a little more, about nature, about people, about culture. I was not born here so I look at it with special eyes but this is where I want to live always.”

Afterwards as we lick our dessert spoons clean of cloudberry parfait, she says that it’s time for another folk song about the contrasts of nature, “you need to close your eyes now, okay?” she smiles.

Her voice is soft and sweet at first, like a gentle breeze that blows upon a meadow of wildflowers. A few seconds later, I am standing on the edge of a cliff and the wind is getting stronger, commanding me to listen until I am in a state of complete surrender, seduced by its ability to sweep me away. Fearless and unfettered, it then drops to a mellow breeze again, twirling me around playfully.

I open my eyes to see a smile playing upon her lips. Her eyes are still shut. Eva is walking barefoot, somewhere among the wildflowers. 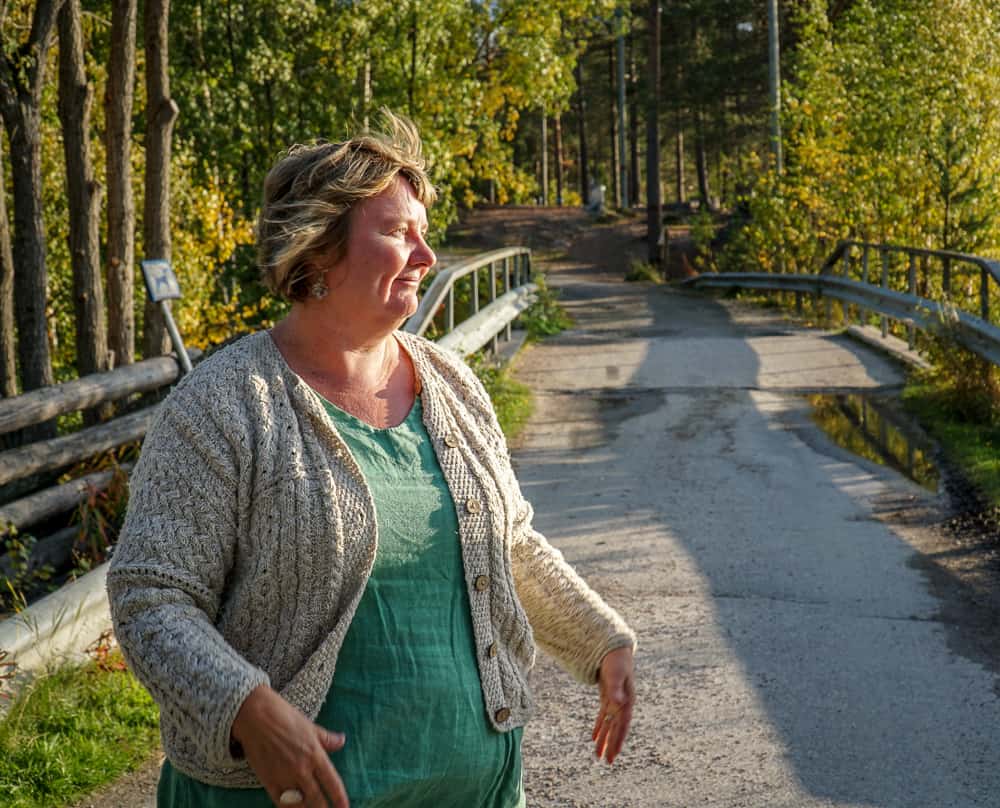 Eva Gunnare takes us on a walk around her home

Exploring Utö: The Island of Love

In the Heart of Nature in Skellefteå in Swedish Lapland 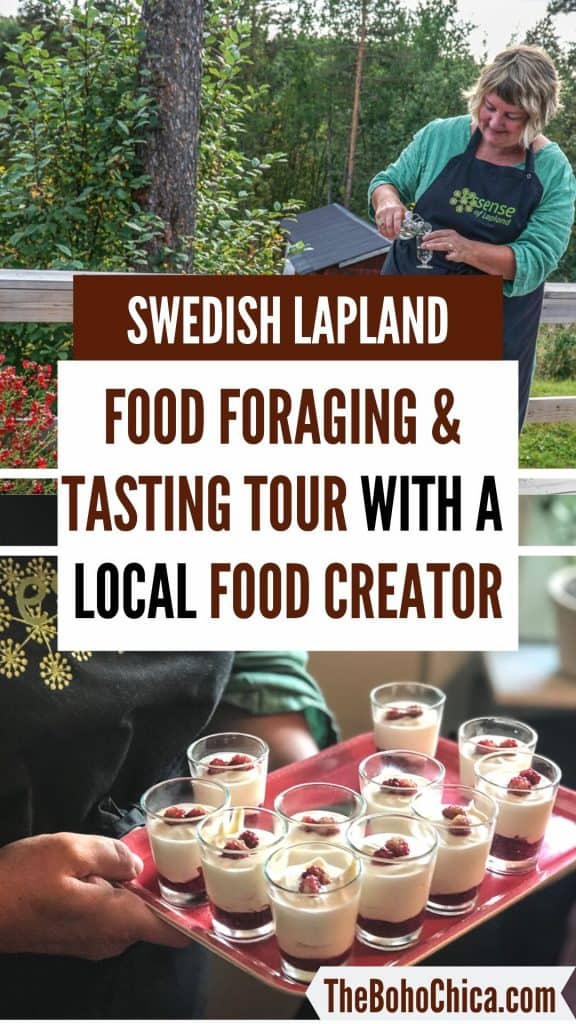 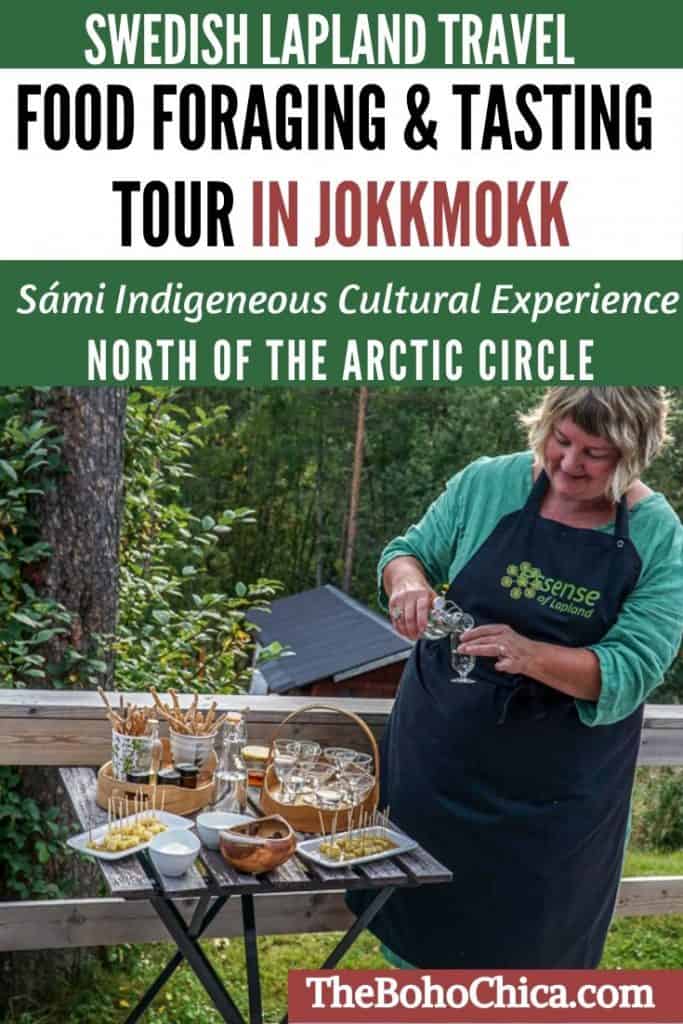 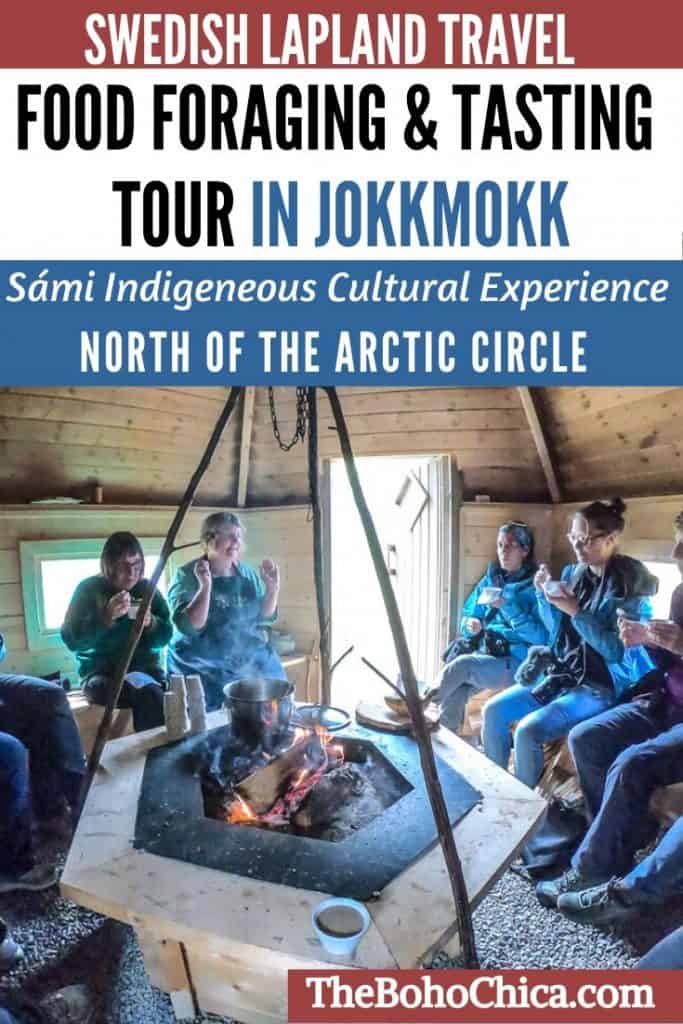