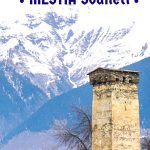 I wasn’t sure where the clouds of mist really hung; in the sleepy, cold town of Mestia in Svaneti, Georgia, a monochromatic dream sequence of white and gray on that April morning, or in my mind, battling the severe cold and the exhaustion of an overnight train journey from Tbilisi.

The marshrutka driver, kindly delivered me, trembling and pale, to the door of my guesthouse, then waited patiently for a few seconds after knocking on the locked door.

I rubbed my hands together furiously, and then thanked him; I’d figure it out. But he was having none of that. “Come,” he gestured, lifting my bag before I could, and walked around the house, to a little door that led to a common area. Indoors, warmth at last.

Loudly, he called out to no one in particular and soon enough a wavy-haired woman appeared, wearing a red t-shirt. “Come, come, breakfast?” said Lali, and I followed, a bit disoriented, after I’d waved goodbye to him. “Natasha,” I’d told her so she could find my booking, but she didn’t seem particular concerned with asking me any questions, only with laying out a lavish breakfast before me; bread, fruit preserve, cheese, eggs, butter, cake, khachapuri, and warm pie. I ate, quietly and hungrily and greedily and gratefully, feeling gratitude like I hadn’t felt in a while.

It’s amazing how indifferent we become to our privileges, how comfortable we become in our almost perfect lives, how ignorant of everyday kindness and human interaction, and how it takes a stranger’s kindness in some far-flung town to make us realize that the compassion of others enriches our lives in ways that no material happiness can.

I’d spend that morning in bed, beside a window view of ghostlike mountain silhouettes under gray skies, an oddly comforting backdrop for red-roofed and yellow-walled houses and old Svan towers peppered across green hills and emerald pine forests. When the rain would turn to a drizzle, I’d finally step out mid-afternoon, a folded map of the town and walking routes in the area, neatly tucked away in my jacket pocket.

I’d walk around to see two other tourists and a snowy town with an empty square and wet streets. I’d talk to a couple of curious, but friendly locals wondering what had brought an Indian girl to Mestia in less-than perfect weather. I’d relish a bowl of warm bean stew and the best hot chocolate I had in Georgia. I’d follow a couple of stray dogs up a trail through the village, until the path became so slippery that turning back was the only option.

And on that day, somewhere, underneath a gray, misty sky in Mestia, I’d find a bit of clarity, and that weight I’d been feeling on my shoulders for the past few months, would begin to feel lighter, only to disappear.

In the story of my life, mountains and trails have always offered answers, even when I couldn’t understand what the questions were. They’ve offered strength when I wasn’t brave enough to admit my weaknesses. God knows, I still struggle every day. The need to stay positive, to spread the message of positivity, means that I hardly ever talk about my battles with anxiety, something that seeps into everything else in my life; my work and relationships.

And, so I’d come to Svaneti, Georgia’s spectacular hiking region, to base myself in Mestia, the central town, hike (how I deal with anxiety), and to visit Ushguli, the highest inhabited village in Europe.

I visited Ushguli on five minutes’ notice when the owner of my guesthouse called to say she had found me a shared taxi that was leaving in five minutes to take the only road that had just been cleared up that morning.

In Upper Svaneti, I met some of the friendliest locals in Georgia, visited churches and sites around Mestia, hiked on trails in the area, and politely turned down a matronly matchmaker’s proposal to marry a handsome Svan man. Unsurprisingly, this was my favorite part of the country, one I’m determined to return to.

Things To Do in Svaneti Mestia

See The Svan Towers in Svaneti

Towering above meadows and fields where cows and horses graze, scattered all around Upper Svaneti in Georgia(a UNESCO Heritage Site) and in the town of Mestia, are ancient Svan towers built between the 9th and 12th centuries. These fortified towers, usually one for each household, were used by Svan families to protect themselves, their farms, and wealth from feuds and marauding armies, and also served as safe houses in what was a remote, rugged landscape with a harsh climate and the need to be self-sufficient.

The Svan community speaks its own language (Svan), has a distinct culture and history, separate from the rest of Georgia, of which it is immensely proud. While there are several misconceptions about the Svan people, especially among city dwellers, I found them to be warm, friendly, hospitable, and trusting. I highly recommend visiting the local Svaneti Museum of History & Ethnography in Mestia to learn about their history.

While many families have moved out of the towers and now live in houses right next to their ancestral Svan towers, some offer tours to visitors for a small, almost negligible fee. Seasonal income from tours and guesthouses has now become an additional and important source for many families, other than their original livelihood from farming and agriculture.

You’ll see several Svan towers while hiking in Svaneti, and also in the four villages that make up Ushguli. Many towers, in remote places, are abandoned and have interesting folklore attached to them.

Holding the distinction of being the highest inhabited village in Europe, at 2100m above sea level, Ushguli, made up of four villages (Zhibiani, Chvibiani, Chajashi, and Murqmeli) is home to Svan towers, stonehouses and guesthouses, and a chapel. About 90 families live here and during six months of winter, it’s completely cut off from the rest of the world, as the road to Mestia becomes impassable.

Its narrow lanes, even as late as April, are a slush of snow and dung, being happily stomped about on by cattle and curious tourists. Ushguli’s setting, at the foot of the Shkhara Glacier, is nothing short of spectacular and the 2.5-hour, 50km. journey, by 4WD on a dirt road that passes by towers and houses in remote valleys, is just as dramatic. Whether or not you decide to stay a night or two at a guesthouse in Ushguli (confirm availability and heating if visiting outside of summer), don’t leave Svaneti without visiting at least on a day trip.

While you could visit with a car and driver or hire a jeep to take you around, if you’re short on time, to really experience the beauty of Svaneti, Georgia’s main hiking region, spend a few days hiking around its spectacular landscapes. To hike, visit between May and October as roads and trails are still slippery and sometimes inaccessible due to the snow, even in late April. Here are some suggested itineraries to help you plan your hiking adventure in Svaneti. There are several trails that begin from Mestia in Svaneti.

How To Get To Svaneti

To get from Tbilisi to Mestia, Svaneti (and back), you have three options:

I decided to go from Tbilisi to Mestia with this option for my love of overnight trains and found that the train was clean, comfortable, and good value for money. I shared my compartment with three Georgians, an elderly woman and two young guys, all of whom didn’t speak any English. They were polite and helpful and did their best to help me, one of the guys kindly lifted my bag to place it outside the train as I got off, even as I insisted that I could.

I returned from Mestia to Tbilisi by martrushka and though the journey was shorter, it wasn’t as comfortable as the train journey. Not to mention that the toilets on the way were absolutely disgusting compared to the train.

Where To Stay in Svaneti

Most travelers base themselves in Mestia because a number of hikes begin here, plus it’s well connected to Tbilisi, Kutaisi, Batumi, Ushguli, and other towns in the area. You’ll also find a tourist office in Mestia city center and the helpful staff there can give you some great advice about hikes, weather, and road conditions.

There are several Mestia guesthouses and Mestia hotels, similar in quality, but based on my own research I chose Nino Ratiani’s Guesthouse, and was simply floored by the kindness and helpfulness of the staff and owner. From helping me plan my hikes, making sure I didn’t leave Mestia without visiting Ushguli (even with bad weather and on a budget when I didn’t want to hire a car all by myself), preparing an elaborate breakfast for me (even when I slept in and showed up post breakfast hours), arranging my return to Tbilisi by martrushka and asking the driver to save a good seat for me, to looking after me as if I were one of their own, it was the little things that will bring me back to this guesthouse whenever I’m back in Mestia.

It’s easy to get around either on foot, hiking, or ask your guesthouse to help you find a jeep/car and driver that you can hire for a day either by yourself or as a group, sharing with others in your guesthouse, to save on costs.

From Mestia, martrushkas run daily to Tbilisi, Kutaisi, and Zugdidi. Check with your guesthouse for schedules and bookings.

Want local tips and personalized advice for your Georgia trip? Connect with Levan from Go Ask A Local! He’s a local guide based in Tbilisi who works all over the country and offers trip planning consultations on Zoom.

Ultimate Guide to Tbilisi: Things to do, where to stay, eat, shop and practical information

Best Things to do in Batumi

Don’t Miss The Food in Georgia: What To Eat

Traveling Around Georgia as an Indian

Have you visited Mestia in Svaneti, Georgia? If so, how did you like it and what would you add to this list of things to do in Svaneti? If you’re planning a trip to Georgia, would you want to visit Svaneti?

If you can’t make it as far as Svaneti and still want to see mountains in Georgia, consider visiting Kazbegi.

Nice post that makes me want to visit Svaneti Georgia! Such beautiful photos you captured. Thanks for this great post detailing some great adventures. This place seems very nice I would like to visit this place.