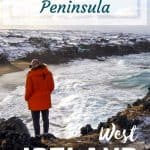 Don’t forget to watch my video of the Snaefellsnes Peninsula at the end of this post.

As Iceland, deservedly, enjoys its special moment in the tourism spotlight, visiting in summer means at some point you will be trying to arrive in certain places to beat the crowds. But my decision to travel to Iceland in winter meant there were days when I was lucky enough to have an arresting vista, a golden beach, an old lighthouse, or magnificent views of glaciers in Iceland all to myself, especially in places not on the South Coast such as the Snaefellsnes Peninsula in West Iceland.

While I didn’t arrive with a set-in-stone checklist of places I wanted to see in Iceland (because that’s not my style), I did know that I wanted to explore the Snaefellsnes Peninsula. It’s an easy daytrip from Reykjavík and my friend Ingo of Tröllaferðir – Troll Expeditions was kind enough to show me around his favorite spots and explore some new lesser-known ones.

Here are the highlights from one fantastic day that involved exploring the wildly beautiful landscapes of West Iceland, visiting the town featured in the movie The Secret Life of Walter Mitty and getting Ingo’s car stuck in the snow. After all, what’s an adventure without a little mishap or two?

Highlights of the Snaefellsnes Peninsula in West Iceland

The largest town in the Snaefellsnes Peninsula, Stykkishólmur, with its beautiful old chocolate-colored houses and a picturesque harbor, to me, felt more like a village (as did most towns in Iceland). This town featured in the Ben Stiller movie The Secret Life of Walter Mitty which happens to be one of my favorite travel movies.

A very unconventional-looking church with a modern white exterior, Stykkishólmskirkja was designed by architect Jon Haraldsson. Inside, hundreds of bulbs hang suspended from the ceiling- a detail that I imagine must create a stunning effect after sunset. The altarpiece is a painting of the Madonna and child created by artist Kristín Gunnlaugsdóttir.

We climbed up to this lighthouse for remarkable views over the bay of Breiðafjörður, with the Westfjords faintly visible in the distance.

Kirkjufell, or ‘Church Mountain’, is one of the most highly photographed spots in Iceland and if you’ve ever spent time researching travel in Iceland, you’ve probably seen a photo of it. This perfectly conical shaped mountain is backed by Kirkjufellsfoss, a small waterfall that plunges into a lake. I’ll have to return in the summer to be able to claim this- but I think a snow-white frozen waterfall looks even more spectacular than one that’s gushing with intensity. It’s almost like looking at time that has stood still, at least in my strange way of thinking about it.

The Snæfellsjökull National Park, home to the glacier Snæfellsjökull, is spread out over the westernmost tip of the Snaefellsnes peninsula and exploring this area takes one through rugged coastlines, volcanic landscapes and beautiful wild beaches.

At Öndverðarnes, gigantic waves crash into craggy charcoal cliffs and the golden beach of Skarðsvík. It was one of those places (and there were so many in Iceland) where I felt truly connected to nature. I could have easily spent another few hours just watching the waves break into the coastline, as if in a proud display of their full strength.

Djúpalónssandur is a black sand beach with oddly shaped rock formations, a craggy coastline and rusted metal remains from a wrecked fishing trawler in the late1940s. The drama is only heightened by white-fringed waves that leave behind feathery patterns on the shiny black sand and the lack of tourist crowds, at least in winter. A vertical column of rocks that rises up from the ocean is believed to be an elf church. On the beach are four lifting stones weighing from 23 to 154kgs that were used to test the strength of young men eager to join fishing crews.

No, I did not try to lift the lightest one.

At Lóndrangar, jagged pinnacle-like basalt cliffs, remains of a volcanic crater almost entirely eroded by the sea, rise up along the coast to greet crashing waves. The hill is said to belong to elves and the two formations, 75 meters and 60 meters in height, are believed to be used by them as a church and library. Another piece of folklore associated with the area is that the two geological formations are actually the troll Bárðr and a shipwreck. Lóndrangar is also a nesting spot for a few different bird species.

Lóndrangar was our last stop for the day before we made our way back to Reykjavík. We visited these places in winter over an entire day (about 8 hours), not rushing and taking our time to explore and enjoy every stop. If you’re planning a trip to Iceland, check out my post on why I think it’s a good idea to visit Iceland in winter.

Want local tips and personalized advice for your trip to Iceland? Connect with Halldór from Go Ask A Local!  He’s an Iceland-based travel agent who specializes in self-drive trips and also offers trip planning consultations on Zoom.

Here are more posts to help plan your Iceland trip, from my Iceland Travel Blog:

Ultimate Guide to Reykjavik for First-Timers

Things to Know About Iceland in Winter

Where to Eat in Reykjavik on a Budget

Two-Day Trip to the South Coast of Iceland

Exploring the Icelandic Highlands at Landmannalaugar

Inside a Lava Cave in Iceland

16 Things Everyone Learns Traveling in Iceland

The place is so beautiful, its so cold in the eyes especially when i feel the summer here in Thailand. hehe. I wonder how cold the beaches there, they look like freezing

Oh Iceland, I can't wait to fall in love with you. I'm ready to be captivated by its otherworldly charm. Love the photos you got!

I haven't visited Iceland yet, but I live in the neighboring country (Norway). I would love to visit there someday both in the winter time and summer. This guide will come in handy for sure! ;)

Thanks for the comment Criz! I would love to visit Norway someday soon myself, another fascinating country.

I've never been to Iceland but it's higher and higher on my list! It just looks so stunning!

It was pretty incredible :)

Yes I've visited, but it was in winter like you though the weather wasn't so good and it was pretty much a white out! So thanks for showing me what I missed actually seeing :-) Love the elvish folklore that surrounds so much of the Icelandic landscape, it would be bonkers anywhere else in the world but just feels so right here!

Yes it's funny how much sense it makes when you're actually in Iceland listening to the stories :)