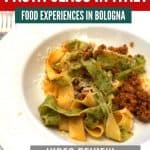 Don’t forget to watch the short video of the class at the end of this post.

I’d been wrong about pasta all along.

Spoilt by the easy choice to take home packets of Barilla’s whole-wheat penne only to cook it in a sauce that was also bought at my neighborhood supermarket, I had always thought of pasta as a quick-to-prepare meal that wasn’t just hugely satisfying but was also well suited to my limited culinary abilities.

While I still believe the latter to be true, after taking a cooking class in Italy, I’m now enlightened about the ‘quick-to-prepare’ part, having had the chance to learn firsthand at a pasta-making lesson in Italy. I’ve now emerged from the experience with a real appreciation for the labor of love that making fresh pasta really is and the tradition of taking time with both the preparation and consumption of meals, things that are never meant to be rushed in the Italian way of life.

I learnt from many conversations that on Sundays, Italian mothers can spend as long as four to five hours in the kitchen, preparing an elaborate multi-course meal for the whole family. Why? Because nothing says love like a heartwarming meal lovingly prepared by an Italian woman.

What It’s Like to Take a Cooking Class in Italy

As I experienced at the Il Salotto di Penelope Cooking School in Bologna, there is nothing instant about preparing a simple dish of pasta; from the thorough kneading of the dough and patiently rolling it out until the texture is just right to stuffing it with ricotta and preparing a delicious sauce. At their cooking school in Bologna, friends Barbara Zaccagni and Valeria Hensemberger teach eager food enthusiasts about the fine art of making pasta while peppering the lesson with stories and dispelling common myths about Italian cuisine.

“Never with spaghetti,” Valeria says while talking about ragu commonly mistaken as ‘Bolognese’ and paired with spaghetti. “The best wedding is with tagliatelle or gnocchi, but never with the dry pasta. And ragu is not meatballs. And ragu don’t swim in the tomato sauce,” she adds, nodding emphatically.

“No ketchup in the meat sauce,” she says, setting the tone of our session with a dash of humor. “Spaghetti Bolognese does not exist.” Who knew that Spaghetti Bolognese was an Italian culinary myth? I bet chefs in Bologna have the last laugh as tourists show up at restaurants and order the dish.

We begin by swirling two fingers on the wooden board to make a crater in the center of the mound of dough, pour eggs into it, and mix with forks until Valeria comes around to check and approve the consistency. Then it’s time to use our hands. To knead the dough, I persevere with all of my forearm strength but Barbara still has to take over to get it right.

She brings out the rolling pins and someone jokes about how they’re the perfect tools to accompany the chiding of mischievous children. She demonstrates how to roll the pasta correctly and we follow suit, rolling out random country-shaped maps of pasta.

Later, we gather around them to finish the easiest and most fun exercise in the cooking demonstration, rolling the pieces of pasta into legit pasta shapes. Tagliatella, bow-tie, and tortelloni sound just as great as they taste.

We spoon in a mixture of ricotta, Parmesan, and parsley into each tortelloni, and fold it into a neat little package, only minutes away from its rightful place deep in our bellies. Barbara picks up the tagliatelle and conjures them into nests with the swiftness and grace of an artist.

When asked what motivated them to set up the school, Barbara answers, “The culture of food is an important part of the general culture of our country. And we love to transmit this knowledge to others.”

The sauces cook as we sit at the table pouring wine to celebrate the fruits of our labor and talk about our favorite pasta shapes. Almost no one picks the one that we rolled between our palms, strozzapretti– the name means to strangle a priest, refers to the rolling action, and developed as a result of historically strained relations of the region with the church.

Valeria and Barbara carefully place each dish on the plates and bring them around, one by one. We taste, at first slowly allowing the flavors to blossom in our mouths. In between mouthfuls, we choose and announce our favorites; the tortelloni for how the goodness of the ricotta bursts out of the dough with the first bite and the tagliatelle for how it perfectly scoops up the ragu in its folds as we twirl it around our forks.

Visiting Rome? Here’s the perfect 2-day Rome itinerary and you can also take a pasta-making class in Rome.

Looking for more bucket-list-worthy experiences in Europe? Here’s an extensive Europe bucket list to give you some ideas.

After a lot of lingering and some wine, it’s time to say our thanks and goodbyes. We leave with full stomachs, happy hearts, and a new appreciation for pasta, perhaps Italy’s most famous culinary superstar that is available in cities and towns across the world but tastes best in its home turf and Italy’s culinary capital of Bologna.

I visited the Il Salotto di Penelope Cooking School in Bologna as a guest of Emilia Romagna Tourism through my participation in Blogville Italy 2016. A big thanks to them for hosting me for the duration of the program and for helping me write the kind of stories I love to create. All opinions are my own.

Divya: Gone With A Whim

OMG I love this post and the pasta looks absolutely delicious. When I visit Bologna, I'll be sure to do this. When I visited the Amalfi Coast, I did a similar class at an agrotourismo and it was an amazing experience. Thanks for sharing :)

I would love to take a pasta cooking class in Italy. Cooking classes are such a wonderful way to learn more about a country your visiting and bring home your new skills to share with your friends and family.

Woah! Four to five hours to make pasta? That's passion right there! Every single one of the dishes looked amazing, and so much better than dollar pasta from the store. Thanks for sharing!

A pasta-making class in Italy? What a dream! It looks difficult but delicious! Thanks for sharing your experiences!

I think it would be so cool to take a cooking class in Italy! The tortelloni looked delicious and I'd love to be able to make it from scratch! I like that the women also dispelled common Italian myths while they cooked. A great way to learn!