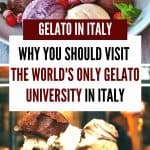 Flashback to the time when I was spending a huge amount of money on my Masters degree- if only I’d known then that there was a field of study that involved creating perfect swirls of luscious gelato in flavors so unusual they can blow people’s minds from a feeling that couldn’t be more different from brain-freeze.

But it’s never too late, so, when I got the opportunity during my recent travels to Italy with Blogville, to go to Gelato school, even if for a day, I grabbed it with both hands like a massive waffle cone topped with scoops of creamy ricotta, tiramisu, and dark chocolate gelato. I’ve just let you in on what my dessert fantasies look like, you’re welcome.

Given Italy’s love for food, perfection, and the two hand-in-hand, it’s no surprise that it’s home to the world’s only university dedicated to the study of the quintessential Italian dessert-Gelato. Located in Emilia Romagna, the food-loving heart of Italy, and with satellite campuses around the world, the Carpigiani Gelato University serves as ground zero for gelato makers and entrepreneurs who want to master their craft with the support of a comprehensive program, the latest techniques, and an international faculty.

So how long does it take to become a gelatiere, and what kind of a career background do most students have before they enroll at the university?

I was quite surprised to learn that not all students who enroll come from a culinary background- many have decided to change careers. Students come from all over the world and most want to set up shop in countries other than Italy, considering how saturated the gelato business is there. Try walking down any city street in Italy and you’ll see a gelato shop every seven to ten minutes (at least). The four-week Become a Gelatiere program is intensive- teaching students how to perfect the artisan gelato using healthy methods and the right hygiene protocol and ends with an internship in a gelato store.

Carpigiani has been working to promote the gelato culture by organizing the Gelato World Tour that tours across major cities each year and awards gelato artisans for the title of the “World’s Best Gelato”. Academic collaborations with culinary institutions around the world are common.

During my visit, I got to tour the university and Gelato Museum, and learn about the history of gelato and fun facts that I had no idea about. I also learnt how to make a simple fresh fruit sorbet.

If you’ve ever reveled in the comfort of a creamy gelato on a warm and sunny summer afternoon, here are some things you really should know about- the first and most important being: Never, never call it ‘Ice-cream’!

Things I Bet You Didn’t Know About Real Gelato

Gelato is healthier than ice-cream

Gelato has between 0-8% butterfat versus 10-18% in ice-cream. Gelato is churned at lower speeds than ice-cream and has on an average 50% less air resulting in a creamy and smooth texture and more intense flavor per spoonful. It’s served at 5-10°F versus 0-5°F for ice-cream. That means that your taste buds are more alive when you’re enjoying a gelato.

But it is not ice-cream and must be referred to by its correct name. The FDA defines ice-cream as a frozen product with at least 10% butterfat. Since that is significantly lower in gelato, to call it by the same name is ignorant.

Gelato is an artisanal and all-natural product

Gelato has none of that preservatives stuff you’ll find in mass-produced ice-cream sold in supermarkets. Only fresh and natural ingredients such as fruits, milk, eggs, cream, cocoa, and nuts are used while making real gelato.

Gelato is an artisanal product- which means it’s made in small quantities to maintain its high quality. Hence, gelato isn’t sold at supermarkets with several months’ expiration date. All gelato shops make their own fresh gelato every day.

The alternative for the lactose intolerant

Gelato that uses water instead of milk is called Sorbetto and uses fresh fruit as the main ingredient.

In the 11th century, the Arabs learnt from the Chinese to combine shrb, a sugar syrup for fruit sorbets and snow. Shrb found its way to Sicily and the sorbetto was born, made of sugar, fruit juices, and snow.

The first known recipe of gelato using milk and eggs comes from the 16th century and most stories credit Bernardo Buontalenti, a Florence native whose many talents included architecture and military engineering, with having made the recipe to impress the court of Caterina Dei Medici. His recipe consisted of ice, salt, lemon, sugar, eggs, honey, milk and wine.

At first only served in royal courts and in monasteries to distinguished guests and nobility, the gelato was made accessible to the public when Sicilian Francesco Procopio Cutò opened his Café Le Procope in Paris in 1686 and started selling it to the public. The restaurant still stands in Paris and is the oldest restaurant in the city. I guess it’s safe to say that we ought to thank him for bringing this delicacy to commoners like us.

Carpigiani was the innovator of modern gelato machines

Bruto Carpigiani (1903-1945) was an engineer and innovator who built a new gelato machine that was a big improvement over other machines being used at the time. It was available on the market only a few months before his demise in 1945, after which his brother Poerio founded Carpigiani in the 1960s that is now the world’s top producer of artisanal gelato machines.

At the Carpigiani Gelato Museum, you can take an interactive tour to learn about the history and evolution of gelato, production technology over the years, and learn how gelato is made and consumed today. Gelato workshops of various durations are available for families, groups, and corporate team-building events.

I visited the Carpigiani Gelato University and Gelato Museum as a guest of Emilia Romagna Tourism through my participation in Blogville Italy 2016. All opinions are my own.

You can book a guided tour, attend a gelato workshop and also visit them on Facebook.

Have you tried gelato in Italy? Where was the best gelato you ever tasted?

OMG, I thought, gelato is ingredient to make ice-cream??

Quite a revelation, isn't it?

thank you that you are sharing very helpful and wonderful!

Oh my goodness: I had absolutely NO idea about this at all- I thought gelato was just a fancy name for ice cream!

Happy to have spread some gelato awareness!

A whole freaking gelato university? Well that sounds delicious! What a cool idea so that the product is done right. I haven't met a gelato that I didn't like yet but my favorite country for enjoying gelato has surprisingly been the Dominican Republic, not Italy.

This sounds like so much fun!! I had no idea that there was a Gelato University and Museum in Bologna--I would have totally checked this out when we were there last year! Looks like a tasty experience and I always love learning how things are made. Hopefully we can head back to check it out sometime!