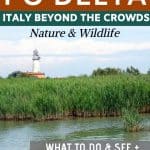 I knew I liked Antonio Romagnoli as soon as I’d heard him greet us with an energetic ‘Ciao!’ “Don’t worry,” he said for the third time in the five minutes since we’d met at the Ferrara train station to begin our tour of the Po Delta nature reserve. He picked up our bags with a steady, swift motion, two in each hand. We followed him to the military green Delta Adventures 4×4 to begin our intrepid exploration of this lesser-known region of Italy.

Located in Emilia Romagna between the provinces of Ferrara and Ravenna, the Po Delta Park, formed by Italy’s largest river Po, is an important natural habitat for a broad and diverse range of species of animals, fish, and aquatic birds. Spread out over 52,000 hectares and consisting of wetlands, fertile and cultivable land, forests, islands, lagoons, swamps, and marshes, it was awarded World Heritage status by UNESCO, along with the culturally significant city of Ferrara. The wetlands are one of the most important in Europe for their richness in biodiversity.

Far from the mass tourism circuit, the area is visited by avid birdwatchers, naturalists, biologists, wildlife and nature photographers, and nature-lovers in the know. Before I’d begun to do my own research on the places I wanted to explore within Emilia Romagna, I’d never heard of the Po Delta. After all, few places in Italy get as much attention as Florence, Milan, Venice, Rome, Cinque Terre, and the wine region of Tuscany.

“I’m a little bit different,” said Antonio when I asked about what had brought him to work and lead excursions at the Po Delta. “Some people would say, I’m not normal,” he smiled mysteriously, eyes focused on the road. I glanced at him. Satisfied by my heightened curiosity he continued, “I used to work as a fashion photographer in Milan. Then I began to feel I can’t do this anymore. I need to do something different.”

His passion for the incredible nature of the Po Delta and keen interest in bird watching led him to become something of an expert in the bird species and general flora and fauna of the region. He studied, documented and photographed them, eventually wrote a book about them and began to lead seminars and workshops in schools. Through his project Delta Adventures, he hopes to show interested travelers the striking natural beauty of a part of Italy that most international tourists aren’t even aware of. And you know what’s better than seeing extraordinary places? Seeing them with someone whose passion for them shines through in every conversation.

A Boat Ride through the Delta

Fast-forward a few hours and after a delicious lunch of seafood pasta, we were standing outside the house of fisherman, Luccio Cazzola, who would take us deep into the delta on his boat. With white hair and sunburnt skin, both gifts of the lifetime he’d spent in these parts, Luccio looked like he knew the Po Delta like the back of his hand. His wife waved from the balcony as Antonio carried a picnic box from the porch.

Ten minutes later, I was walking along the water at Gorino port. The blue of the sky reflected perfectly in the glassy river framed by bright green reeds. Big and small fishing boats gently bobbed along the wooden walkways. “Look,” Antonio pointed to a heap of pearly black shells on one of the boats. Luccio explained that each day 1200 fishermen caught 40kgs each of mussels and sold them all over the country. Fishing and aquaculture are not just means of livelihood in the Po Delta; they’re deeply intertwined in the heritage and culture of the region.

Then, we were on Luccio’s boat leaving behind Gorino and its boats to move into the quietness of the delta. We sailed past fishing nets tied onto stilts and islets of reed, into narrow channels, with only the birds of the delta for company; herons, ducks, gulls, and terns, calmly perched onto stilts and taking flight just as the right photo opportunity arose, as if on cue. In the solitude of the lagoon Sacca di Goro, the notion of time seemed like the blurry white trail of foam on the river by the side of the boat; clear for a few seconds before it disappeared into the gentle rippled surface.

Traveling around Italy? Here are some travel tips for Pisa.

The Island of Love

We stepped off the boat on Isola dell’Amore (Italian for the ‘Island of love’), an island on the mouth of the river where it flows into the Adriatic Sea. The name comes from a time when lovers from villages in the area came here on little boats in search of privacy. The Faro di Goro lighthouse, built in 1950, stands here looking to the Adriatic, which carries driftwood and twigs and throws them on the beach along with plastic trash left behind by day-trippers. I wondered about the makeshift shelters, “Do people camp here?” “Sometimes in summer, people come for a picnic and stay,” said Antonio.

A Picnic at the Old Lighthouse

After a short ride on the delta, we were disembarking again, this time to climb up to Lanterna Vecchia, an old lighthouse built in 1846. The tower offered a fantastic panoramic view of the Po di Goro section of the delta. I’d taken all the photos I needed; for a few precious minutes, I enjoyed looking at the landscape through my own eyes.

Antonio and Luccio set up a wooden table in the center of the observatory and Luccio brought out the picnic prepared by his wife. On a white tray, he laid out pieces of bread, carefully topping each one with a spoonful of pickled sardines from a glass jar. I’ve always been hesitant about sardines; even after sampling them several times, I can’t quite decide whether or not I like them. But I picked up a piece of bread when Luccio offered and popped it into my mouth. Then another. The marriage of flavors was like a match made in heaven; the saltiness of the sardines, tanginess of the pickle, simplicity of bread baked in an Italian kitchen, and the unparalleled hospitality of Italian hosts.

Then we were back on the river admiring the magnificent landscape one last time before it was time to thank Luccio and say goodbye.

Antonio had mentioned a mini safari more than once. I’d never been on a safari. Not once. I was both excited and curious about the wildlife in the Po Delta. Luckily, I didn’t have to wait for too long. After a while of driving south, we got off the main road. Suddenly Antonio looked focused, his eyes scanning the landscape as his 4×4 easily navigated the overgrown terrain and shallow ponds. Then he slowed down and pointed to a herd of Camargue horses playing in a marsh. Unaffected by our presence, they continued to play, until they grew restless and the herd cleared. Over the next hour, we spotted white swans, black bulls, gulls, herons, sparrows, and egrets.

In their natural habitat, they paid little attention to us. The delta was their home, a place between land and sea where human intervention hadn’t destroyed nature’s imprint on the environment. A place where it all co-existed in beautiful harmony.

The next morning Antonio looked excited as we got into his jeep. “I hope we can make it in time to see the flamingoes.” We rolled down the windows, breathed in the fresh air of the Po Delta, and daydreamed of long-legged pink birds. Soon, we were on our knees, peeping through a wooden frame at flocks of flamingoes, their heads impossibly stretched below the surface of the lagoon.

Did you know a flock of flamingoes is also called a flamboyance?

Was the Po Delta nature’s very own show of flamboyance?

Perhaps. But this is what I came away with.

The sunshine on my face as we sailed between beds of reed, the sight of herons taking flight, the fierce wind in my hair on the edge of Isola dell’Amore, the fiery flavors of pickled sardines, the grains of sand that stuck to my fingers as I stole a shell from the beach, the splash made by the hooves of a white Camargue horse, the confronting stare of a black bull, the still perfection of pink flamingoes, and the many smiles of my companions in a place that made me feel like a child who had stepped out of home for the first time right into nature’s sweet embrace.

Tip: If you want to explore the Po Delta, public transportation is not an option. You could rent your own vehicle but in my opinion, the best way to see it is with Delta Adventures. We stayed at the Airone Bianco Residence Village in comfortable bungalows.

I visited the Po Delta with Delta Adventures as a guest of Emilia Romagna Tourism through my participation in Blogville Italy 2016.  Big thanks to them and Antonio for showing me around. All opinions are my own.

I've never heard of this place and I love that you show places in Italy that are a bit off the beaten path or at least not that popular with tourists. This place looks amazing, though I was really surprised it was in Italy when looking at the photos. The more I read about Emilia Romagna the more interested I get to visit. The flamingo lagoon caught my eye!

I missed this when I was in Italy - boo! The delta looks amazing and you definitely got some beautiful photos to capture all that beauty!

It looks lovely and green and a great spot to get away. I like the name of the island too. I was amazed to see those horses walking in the marsh. Are they wild horses? I'd love to know how they came to be in this region.

I've never heard of the Po Delta either. Such a wild place in Emilia Romagna. Italy has so many treasures, and it looks like this is yet another one I need to visit.

I lived in in Bolonga for a few months about 20 years ago. Never in my wildest thoughts would have have imagined that the Po Delta had so much to offer and was such an important part of Italy/Europe. If I am ever back that way I will definitely be paying Po Delta a visit.