“Hey, where is everyone?” asked Ankit as I focused on the names carved into the stone wall, trying to get a good photo. Here we were in an underground city that felt like another world and some idiot actually thought of tainting the walls with the sorry evidence of his undying love?  “Natasha, they’ve left,” the anxiety in his voice finally made me turn around with a little irritation. I hate being rushed; the details I like to notice take time and patience is an important prerequisite. But he was right; we were alone and we couldn’t even hear the sound of footsteps or muffled voices anymore. Shit.

We were standing on God-knew-which level of the Kaymakli Underground City in Cappadocia. Turkey’s underground cities were built as early as 2000BC and used by local communities over the centuries as a safe refuge from conquering armies and invaders. The network of inter-connected cities was elaborate and well planned with interconnecting tunnels providing a strategic escape in case one city was under attack. 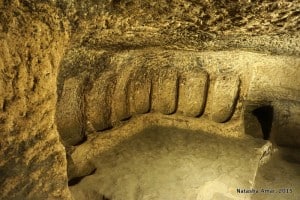 The widest of these, Kaymakli is a confusing network of narrow tunnels and low-roofed cave rooms. These were used as living quarters, storage rooms, kitchens and wineries. There’s also a church, burial chamber and a stable. The need to crouch through the tunnels meant that heavily armored invaders couldn’t enter them.

We’d somehow lost the rest of our tour group; I’d stayed a few minutes longer in the chamber with the names etched into the walls and Ankit had waited for me thinking the group couldn’t possibly venture too far away. But he was wrong; Kaymakli was a maze of tunnels spread over eight levels, of which only four are open to visitors and we didn’t even remember which one we were on. There must be signs somewhere; we can’t be the only ones who’ve lost our way. We’d been told that invaders who entered these subterranean tunnels would often get lost in them, which is why they were hugely avoided in the first place. It made perfect sense.

The floor we were on was unusually quiet; the only other tour group we’d seen didn’t seem to be around either. We had to find our group quickly. I hurried through a corridor and turned right quickly following my instinct, all the while looking for a sign somewhere on the walls. “This way”, I called out to him hoping I was right. We came to a narrow flight of stone steps leading to a higher floor. At least we weren’t going deeper into the city. I recognized the storage chambers, our guide had explained that they were used to store vegetables and grains by the people who lived in the city for several months at a time.

Then I saw the arrows on the wall- some blue and others red. Of course, we had no idea what they meant but we followed the blue ones anyway. After ten minutes, we found another set of narrow steps to a higher level. Once there, we were relieved to hear voices. Peeking into the different chambers, we tried to follow them, hoping our tour leader would realize we weren’t with the group.

“Guys, this way,” he called out behind us. We turned around to find him alone, “I came back to look for you, where were you guys?”

At least we weren’t going to be spending the night in Kaymakli.

The construction of underground cities is believed to have been first carried out by the Hittites around 1200BC with subsequent digging into deeper levels by the other people who lived in the area after them.

The cities have been largely used to hide from marauding armies over the ages, from the Roman persecution of Christians in the 2nd century to Arab invaders in the 8th century. Thousands of people lived in the cities, which were easily accessible from their hometowns on the surface, for several months at a time. When they’d hear that their village was taken, they would escape through the tunnels and surface into another town far away.

A tunnel connects Kaymakli to Derinkuyu, the deepest of the underground cities explored in Cappadocia so far.

I was in Kaymakli last week. Thought it was a piece of cake... Thought WRONG!!! Some passageways are less than 2' wide and we had to squat-walk to get to the other side. Which was filled with lots of people. It was cold, dark, humid, and using a mask made it worse. When we wanted to get out of the claustrophobic cell, someone on the other side decided to come through without waiting for the rest of us to come out first... and then neither party wanted to squat-walk backwards!

I can't imagine getting in lost in these caves. That would be a perfect nightmare. I travelled alone too, and would not go into these caves again. It was an experience tho, even if you're claustrophobic, it's a once-in-a-lifetime thing to do :)

We loved Turkey so much! I want to go back and explore more with the kids. I think this cool underground city was the highlight for them. And cool is the right word for it!

it was also the highlight for us in the region!

Cappadocia sure looks like an amazing place.. your pictures have given a virtual tour.. and it sure is nothing like anything I have seen so far....

That looks like an amazing place to visit. I like to take my time too...I can totally relate!!

Wow, I had no idea about this side of Cappadocia