On our second evening in Istanbul, after walking the distance from Eminonu Harbor and getting lost in the lanes in Sirkeci, we finally found ourselves at the Hodjapasha Cultural Centre, a tastefully converted traditional hammam that was built in the 15th century. I was very keen to attend the Mevlevi Sema Ceremony or the Dance of the Whirling Dervishes in Istanbul, though I’d heard the popular opinion of it being ‘for tourists’. I detest such labels and usually dismiss them, instead choosing to experience everything that sounds appealing to me.

Seated in the front row of the small theater, I noted the instructions beamed out on the walls requesting the audience not to applaud, as the ceremony was a religious one and not one meant to entertain. As the lights dimmed and an almost mystical bluish hue descended upon the theater, a small orchestra of musicians began playing traditional instruments, filling the air with captivating Sufi music.

Cloaked in black, one by one the dervishes stepped onto the circular stage, heads bowed and prayer on their lips. Then they knelt down in obeisance, before getting up again to take measured steps as they bowed to each other in greeting. The audience watched in silence, perhaps captivated by the calmness that had engulfed the theater.

Free of their cloaks, one by one the dervishes slowly moved into position, taking small graceful steps. With tranquil faces, in their white robes, the dervishes appeared to have surrendered themselves to their devotion. At first gentle, the spinning became much faster as their arms slowly rose and their robes whirled and fanned out around them, almost like white clouds.

Their bowed heads and eyes that were neither open nor shut seemed to convey that they had transcended into a trance-like state, perhaps another plane of consciousness. Watching their bodies whirl, as they spun around counterclockwise, I wished I could experience what they were experiencing; a state of complete submission to something. I don’t think I took my eyes off them even for a single moment. I felt a strange (but positive) vibe that’s hard to describe but one that gives me goosebumps every time I think about it. 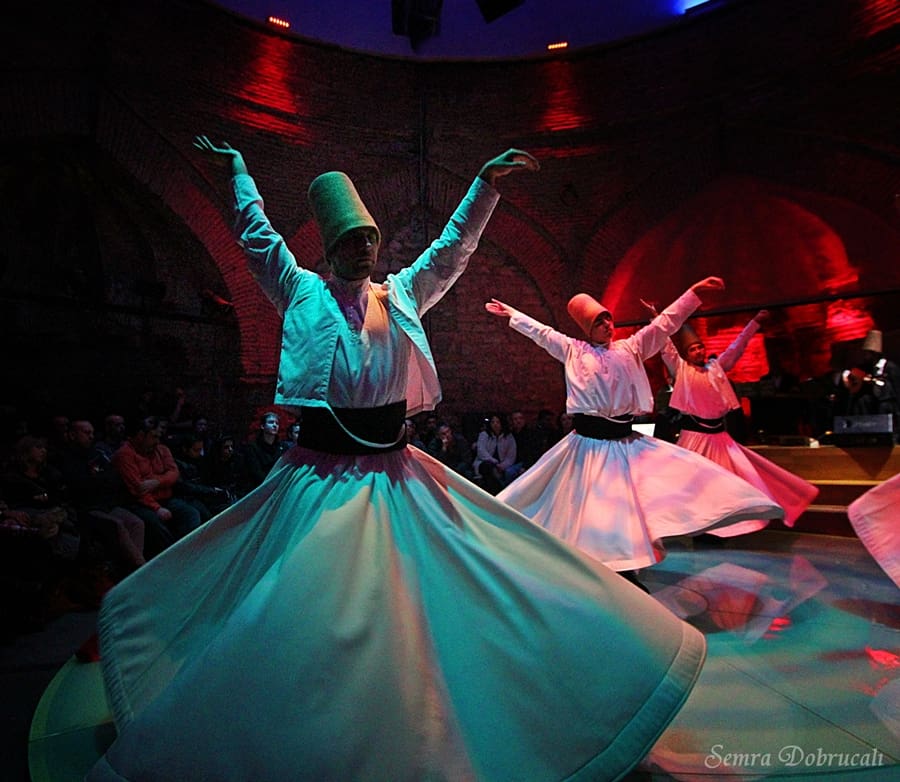 Crossing his arms in front of him, he represents the number one to symbolize God’s unity. As he whirls in a state of submission to God, his right hand faces the skies ready to receive the beneficence of God and his left hand is turned towards the earth so he can bestow God’s spiritual gift upon people.

The Sema or whirling consists of four salutes, each signifying a stage in the transformative journey undertaken by the dervish as he unites with God.

Sufism and the Mevlevi Order

The Mevlevi Sufi order was founded in 1273 in Konya, Anatolia in Turkey by the followers of Rumi, a great spiritual leader and poet. The brotherhood is built on the principles of love, tolerance and giving up one’s existence and ego to unite with God. Sufism is regarded as a mystical school of thought in Islam whose literary productions achieved prominence during the medieval period of Islamic history.

The Mevlevi were a distinguished Sufi order in the Ottoman Empire, serving in important official positions and having produced brilliant poets, philosophers and musicians. After having outlawed the brotherhood due to the secular revolution in 1923, the Turkish government began allowing the ceremonies to be performed publicly in the 1950s in Konya annually. In 1990s, regulation was further eased and in 2005, the Mevlevi Sema Ceremony was awarded ‘Intangible Cultural Heritage’ status by UNESCO. 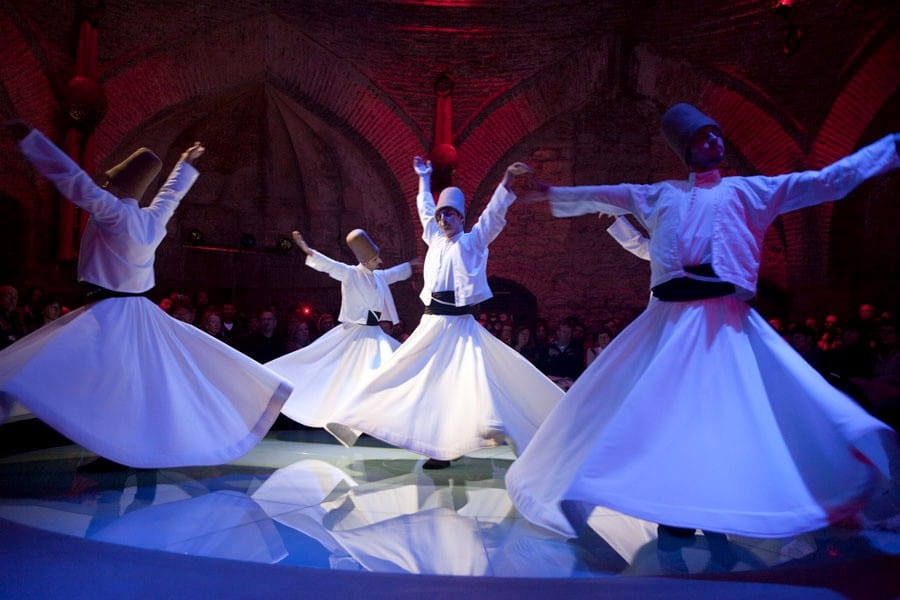 There are various venues in Istanbul where you can watch the Mevlevi Sema Ceremony such as the Hodjapasha Cultural Center and Galata Mevlevi Museum. I recommend checking their websites or calling in advance to confirm schedules and ticket prices.

Bear in mind that the ceremony is religious and spiritual, so don’t clap, speak loudly, photograph, stand up, leave your seat or do anything distracting when the ceremony has begun.

Importantly, don’t expect to be entertained with a song and dance type show; go with an open mind and you’ll enjoy the experience. Undoubtedly, this was one of my favorite things to do in Istanbul.

If you’re curious or interested to know what the ceremony looks like, here’s a great video I found. However, I must admit that watching it in person is a priceless experience.

Have you seen the dance of the whirling dervishes or another ceremony like it? Is this something you would be interested when traveling to a new place?

Oh wow. I didn't go to one of these shows while in Istanbul. I thought it was just a touristy thing too. Actually, I would have gone, but we were being cheap and didn't want to spend the money. I had no idea it was actually a religious ceremony. Watching the video, I can so see what you mean by them looking like they were in a trance! I just hope this spiritual act isn't going to become cheapened by performing for tourists!

I hope so too but I don't believe it will lose its authenticity or significance. It seems like it's a custom far deeply ingrained in the Mevlevi culture for that to happen.

Very Interesting Blog and Loved learning about its symbolism.i am really enjoy to read this article.thanks for sharing us.

What an awesome thing to witness. I first read about this in a book and was curious so I googled it and watched some videos. I imagine that precisely because it wasn't a show it was spectacular to witness!

It was an amazing experience and it definitely didn't feel like your typical tourist show.

Going to Istanbul in May. I am so happy I stumbled on this post. Loved learning about its symbolism. Bookmarking for later!

Wonderful post Natasha! I always wanted to see them. I only ever saw them on documentaries!

When you write "Importantly, don’t expect to be entertained with a song and dance type show; " i was sorta wondering - did this feel a bit touristy or really like the real deal?

Hi Norman, Thank you for reading! To me, this felt like the real deal- I was mesmerized and I'm not exaggerating at all. However, some members of the audience came away feeling disappointed and found the show boring because they probably expected it to be more 'entertaining', which as I pointed out is not what the ceremony is supposed to be.